One of the most frustrating things about human behavior is that we can receive repeated hints and warnings that if we keep doing what we're doing, bad stuff will happen, then when we continue and bad stuff does indeed happen as predicted, we act all surprised.
We've seen it before with volcanic eruptions, a topic I just dealt with in more detail last week.  As I pointed out, it's impossible (as science currently stands) to predict exactly when volcanoes will erupt, and sometimes they still take us completely by surprise, such as the May 2021 eruption of Mount Nyiragongo in the Democratic Republic of Congo.  But a much better-known example of an eruption geologists saw coming was the March 1980 eruption of Mount Saint Helens, which killed 57 people, a significant fraction of whom were leisure hikers hoping to get close to the mountain, some of whom deliberately went around signs and barricades warning of the danger.
There's something in human nature that makes us say, "Oh, c'mon, that sign isn't meant for me.  We'll be fine."
Which is why we're now in the position of being presented with a study from the University of South Florida confirming what climatologists have been saying for decades -- that anthropogenic climate change, generated by the burning of fossil fuels, is going to melt the on-land ice masses in Antarctica and Greenland, and produce catastrophic sea level rise.
The first person who connected atmospheric carbon dioxide levels with global average temperature was, I shit you not, the Swedish chemist Svante Arrhenius, 126 years ago.  That's how long we've known about this.  It started being the subject of serious study (and concern) in the 1970s, and in the 80s and 90s popularizers such as James Burke and Al Gore brought it to the public notice with (respectively) After the Warming and An Inconvenient Truth.  But it's easy to ignore people if paying attention to them means having to change your lifestyle; easier to listen to knuckle-draggers like Oklahoma Senator James Inhofe, who famously brought a snowball onto the floor of the Senate as "proof" that the world wasn't warming up.
Unfortunately for Senator Inhofe, nature continues to operate by the laws of physics and not the financial interests of the fossil fuel industry, because the temperature has continued to climb.  And just last week, a new study in Nature has shown that the Thwaites Glacier in Antarctica has lost contact with the rocky basin it rests on, and is in the process of collapse -- something that could raise global sea levels by three meters.
"Thwaites is really holding on today by its fingernails," said marine geophysicist and study co-author Robert Larter from the British Antarctic Survey.  "We should expect to see big changes over small timescales in the future -- even from one year to the next -- once the glacier retreats beyond a shallow ridge in its bed."
If that doesn't drive the point home hard enough, the authors point out that according to the United Nations, roughly forty percent of the human population lives within a hundred kilometers of the coast. 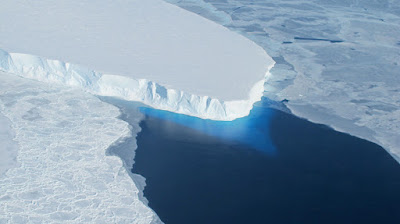 The edge of Thwaites Glacier [Image is in the Public Domain courtesy of NASA]
I feel like the climatologists, and also science writers like myself, have been jumping up and down yelling ourselves hoarse for years trying to get people to wake up, and for God's sake, do something.  But the USF study is the most recent indication that whatever window we had to mitigate the effects of human-induced climate change might well have closed.  I hate to be a doom-and-gloom purveyor, and I wish I had good news; but at the moment, this is what we have.  We've allowed people like Senator Inhofe and their mouthpieces over at Fox News to convince the public that somehow we climate activists want bad things to happen, so we're exaggerating them for our own malign purposes.  And all the while, the voters have been climbing over the signs saying "Danger, Do Not Proceed Past This Point," saying, "Ha ha, this can't be meant for me."
I'm very much afraid that the result is we're in the latter half of "Fuck around and find out."
****************************************