No butts about it

The early Cambrian Period was known for having some weird-looking animals, but even by Cambrian standards, Saccorhytus coronarius was pretty bizarre.

The name is a Greek and Latin composite that means, more or less, "wrinkled bag with a crown," and as disparaging as it sounds I have to admit it's pretty accurate.  The reconstruction of it from various fossils makes it look like a design for a new Pokémon that was rejected on the basis of being too outlandish: 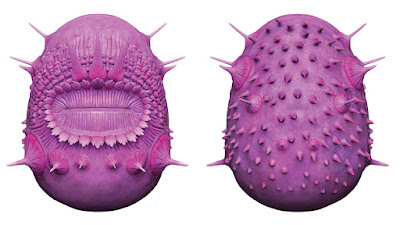 One thing you'll notice about it is that it has no anus.  This, by itself, isn't as odd as it sounds; whole phyla of animals, notably Cnidaria (which includes jellyfish and sea anemones) and Platyhelminthes (flatworms) only have one opening in their digestive tract, meaning once they finish digesting their dinner, they spit the undigested bits out of their mouths.  This lack of a nether orifice has made poor Saccorhytus the butt of many jokes, and in fact I was going to title this post "Assless chaps" but was informed that the more prudish members of my readership might take that the wrong way.
Be that as it may, the spikes combined with its other weird features made it hard to classify.  The first Saccorhytus fossils seemed to have additional holes near the mouth, which initially were thought to be openings for gills but later turned out to be  places where spines had broken off during fossilization.  This has altered our understanding of where it fits on the animal family tree; initially, the supposed gill slits suggested it might be related to deuterostomes (including starfish, sea urchins, sand dollars, and vertebrates).  The fact that this was an artifact of fossilization, coupled with some new research, has placed it instead amongst the Ecdysozoa.  Ecdysozoa is Greek for "animals that get undressed" (speaking of undignified scientific names) because of their ability to shed and regrow their exoskeletons, and includes the familiar phyla Arthropoda, Nematoda, and Tardigrada, as well as less-well-known groups like Priapulida ("penis worms"), which takes "undignified names" to the next level.

Here's the current best-supported arrangement for known animal groups, with the Saccorhytus's branch shown in red: 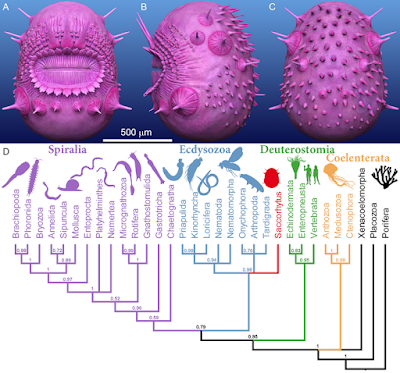 So that's today's news from the No Ifs, Ands, or Butts department.  (Sorry, I'll stop with the middle-school humor.  Probably.)  Saccorhytus isn't a close relative of ours, but more allied to insects and roundworms.  Still, the lack of a hind end means it's not exactly a comfortable fit in that group either.  Of course, "if you haven’t got an anus," said study lead author Philip Donoghue of the University of Bristol, "you’re not going to be very comfortable anywhere."

Okay, look, that one wasn't my fault.  The scientist himself said it.