In a rather startling coincidence, just yesterday I wrote about how much the course of human evolution was constrained by our evolving in a place that had large predators, scarce resources, and seasonal drought, and almost simultaneously a paper was published in Nature Geoscience about exactly that.

A huge interdisciplinary team of geoscientists, sedimentologists, micro-paleontologists, geologists, geographers, geochemists, archaeologists, chronologists, evolutionary biologists, and climate modelers led by Verena Foerster of the University of Cologne set themselves a mammoth task -- to correlate shifts in climate in East Africa over the past 620,000 years with patterns of population growth, evolution, and dispersal amongst the hominin species that lived there.

Starting with two 280-meter-long continuous sediment cores from the Chew Bahir Basin in southern Ethiopia, the team was able to analyze not only the sediment geology and chemistry, but such things as pollen and seed types, fossil content, and rate of deposition to infer what the climate was doing at the time.  What they found was that from 620,000 to 275,000 years ago, the climate was amazingly stable -- warm and humid -- but that interspersed through that time were short, abrupt, extreme drought phases.  These "arid pulses" led to sudden habitat fragmentation, as the climatic shifts didn't hit everywhere at once (nor with equal severity).  Some areas remained relatively wetter, while other areas not that far away were experiencing catastrophic drought.

When this happens -- a large swath of relatively uniform habitat becomes unstable and/or patchy -- it generally has two results; (1) animals become more mobile, migrating in search of resources that are now less reliable; (2) organisms less capable of moving undergo strong selective pressure to adapt to "the new normal."  Both of these affected our ancient relatives.  Some began to disperse more widely, presumably seeking out food and water, while others diversified in response to their new local climatic conditions, leading to rapid speciation.

Following this, the East African climate began to undergo more regular oscillations between congenial and hostile.  Wet phases, with abundant vegetation and deep freshwater lakes, alternated with dry phases during which the lakes evaporated almost completely, leaving only highly saline, alkaline ponds.  During this time, the Acheulean hand axe culture of the Lower Paleolithic (associated with our predecessor species Homo ergaster) was superseded by more sophisticated technologies and the emergence of modern Homo sapiens about sixty thousand years ago. 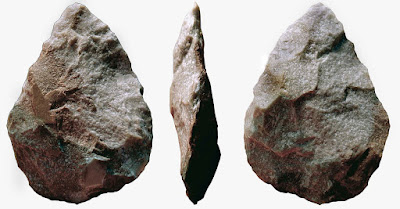 Things only got dicier from there.  Between sixty and ten thousand years ago -- the highest layers of the sediment cores -- East Africa saw the most arid phase in the entire record.  This had two effects -- driving our ancestors out of Africa in search of better conditions, and triggering the extinction of virtually all our near relatives.  We won, apparently, by dint of our mobility and large brains, allowing us to cope with hostile and rapidly fluctuating conditions, eventually leading to our dispersing to every habitable land on Earth.

It's fascinating to me that we owe our own existence to fluctuations in the climate -- that the conditions in one part of the world molded us into the species we currently are.  Now that we have technology to avoid many of the caprices of the environment, we are also shielded from their evolutionary effects; you have to wonder how (or if) our distant descendants will be altered by climate shifts, more specifically those we ourselves are perpetrating.  It once again brings home the truth of the perspective that each species is not a separate entity, but is part of an intricate tapestry of life.  Pull on one thread, and the others will inevitably, and irrevocably change -- for good or ill.