When I saw a headline over at Science News that contained the phrase "Ancient Demon Ducks," I knew I had found my topic for the day.

The article turned out to be about some recent research into a group of birds called dromornithids, which lived in Australia for about twenty million years, only becoming extinct about forty thousand years ago (thus overlapping the earliest ancestors of the Indigenous Australians by a short period).  Besides being referred to as "the demon ducks of doom" (I'm not making that up), these birds are also called mihirungs, from the Djab Wurrung words mihirung paringmal, meaning "giant bird."

Giant they certainly were.  Stirton's thunderbird (Dromornis stirtoni) reached three meters tall and could weigh over five hundred kilograms.  This puts it in second place to the much more recent Madagascar elephant bird (Aepyornis spp.), which could reach two hundred kilograms heavier than that, and still existed only a thousand years ago. 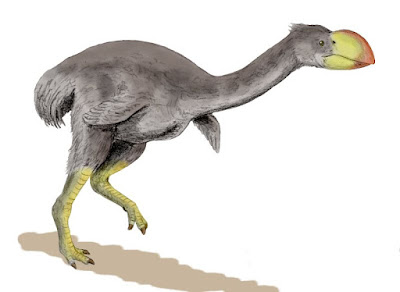 A reconstruction of Dromornis stirtoni [Image licensed under the Creative Commons Nobu Tamura (http://spinops.blogspot.de), Dromornis BW, CC BY-SA 3.0]
I realize this doesn't look much like any duck you've ever seen, but apparently genetic analysis of fossils has established that the dromornids are most closely related to modern waterfowl.  Once again showing that appearance is not a very good indicator of genetic relationships.
The current research finds that the mihirungs may have been done in by a trait in common with several other large bird species -- slow growth rate.  The mihirungs, along with the elephant birds, the dodo, and the great auk, seem to have reached maturity slowly, in the case of mihirungs perhaps as long as fifteen years.  Time to maturity is inversely proportional to minimum viable population, the smallest number of individuals that (if conditions remain stable) could potentially stay in equilibrium or even increase, because if something starts killing them off, the population can only recover if the remaining individuals can reach sexual maturity fast enough to reproduce and replace the ones that have died.  The remaining large bird species -- ostriches, emus, and cassowaries, for example -- are all much faster to reach reproductive maturity, and have many more offspring at a time.  The slow-growing, slow-reproducing mihirungs just couldn't deal with a spike in the death rate.
And what caused that spike seems to be the same thing that did in the elephant birds, dodos, and great auks; overhunting by humans.  Eggshells of mihirungs have been found that show signs of having been cooked, and there is Indigenous art from the earliest human settlers of Australia that appear to show mihirungs amongst other animals that were targets of hunting.  So sad to say, but the weird "demon ducks of doom" were probably themselves doomed by the arrival of humans.
You have to wonder what the world would look like if humans had never come on the scene.  It's not only weird big species like the dromornids that might still be around; right where I live we'd almost certainly have passenger pigeons (Ectopistes migratorius), once the most common bird in eastern North America, hunted to extinction in the nineteenth century; and the pretty little Carolina parakeet (Conuropsis carolinensis), slaughtered because of their habit of eating fruit crops and declared extinct in 1939.
What's gone's gone, of course, and we should be putting our time and effort into conserving what we still have; but I can't help but wish we'd been more careful all along.  Well over 99% of all the species that have ever lived have become extinct for one reason or another, so in the long haul, extinction is unavoidable; to paraphrase Fight Club, on a long enough time scale, the survival rate of species in general is zero.  Still, it's amazing to think of what once was -- including the five-hundred-kilogram demon ducks of Australia.
****************************************