It's been a while since I've looked at a truly loopy claim, so today we're going to give our attention to one just posted this week over at the ever-entertaining site Mysterious Universe that was sent to me by a loyal reader of Skeptophilia along with the message, "Get yourself a big glass of wine, sit down, and fasten your fucking seatbelt."

It was good advice.  The article is entitled, "The Strange, Hybrid Fish-Men and Bird-Men of Mesopotamian Art: Who Were They?", and one would think the text that followed would say, "They were fictional.  The end."

One would be wrong.

While I'm sure that the connections between all of the above are glaringly obvious to anyone with reasonable perspicacity, somehow I still don't get it even after reading the article all the way through.  Twice.  The best I can come up with is that the Sumerians believed in these dudes called Apkallu who were not only supposed to be super-intelligent but were hybrid human-fish beings.  It's uncertain where they come from, but one possibility the author considers is that they came from underground aquifers, which he apparently pictures as being like giant subterranean lakes, instead of what they actually are, which is waterlogged porous rock, and therefore not really something a hybrid fish-man could swim around in.  But he then takes a look at other possibilities for their origin, such as Jupiter's moon Europa, which is thought to have a liquid ocean:

If alien fishes may live in the underground oceans of other planets, then why not fish-men hybrids like the Apkallu?  If such beings from other planetary or stellar systems arrive on the Earth, wouldn’t they prefer to build their habitat in an environment similar to their home planet or star?  Which, in this case, would be the subterranean aquifers of the Earth.

I read this whole part with the following expression: 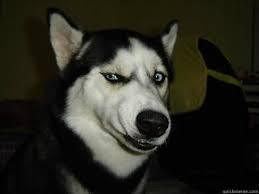 But it only got worse from here.  He brought in the fact that lots of other cultures have traditions of gods or spirits or creator-beings coming from the water as support for the fact that our agricultural aquifers might be home to fish people from Europa, and then launches into where else in the universe they might be from.  His conclusion, after studying the Indian Vedic literature, is that the most likely place is the Big Dipper, known to astronomers as the constellation Ursa Major (the Great Bear).  Even though the Big Dipper isn't really a place you can be from because it's composed of stars all at greatly varying distances from the Earth, and that only appear to be near each other because of our perspective: 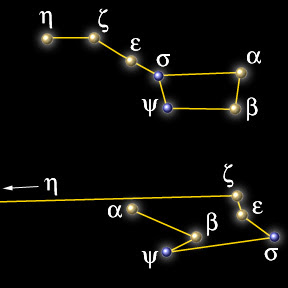 We're then told that the Pope's funny hat has the shape it does because it's supposed to be an open-mouthed fish, so secretly commemorating the super-intelligent fish-men, even though the history of the papal headgear is pretty well documented.  But "damn the facts, full steam ahead!" seems to be this guy's motto, as we find out shortly thereafter when he talks about the Wandjina, rain gods that were part of the belief system of the Indigenous Australians near Kimberley, and says that the -djin- part of Wandjina is connected to the Arabic djinn, variously translated as "spirits" or "demons" (anglicized to "genie").

But here the author breaks a fundamental rule, to wit: do not fuck around with a linguist.  Just because the same four letters occur in Wandjina and djinn does not mean they are cognates.  Linguistics is not some kind of weird combination of free association and the Game of Telephone, something I would be happy to expound upon at greater length, given that this was basically the take-home message of my master's thesis.  The languages of the native Australians have zero connection with Arabic, and in fact, damn little connection with each other; there are at least 250 non-mutually-intelligible languages in Australia, which (as far as recent scholarship tells us) belong to thirteen different language families and isolates.

And none of them are related to Arabic.

Well, my response to the article is rapidly approaching the length of the article itself, and I haven't even gotten to the comets and the pine cones and Masaru Emoto's happy ice crystals.  I guess you'll just have to slog your way through the article yourself if you want to find out more.

Me, I'm ready to think about something else for a while.  After I finish my glass of wine and figure out how to get this seatbelt unbuckled.