The will to fight

If you're fortunate enough not to suffer from crippling depression and anxiety, let me give you a picture of what it's like.

Last week I started an online class focused on how to use TikTok as a way for authors to promote their books.  So I got the app and created an account -- it's not a social media platform I'd used before -- and made my first short intro video.  I was actually kind of excited, because it seemed like it could be fun, and heaven knows I need some help in the self-promotion department.  (As an aside, if you're on TikTok and would like to follow me, here's the link to my page.)

Unfortunately, it seemed like as soon as I signed up, I started having technical problems.  I couldn't do the very first assignment because my account was apparently disabled, and that (very simple) function was unavailable.  Day two, I couldn't do the assignment because I lacked a piece of equipment I needed.  (That one was my fault; I thought it was on the "optional accessories" list, but I was remembering wrong.)  Day three's assignment -- same as day one; another function was blocked for my account.  By now, I was getting ridiculously frustrated, watching all my classmates post their successful assignments while I was completely stalled, and told my wife I was ready to give up.  I was getting ugly flashbacks of being in college physics and math classes, where everyone else seemed to be getting it with ease, and I was totally at sea.  When the same damn thing happened on day four, my wife (who is very much a "we can fix this" type and also a techno-whiz), said, "Let me take a look."  After a couple of hours of jiggering around with the settings, she seemed to have fixed the problem, and all the functions I'd been lacking were restored.

The next morning, when I got up and got my cup of coffee and thought, "Okay, let me see if I can get started catching up," I opened the app and it immediately crashed.

Tried it again.  Crash.  Uninstalled and reinstalled the app.  Crash. 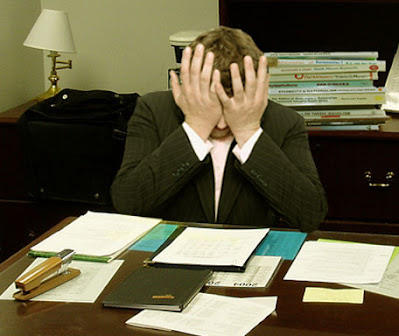 I think anyone would be frustrated at this point, but my internal voices were screaming, "GIVE UP.  YOU SHOULD NEVER HAVE SIGNED UP FOR THIS.  YOU CAN'T DO IT.  IT FIGURES.  LOSER."  And over and over, like a litany, "Why bother.  Why bother with anything."  Instead of the frustration spurring me to look for a solution, it triggered my brain to go into overdrive demanding that I give up and never try again.

When I heard my wife's alarm go off an hour later, I went and told her what had happened, trying not to frame it the way I wanted to, which was "... so fuck everything."  She sleepily said, "Have you tried turning your phone completely off, then turning it back on?"  Ah, yes, the classic go-to for computer problems, and it hadn't occurred to me.  So I did...

But now I was on day five of a ten-day course, and already four assignments behind.  That's when the paralyzing anxiety kicked in.  I had told the instructors of the course a little about my tech woes, and I already felt like I had been an unmitigated pest, so the natural course of action -- thinking, "you paid for this course, tell the instructors and see if they can help you catch up" -- filled me with dread.  I hate being The Guy Who Needs Special Help.  I just want to do my assignments, keep my head down, fly under the radar, be the reliable work-horse who gets stuff done.  And here I was -- seemingly the only one in the class who was being thwarted by mysterious forces at every turn.

So I never asked.  The more help I needed, the more invisible I became.  It's now day seven, and I'm maybe halfway caught up, and I still can't bring myself to tell them the full story of what was going on.

Adversity > freak out and give up.  Then blame yourself and decide you should never try anything new ever again.  That's depression and anxiety.

I've had this reaction pretty much all my life, and it's absolutely miserable.  It most definitely isn't what I was accused of over and over as a child -- that I was choosing to be this way to "get attention" or to "make people feel sorry for me."  Why the fuck would anyone choose to live like this?  All I wanted as a kid -- all I still want, honestly -- is to be normal, not to have my damn brain sabotage me any time the slightest thing goes wrong.  As I told my wife -- who, as you might imagine, has the patience of a saint -- "some days I would give every cent I have to get a brain transplant."

So re: TikTok, if Carol hadn't been there, I'd have deleted my account and forfeited the tuition for the class.  But I'm happy to report that I haven't given up, and I've posted a few hopefully mildly entertaining videos, which I encourage you to peruse.

The reason all this comes up, though, isn't just because of my social media woes.  I decided to write about this because of some research published this week in the journal Translational Psychiatry which found that a single gene -- called Tob -- seems to mediate resilience to emotional stress in mice, and without it, produces exactly the "freak out and give up" response people have when they suffer from depression and anxiety.

Tob was already the subject of intense research because it apparently plays a role in the regulation of the cell cycle, cancer suppression, and the immune system.  It's known that in high-stress situations, Tob rapidly switches on, so it is involved somehow in the flight-fight-freeze response.  And a team led by Tadashi Yamamoto of the Okinawa Institute of Science and Technology found that "Tob-knockout mice" -- mice that have been genetically engineered to lack the Tob gene -- simply gave up when they were in stressful situations requiring resilience and sustained effort.  Put another way, without Tob, they completely lost the will to fight.

When I read this article -- which I came across while I was in the midst of my struggle with technology -- I immediately thought, "Good heavens, that's me."  Could my tendency to become frustrated and overwhelmed easily, and then give up in despair, be due to the underactivity of a gene?  I know that depression and anxiety run in my family; my mother and maternal grandmother definitely struggled with them, as does my elder son.  Of course, it's hard to tease apart the nature/nurture effects in this kind of situation.  It's a reasonable surmise that being raised around anxious, stressed people would make a kid anxious and stressed.

But it also makes a great deal of sense that these familial patterns of mental illness could be because there's a faulty gene involved.

Research like Yamamoto et al. is actually encouraging; identifying a genetic underpinning to mental illnesses like the one I have suffered from my entire life opens up a possible target for treatment.  Because believe me, I wouldn't wish this on anyone.  While fighting with a silly social media platform might seem to someone who isn't mentally ill like a shrug-inducing, "it's no big deal, why are you getting so upset?" situation, for people like me, everything is a big deal.  I've always envied people who seem to be able to let things roll off them; whatever the reason, if it came from the environment I grew up in or because I have a defective Tob gene, I've never been able to do that.  Fortunately, my family and friends are loving and supportive and understand what I go through sometimes, and are there to help.

But wouldn't it be wonderful if this kind of thing could be fixed permanently?