One of the most wonderful things about science is the role creativity has in discovery.  Problems that have been considered somewhere between difficult and intractable have often been solved by someone who has a sudden creative insight -- how to bring together two previously disparate bodies of knowledge, or using a technique from one realm to study an entirely different one.

Take, for example, the study that was sent my way by a reader of Skeptophilia a couple of days ago.  It has to do with the technique of paleomagnetism -- the "geological clock" provided by the fact that the Earth's magnetic field flips, for (thus far) reasons unknown.  You're probably familiar with the most famous use of paleomagnetism; it was the technique that finally cinched down the plate tectonic model as accounting for continental drift.  When magma solidifies into solid rock, tiny ferromagnetic particles that were once free to move become locked into place.  When the rock was liquid, those particles could swivel around and line up with the magnetic field of the Earth at the time; once solid, that magnetic signature was frozen in place.  When geologists doing magnetometer readings of the ocean floor on either side of the Mid-Atlantic Rift Zone found parallel stripes of rocks with the same magnetic signature, and the rock as they neared the ridge had progressively younger radioisotope ages, they knew that there was only one explanation.  New rock was welling up at the ridge from deep in the mantle, and that was pushing the plates apart, creating strips of new ocean floor all along the ridge. 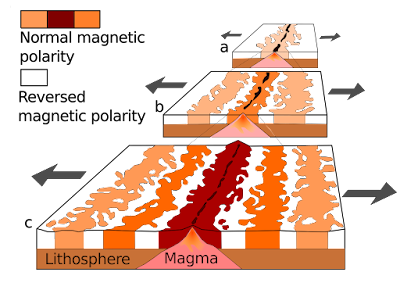 [Image is in the Public Domain courtesy of the USGS]

Now, a new study has applied paleomagnetic techniques to a completely different problem.  A team at Tel Aviv University and the Hebrew University of Jerusalem has looked at the magnetic signature left in fired clay bricks -- and used it to date archaeological strata in order to pinpoint the dates of famous battles described in the Biblical Books of Kings.

Clay retains a fossilized magnetic imprint for the same reason that magma does; when the clay is plastic, the particles are free to move, but once it's fired, they're stuck in place.  What's coolest about this study, though, is how sensitive the technique has become.  Back in the 1950s, when Fred Vine and Drummond Matthews used paleomagnetism to study the sea floor, it was pretty crude.  The best they could do was say that a particular sample of rock had a magnetic field like the one we have today (shown in white on the above image) or one that was reversed with comparison to the current orientation (shown in various shades of orange).  This wouldn't be much help in archaeological settings, as the last complete polar reversal was 780,000 years ago.  Now, the technique has improved to the point that the scientists can detect tiny fluctuations not only in direction but in strength -- and that has allowed them to date strata with an accuracy of ten to fifteen years.

This has allowed the team to pinpoint firm dates of offensives against the Kingdom of Judah by Shoshenq I of Egypt (1 Kings 14: 25-26), Hazael of Damascus (2 Kings 12:18), Tiglath-Pileser III (2 Kings 15:29) and Sennacherib (2 Kings 18-19) of Assyria, and Nebuchadnezzar II of Babylon (2 Kings 25:1-21).  And while some of the findings confirmed previous dates for sites, the more accurate technique has disproven other conjectures.  For example, the site of Tel Beit She'an, thought to have been razed by Hazael of Damascus, showed a paleomagnetic date between seventy and a hundred years earlier, meaning it had fallen not to Hazael but to the campaign of Shoshenq of Egypt.

It's not only the fineness of the technique I find impressive, but the fact that the team thought of using it at all.  Creativity hinges on divergent thinking -- the ability to see multiple solutions to a problem, and to apply out-of-the-box techniques in order to find those solutions.  This is an excellent example of just that -- using a technique first pioneered in studies of plate tectonics to establish a timeline of biblical archaeology more accurate than anything we've had.

Makes you wonder what crossovers scientists will come up with next.