As long-time readers of Skeptophilia know, it really torques my lug nuts when people take perfectly good scientific terms, re-define them however the fuck they like, and then pretend what they're saying makes sense.

The list of terms this has happened to is a long one, and includes frequency, resonance, quantum (lord, how they do love the word quantum), and vibration, to name a few.  But there's none that bothers me quite as much as the rampant misuse of the word dimension.

Part of the reason this one gets to me is that the concept of a dimension is so simple that you'd think it'd be hard to get wrong.  If you go to the Wikipedia article about the term, you will read in the very first line, "In physics and mathematics, the dimension of a mathematical space (or object) is informally defined as the minimum number of coordinates needed to specify any point within it."  The space we live in is three-dimensional because to define the location of a point, you need to know where it lies referent to three directions -- up/down, back/front, and right/left.

This hasn't stopped people from taking the term and running right off the cliff with it.  And it's not a new phenomenon.  I remember an episode of the abysmal 1960s science-fiction series (heavy on the fiction, light on the science) Lost in Space called "Invaders from the Fifth Dimension," wherein Will Robinson was kidnapped by a pair of evil aliens who looked like the love children of Matt Gaetz and Herman Munster. 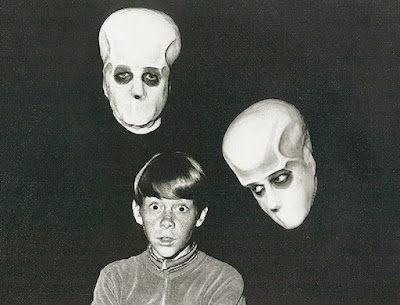 These aliens told Will they were "from the fifth dimension," which makes about as much sense as if your Uncle Fred told you he was from "horizontal."  Be that as it may, after they captured Will they revealed to him their nefarious plan, which was to use his brain to power their spaceship.  Things looked bad, but Will defeated them by (I swear I am not making this up) feeling sad at them, which caused their spaceship to blow up.
So using the word "dimension" as a fancy way of saying "a mysterious place somewhere" goes back a long way.  But because of a loyal reader of Skeptophilia, I just read what has to be the single most ridiculous example of this I've ever seen.

And that includes "Invaders from the Fifth Dimension."

It's an article in Your Tango called "The Theory That Claims We Visit Other Dimensions While We Sleep," by NyRee Ausler.  Which brings up another misused word that really bothers me, which is "theory."  A theory is not "this crazy idea I dreamed up just now," and nor does it mean "a guess that could just as easily be right as wrong."  A theory is model with strong explanatory and predictive power, and which fits all the available data and evidence we have at hand.  When the creationists say, breezily, "Evolution is just a theory," that is not some kind of point in their favor; all it shows is that they have no idea what the word actually means.

After all, we call it "music theory" and that's not because we think music may not exist.

Anyhow, back to NyRee Ausler.  It will come as no shock to find out that she answers her question, "do we visit other dimensions while we dream?" with, "Yes, of course we do."  The way we know, she says, is that the laws of physics aren't the same in dreams as they are in reality.  I can vouch at least for that much.  I dreamed last night that I was out working in my garden, and I kept accidentally digging up plants and knocking things over and generally wreaking havoc, but then when I was done not only was everything back to normal, but all the flowers were blooming despite the fact that it's currently December and the high temperature today is supposed to be 13 F.

In any case, her point that "dreams are fucking weird" hardly needs further elucidation, but she goes on to say that the reason for all this is that dreams take place in another dimension.  And then she launches into a brief description of -- I shit you not -- string theory, which is a mathematical model of subatomic physics requiring ten spatial dimensions, all but three of which are thought to be (very) submicroscopic and "curled up."  The analogy commonly used is an ant on a garden hose -- it can go along the hose (one stretched-out dimension), or around the hose's circumference (one curled-up dimension).  The string theorists claim that three of the dimensions in our universe are of the stretched-out variety, and seven are curled up so tightly that we don't experience them on a macroscopic scale, but influence quantum phenomena such as how particles interact at very high energies.

And yes, what NyRee Ausler is saying is that when you dream, you are somehow visiting these extremely tiny, curled-up dimensions, and that's why dreams are peculiar.  Once again, acting as if these extra dimensions were places, not just mathematical constructs describing spatial coordinates.

But it gets even better than that, because she goes on to tell us what each of those dimensions are like, one by one.  I direct you to the original link if you want to read about them all, but here's one, just to give you the flavor:

The sixth dimension consists of a straight line of possible worlds. Here, you get an opportunity to access all possible worlds that started with the same original conditions, like the Big Bang Theory.  It is known as the "phase space" in a set of parallel universes where everything that could have happened in our pasts, but did not, occurred in some other universe.  The sixth dimension exists in the same space and time as the one we occupy, an overlay of our universe or a 3-D space containing every possible world.

What made me laugh the hardest is that she tried to give her article an extra soupçon of scienc-y-ness by mentioning Calabi-Yau manifolds, an extremely complex concept from higher-dimensional algebraic geometry, because lobbing in a technical term you obviously don't understand clearly strengthens your argument.

I know it's probably a waste of energy for me to spend my time railing about this, but there are people who will read this and think it's actual science.  And that bugs the absolute hell out of me.  The thing is, her article is not just wrong, it's lazy.  As I demonstrated above, all you have to do is to take the time to read the first paragraph of a damn Wikipedia page to see that what Ausler is claiming is blatant horse waste.

But science is hard, and technical, and to really understand it requires reading peer-reviewed journal articles and learning terminology and mathematics.  Easier to blather on about string theory and dimensions and (*snerk*) Calabi-Yau manifolds as if you knew what you were talking about, and hope that enough people click on the link that the ad revenue will pay for your groceries next month.

So anyhow, thanks to the reader who sent me the article.  I did get a couple of good laughs out of it, but the overall teeth-grinding I did while reading it probably resulted in net damage to my emotional state.  Pseudoscience will be with us always, springing up like mushrooms after a summer rain.  Or like my garden on a frigid day in December, at least in my sixth-dimensional dreams.