I'm beginning to think that the aliens who are running the computer simulation we've all been trapped in for the past few years have gotten bored and/or stoned, and now they're just fucking with us.

I say this because of recent developments in American politics, which was weird enough already.  By now you've undoubtedly heard about Donald Trump spending a couple of weeks hyping up a "big exciting announcement" both on his bizarre site "Truth Social" and on Twitter (now that Elon Musk has seen fit to allow him to reprise his award-winning role as Cheeto von Tweeto).  A lot of folks thought it might be some sort of serious political strategy move, such as revealing who he had chosen as his running mate for the 2024 presidential election.  This, of course, could have been a bizarre spectacle as well; speculation was running rampant that he would choose Kari Lake, the unsuccessful Republican candidate for governor of Arizona, whose campaign slogan was, "I DID TOO WIN!  YOU'RE A BUNCH OF BIG STUPID LOSERS!  WAAAAAAAH!"

Which makes me wonder how these people don't see the contradiction between their shrieking at the education system as fostering an "everybody gets a gold star" mindset, and at the same time stating that their favorite candidate in an election should be declared winner despite getting way fewer votes.  Cognitive Dissonance "R" Us, these people.

Anyhow, by now you know that Trump's "big exciting announcement" was that he was selling NFT digital trading cards of "art" (I use the term loosely) of himself dressed up like a superhero, a cowboy, a prizefighter, and so on, at $99 a pop.  My first thought was, "Who in their right mind would spend their hard-earned cash on this?  This is the dumbest idea he's come up with yet."

"Ha ha," said the aliens running the simulation.  "A lot you know."  All forty-five thousand cards sold within twelve hours.

This didn't stop the good folk of the internet from lobbing enormous ridicule bombs Trump's way.  One wag called the cards "MAGA the Gathering."  Another labeled them "Brokémon Cards."  Then the digital artists got involved, and created their own, more realistic Trump trading cards, such as the following: 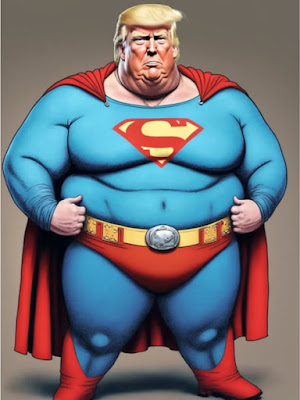 Then we had the fight between one-time allies Lauren Boebert and Marjorie Taylor Greene, who have been sparring over support for Speaker of the House candidate Kevin McCarthy.  Boebert suggested that she might have qualms about supporting McCarthy's bid -- evidently she thinks he's too moderate -- and Greene retorted that Boebert had turned her back on not only McCarthy, but Donald Trump and the Republican party.
Boebert fired back with something that I am quoting here verbatim, because otherwise you flat out won't believe me: "Well, you know, I’ve been aligned with Marjorie and accused of believing a lot of the things that she believes in.  I don’t believe in this, just like I don’t believe in Russian space lasers, Jewish space lasers, and all of this."

Then there was Lavern Spicer, unsuccessful candidate for Representative of Florida's 24th District, who spoke out vehemently against people introducing themselves including the pronouns they wish others to use for them, and made two statements on Twitter -- one, that there are "no pronouns in the Bible," and the other that "Jesus didn't use pronouns."
Is it just me, or do these people honestly have no idea what a pronoun is?
Here's just one example of a passage from Lavern Spicer's pronoun-less version of the Bible, from Luke 6:32:

It reminds me of the Seinfeld episode about the guy who always talks about himself in third person, and George Costanza picking up the habit.  "George is not happy."

In any case, I'd like to put the aliens on notice that we down here on Earth are getting kind of fed up with all this.  I mean, enough already.  I know it must be fun watching us, especially the marginally rational fraction of humanity skittering about trying to figure out how in the hell to make sense of the insane chaos we're immersed in, but really.  Y'all have had your laughs at our expense.
Time to put the bong away, shut off the simulation, and call it a day.
****************************************