One topic I've come back to over and over again here at Skeptophilia is how flawed our sensory/perceptive apparatus is.  Oh, it works well enough; most of the time, we perceive the external world with sufficient clarity not to walk into walls or get run over by oncoming trains.  But our impression that we experience the world as it is -- that our overall ambient sense of everything around us, what the brilliant neurophysiologist David Eagleman calls our umwelt, is a crystal-clear reflection of the real universe -- simply is false.

All it takes is messing about with optical illusions to convince yourself how easy our brains and sensory organs are to fool.  For example, in the following drawing, which is darker; square A or square B? 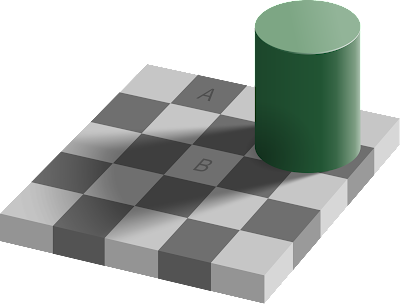 They're exactly the same.  Don't believe me?  Here's the same drawing, with a pair of gray lines superimposed on it:

Because your brain decided that B was in the shadow and A wasn't, then it concluded that A had to be intrinsically darker.  What baffles me still about this illusion is that even once you know how the trick works, it's impossible to see it any other way.

As astronomer Neil deGrasse Tyson put it, "Our brains are rife with ways of getting it wrong.  You know optical illusions?  That's not what they should call them.  They should call them brain failures.  Because that's what they are.  A few cleverly drawn lines, and your brain can't handle it."

Well, we just got another neat hole shot in our confidence that what we're experiencing is irrefutable concrete reality with a study that appeared in the journal Psychological Science this week.  What the researchers did was attempt to confound the senses of sight and hearing by showing test subjects a photograph of one object morphing into another -- say, a bird into an airplane.  During the time they studied the photograph, they were exposed to a selection from a list of sounds, two of which were relevant (birdsong and the noise of a jet engine) and a number of which were irrelevant distractors (like a hammer striking a nail).

They were then told to use a sliding scale to estimate where in the transformation of bird-into-airplane the image was (e.g. seventy percent bird, thirty percent airplane).  What the researchers found was that people were strongly biased by what they were hearing; birdsong biased the test subjects to overestimate the birdiness of the photograph, and reverse happened with the sound of a jet engine.  The irrelevant noises didn't effect choice (and thus, when exposed to the irrelevant noises, their visual perceptions of the image were more accurate).

"When sounds are related to pertinent visual features, those visual features are prioritized and processed more quickly compared to when sounds are unrelated to the visual features," said Jamal Williams, of the University of California - San Diego, who led the study, in an interview with Science Daily.  "So, if you heard the sound of a birdsong, anything bird-like is given prioritized access to visual perception.  We found that this prioritization is not purely facilitatory and that your perception of the visual object is actually more bird-like than if you had heard the sound of an airplane flying overhead."
I guess it could be worse; at least hearing birdsong didn't make you see a bird that wasn't there.  But it does once again make me wonder how eyewitness testimony is still considered to carry the most weight in a court of law when experiment after experiment has demonstrated not only how incomplete and easily biased our perceptions are, but how flawed our memories are.
Something to keep in mind next time you are tempted to say "I know it happened that way, I saw it with my own eyes."
****************************************