I've been fascinated with words ever since I can remember.  It's no real mystery why I became a writer, and (later) got my master's degree in historical linguistics; I've lived in the magical realm of language ever since I first learned how to use it.

Languages are full of curiosities, which is my impetus for doing my popular daily bit called #AskLinguisticsGuy on TikTok.  And one of the posts I've done that got the most views was a piece on "folk etymology" -- stories invented (with little or no evidence) to explain word origins -- specifically, that the word "fuck" does not come from the acronym for "Fornication Under Consent of the King."

The story goes that in bygone years, when a couple got married, if the king liked the bride's appearance, he could claim the right of "prima nocta" (also called "droit de seigneur"), wherein he got to spend the first night of the marriage with the bride.  (Apparently this did occasionally happen, but wasn't especially common.)  Afterward -- and now we're in the realm of folk etymology -- the king gave his official permission for the bride and groom to go off and amuse themselves as they wished, at which point he stamped the couple's marriage documents "Fornication Under Consent of the King," meaning it was now legal for the couple to have sex with each other.

This bit, of course, is pure fiction.  The truth is that the word "fuck" probably comes from a reconstructed Proto-Germanic root *fug meaning "to strike."  There are cognates (same meaning, different spelling) in just about every Germanic language there is.  The acronym explanation is one hundred percent false, but you'll still see it claimed (which is why I did a TikTok video on it).

The whole subject of taboo words is pretty fascinating, and every language has 'em.  Most cultures have some levels of taboo surrounding sex and other private bodily functions, but there are some odd ones.  In Québecois French, for example, the swear word that will get your face slapped by your prudish aunt is tabernacle!, which is the emotional equivalent of the f-bomb, but comes (obviously) from religious practice, not sex.  Interestingly, in Québecois French, the English f-word has been adopted in the phrase j'ai fucké ça, which is considered pretty mild -- an English equivalent would be "I screwed up."  (The latter phrase, of course, derives from the sexual definition of "to screw," so maybe they're not so different after all.) 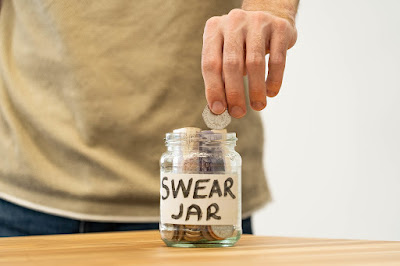 Linguists are not above studying such matters.  I found this out when I was in graduate school and was assigned the brilliant 1982 paper by John McCarthy called "Prosodic Structure and Expletive Infixation," which considers the morphological rules governing the placement of the word "fucking" into other words -- why, for example, we say "abso-fucking-lutely" but never "ab-fucking-solutely."  (The rule has to do with stress -- you put "fucking" before the primary stressed syllable, as long as there is a secondary stressed syllable that comes somewhere before it.)  I was (and am) delighted by this paper.  It might be the only academic paper I ever read in grad school from which I simultaneously learned something and had several honest guffaws.

The reason this whole sweary subject comes up is because of a paper by Shiri Lev-Ari and Ryan McKay that came out just yesterday in the journal Psychonomic Bulletin & Review, called, "The Sound of Swearing: Are There Universal Patterns in Profanity?"  Needless to say, I also thought this paper was just fan-fucking-tastic.  And the answer is: yes, across languages, there are some significant patterns.  The authors write:

Why do swear words sound the way they do?  Swear words are often thought to have sounds that render them especially fit for purpose, facilitating the expression of emotion and attitude.  To date, however, there has been no systematic cross-linguistic investigation of phonetic patterns in profanity.  In an initial, pilot study we explored statistical regularities in the sounds of swear words across a range of typologically distant languages.  The best candidate for a cross-linguistic phonemic pattern in profanity was the absence of approximants (sonorous sounds like l, r, w and y).  In Study 1, native speakers of various languages judged foreign words less likely to be swear words if they contained an approximant.  In Study 2 we found that sanitized versions of English swear words – like darn instead of damn – contain significantly more approximants than the original swear words.  Our findings reveal that not all sounds are equally suitable for profanity, and demonstrate that sound symbolism – wherein certain sounds are intrinsically associated with certain meanings – is more pervasive than has previously been appreciated, extending beyond denoting single concepts to serving pragmatic functions.

The whole thing put me in mind of my dad, who (as befits a man who spent 29 years in the Marine Corps) had a rather pungent vocabulary.  Unfortunately, my mom was a tightly-wound prude who wrinkled her nose if someone said "hell" (and who couldn't even bring herself to utter the word "sex;" the Good Lord alone knows how my sister and I were conceived).  Needless to say, this difference in attitude caused some friction between them.  My dad solved the problem of my mother's anti-profanity harangues by making up swear words, often by repurposing other words that sounded like they could be vulgar.  His favorite was "fop."  When my mom would give him a hard time for yelling "fop!" if he smashed his thumb with a hammer, he would patiently explain that it actually meant "a dandified gentleman," and after all, there was nothing wrong with yelling that.  My mom, in desperate frustration not to lose the battle, would snarl back something like, "It doesn't mean that the way you say it!", but in the end my dad's insistence that he'd said nothing inappropriate was pretty unassailable.

Interesting that "fop" fits into the Lev-Ari/McKay phonetic pattern like a hand in a glove.

Anyhow, as regular readers of Skeptophilia already know, I definitely inherited my dad's salty vocabulary.  But -- as one of my former principals pointed out -- all they are is words, and what really matters is the intent behind them.  And like any linguistic phenomenon, it's an interesting point of study, if you can get issues of prudishness well out of the damn way.