Humans, chimps, and bonobos share a little over 99% of their DNA.

That remaining just-under-one-percent accounts for every physical difference between you and our nearest ape relatives.  It's natural enough to be surprised by this; we look and act pretty different from them most of the time.  (Although if you've read Desmond Morris's classic study The Naked Ape, you'll find there's a lot more overlap between humans and apes behaviorally than you might have realized.) 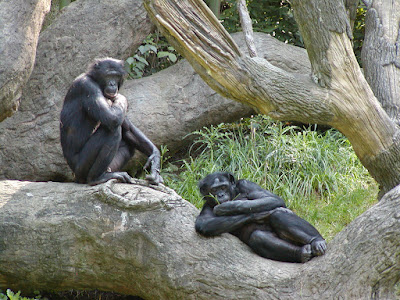 Part of that sense of differentness is from the cultural context most of us grew up in -- that "human" and "animal" are two separate categories.  In a lot of places that comes from religion, specifically the idea that the Creator fashioned humans separately from the rest of the species on Earth, and that separation persists in our worldviews even for many of us who no longer believe in a supreme deity.  The truth is we're just another branch of Kingdom Animalia, Phylum Chordata, Class Mammalia, Order Primata, albeit a good bit more intelligent and technologically capable than most of the other branches.

It's that last bit that has captured the curiosity of evolutionary geneticists for decades.  The similarities between ourselves and apes are obvious; but where did the differences come from?  How could less than one percent of our DNA be responsible for all the things that do set us apart -- our larger brains, capacity for language, upright posture, and so on?

Just last week, a paper in the journal Cell, written by a team out of Duke University, may have provided us with some answers.

The researchers found that the most striking differences between the genomes of humans and those of chimps and bonobos lay in a set of switches they dubbed Human Ancestor Quickly-Evolved Regions (HAQERs -- pronounced, as you might have guessed, like "hackers").  HAQERs are genetic regulatory switches, that control when and how long other genes are active.  The HAQER sequences the team discovered seem to mostly affect two sets of developmental genes -- the ones that influence brain complexity and the ones involved in the production of the gastrointestinal tract.

"We see lots of regulatory elements that are turning on in these tissues," said Craig Lowe, who co-authored the paper, in an interview with Science Daily.  "These are the tissues where humans are refining which genes are expressed and at what level...  Today, our brains are larger than other apes, and our guts are shorter.  People have hypothesized that those two are even linked, because they are two really expensive metabolic tissues to have around.  I think what we're seeing is that there wasn't really one mutation that gave you a large brain and one mutation that really struck the gut, it was probably many of these small changes over time."
What's most interesting of all is that the HAQER sequences provide another example of how evolution is so frequently a trade-off.  Consider, for example, our upright posture; our vertebral column evolved in animals that walked on all fours, and when we switched to being bipedal it gave us the advantage of freeing up our hands and being able to see farther, but it bequeathed a legacy of lower back problems most other mammals never have to worry about.  Here, the HAQERs that seem to be responsible for our larger and more complex brains also correlate to a variety of disorder susceptibilities.  Particular variants of HAQER sequences are associated with a higher risk of hypertension, neuroblastoma, depression, bipolar disorder, and schizophrenia.
It's just the way genetic change works.  Sometimes you can't improve one thing without screwing something else up.  And if, on balance, the change improves survival and reproductive likelihood, it's still selected for despite the disadvantages.
So we seem to finally be making some inroads into the question of why such a tiny slice of our genome creates all the differences between ourselves and our nearest relatives.  It's worth a reminder, though, that we aren't substantially different than the other species we share the planet it.  It reminds me of the famous quote from Chief Seattle: "We did not weave the web of life, we are merely one strand in it.  Whatever we do to the web, we do to ourselves."
****************************************