The arms of the ancestors

My maternal grandmother was born Flora Meyer-Lévy, in the little town of Chackbay, Louisiana, in 1893.  I never knew her -- she died fourteen years before I was born, at the young age of 53 -- but I have photographs of her that show a striking woman with auburn hair and a serious expression (consistent with my mom's description of her mother as being a no-nonsense type). 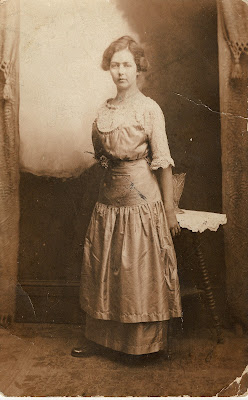 Flora's grandfather, Solomon Meyer-Lévy, was an Ashkenazi Jew, born in the village of Dauendorf, in Alsace.  He emigrated to the United States in the 1850s, only to get caught up in the Civil War -- he fought for a time on the Confederate side, and after the war came home and gave a go at raising horses.  He never made much of a success of it.  One of his grandchildren told me, somewhat euphemistically, that "he made bad deals while drunk."  Solomon, like his granddaughter, died young, at the age of 44.  His widow -- a French Creole woman named Florida Perilloux -- outlived him by over forty years.  She never remarried, and lived most of that time in poverty, converting their home into an inn just to make ends meet.
When I had my DNA tested a couple of years ago, I was fascinated to find that it detected my Ashkenazi great-great grandfather's contribution to my genetic makeup.  I am, the test said, about six percent Ashkenazi -- just about spot-on for having one Jewish ancestor four generations back.  I was surprised that my Jewish heritage was so clear; I didn't realize that Ashkenazi DNA is that distinct.
Apparently, the Ashkenazi have retained their genetic signature because of two factors -- being reproductively isolated and having experienced repeated bottlenecks.  The former, of course, is due to the taboo (on both sides) against Jews marrying non-Jews.  (My great-great grandparents are an interesting counterexample; he was a devout Jew, she was a devout Catholic, and neither one ever changed their religion.  They apparently lived together completely amicably despite their religious differences.  All seven of their children were raised Jewish -- and every single one converted to Catholicism to marry.  Evidently such tolerance was not the rule in nineteenth century Louisiana.)
The latter -- a genetic bottleneck -- refers to the situation when a population has its numbers reduced drastically, and the resurgent population all descends from the small group of survivors.  The bottlenecks in the European Jewish population, of course, were due largely to the repeated pogroms (massacres) that at times looked like eradicating the Jews from Europe entirely.  In fact, this is why the topic comes up today; a paper in Science that came out this week about a genetic investigation of the remains in a Jewish cemetery in Erfurt, Germany.  Many of the dead there were victims of a pogrom in March of 1349, and their teeth -- which contain intact DNA -- confirmed that the Ashkenazi were even then a genetically distinct population, descended from a small group of people who came originally from the Middle East or the Caucasus, and settled in central Europe some time around the year 1000 C.E.
Interestingly, the DNA from Erfurt was strikingly similar to DNA from a twelfth-century Jewish cemetery in Norwich, England, the subject of a paper only four months ago.  The geographical distance, apparently, was not enough to erase the distinct Ashkenazi signature.  "Whether they’re from Israel or New York, the Ashkenazi population today is homogenous genetically," said Hebrew University geneticist Shai Carmi.
Which explains how the DNA test was able to pick up my own ancestry.
It's fascinating to me that, on that one line at least, my family tree can trace its origins to a little group of migrants from the Near East who made their way to what is now eastern France, survived repeated attempts to eradicate them, and eventually produced a branch that went to Louisiana, ultimately leading to me here in upstate New York.  I can only hope I've inherited some of the dogged tenacity these people obviously had.

It's interesting, too, to look at the stern visage of the grandmother I never met, and to know a little more about her heritage.  Even though she, like all the generations before her, now rests in the arms of the ancestors, her genetic legacy lives on in me and her other descendants -- a handful of the "countless stars in the sky" that represent the lineage of Abraham.