The origins of Thule

There's a logical fallacy called appeal to authority, and it's trickier than it sounds at first.

Appeal to authority occurs when you state that a claim is correct solely because it was made by someone who has credentials, prestige, or fame.  Authorities are, of course, only human, and make mistakes just like the rest of us, so the difficulty lies in part with the word "solely."  If someone with "M.S., Ph.D." after their name makes a declaration, those letters alone aren't any kind of argument that what they've said is correct, unless they have some hard evidence to back them up.

There's a subtler piece of this, though, and it comes in two parts.  The first is that because scientific research has become increasingly technical, jargon-dense, and specialized, laypeople sometimes are simply unqualified to evaluate whether a claim within a field is justified.  If Kip Thorne, Lee Smolin, or Steven Weinberg were to tell me about some new discovery in theoretical physics, I would be in well over my head (despite my B.S. in physics) and ridiculously out of line to say, "No, that's not right."  At that point, I don't have much of a choice but to accept what they say for the time -- and hope that if it is incorrect, further research and the peer-review process will demonstrate that.  This isn't so much avoiding appeal to authority as it is accepting that bias as an inevitable outcome of my own incomplete knowledge.

The second problem is that sometimes, people who are experts in one field will make statements in another, cashing in on their fame and name recognition to give unwarranted credence to a claim they are unqualified to make.  A good, if disquieting, example of this is the famous molecular geneticist James Watson.  As the co-discoverer of both the double-helical structure of the DNA molecule and the genetic code, anything he had to say about genetic biochemistry should carry considerable gravitas.  On the other hand, he's moved on to making pronouncements about (for example) race that are nothing short of repellent -- including, "I am inherently gloomy about the prospect of Africa [because] all our social policies are based on the fact that their intelligence is the same as ours, whereas all the testing says not really."  Believing this statement "because James Watson said it, and he's a famous scientist" is appeal to authority at its worst.  In fact, he is wildly unqualified to make any such assessment, and the statement reveals little more than the fact that he's an asshole.  (In fact, in 2019 that statement and others like it, including ones reflecting blatant sexism, resulted in Watson being stripped of all his honorary titles by Cold Springs Harbor Laboratory.)

My point here is that appeal to authority is sometimes difficult to pin down, which is why we have to rely on knowledgeable people policing each other.  Which brings us to philologist Andrew Charles Breeze.

Breeze has been a professor of philology at the University of Navarra for thirty-five years, and is a noted scholar of the classics.  His knowledge of Celtic languages, especially as used in ancient Celtic literature, is superb.  But he's also, unfortunately, known for his adherence to hypotheses based on evidence that is slim at best.  One example is his claim that the beautiful Welsh legend cycle The Mabinogion was written by a woman, Gwenllian ferch Gruffydd, daughter of Gruffydd ap Cynan, Prince of Gwynedd.  This claim has proven controversial to say the least.  He also has championed the idea that King Arthur et al. lived, fought, and died in Strathclyde rather than in southwestern England, a claim that has been roundly scoffed at.  Even Arthur's existence is questionable, given that his earliest mention in extant literature is Nennius's Historia Brittonum, which was written in 830 C.E., four hundred years after Arthur was allegedly King of the Britons.  As far as where he lived -- well, it seems to me that establishing if he lived is the first order of business.

But even making the rather hefty assumption that the accounts of Nennius are true, we still have a problem with Breeze's claim.  Arthur's enemies the Saxons didn't really make any serious incursions into Strathclyde until the early seventh century, so an Arthur in Strathclyde would be in the position of fighting the Battle of Badon Hill against an enemy who wasn't there at the time.

Anyhow, my point is that Breeze kind of has a reputation for putting himself out on the edge.  Nothing wrong with that; that's why we have peer review.  But I also have to wonder about people who keep making claims with flimsy evidence.  You'd think they'd become at least a little more cautious.

Why this comes up is that Breeze just made yet another claim, and this one is on a topic about which I'm honestly qualified to comment in more detail.  It has to do with the origin of the word "Thule."  You probably know that Thule is the name given in classical Greek and Roman literature to the "most northern place."  It was written in Greek as Θούλη, and has been identified variously as the Faeroe Islands, the Shetland Islands, northern Scotland, Greenland, Iceland, Norway, Finnish Lapland, an "area north of Scythia," the island of Saaremaa (off the coast of Estonia), and about a dozen other places.  The problem is -- well, one of many problems is -- there's no archaeological or linguistic evidence that the Greeks ever went to any of those places.  In the absence of hard evidence, you could claim that Thule was on Mars and your statement would carry equivalent weight.

Another difficulty is that even in classical times, the first source material mentioning Thule, written by Pytheas of Massalia, was looked at with a dubious eye.  The historian Polybius, writing only a century and a half after Pytheas's time, scathingly commented, "Pytheas... has led many people into error by saying that he traversed the whole of Britain on foot, giving the island a circumference of forty thousand stadia, and telling us also about Thule, those regions in which there was no longer any proper land nor sea nor air, but a sort of mixture of all three of the consistency of a jellyfish in which one can neither walk nor sail, holding everything together, so to speak."

Well, Breeze begs to differ.  In a recent paper, he said that (1) Thule is for sure Iceland, and (2) the Greeks (specifically Pytheas and his pals) got to Iceland first, preceding the Vikings by a thousand years. 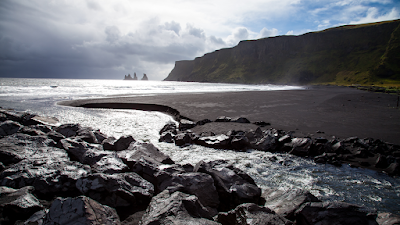 Bold claim, but there are a number of problems with it.

First, he seems to be making this claim based on one thing -- that the Greek word for Thule (Θούλη) is similar to the Greek word for altar (θῠμέλη), and that the whole thing was a transcription error in which the vowel was changed (ού substituted for ῠ) and the middle syllable (μέ) dropped.  Well, this is exactly the kind of thing I specialized in during my graduate studies, and I can say unequivocally that's not how historical linguistics works.  You can'd just jigger around syllables in a couple of words and say "now they're the same, q.e.d."

He says his idea is supported by the fact that from the sea, the southern coast of Iceland looks kind of like an altar:

The term Thymele may have arisen from the orographic features of the south of the island, with high cliffs of volcanic rock, similar to that of Greek temple altars.  Probably, when Pytheas and his men sighted Iceland, with abundant fog, and perhaps with columns of smoke and ashes from volcanoes like Hekla, he thought of the altar of a temple.

This is what one of my professors used to call "waving your hands around in the hopes of distracting the audience into thinking you have evidence."  Also, the geologists have found evidence of only one major eruption in Iceland during Pytheas's lifetime -- the Mývatn eruption in around 300 B.C.E. -- and it occurred in the north part of Iceland, over three hundred kilometers from the southern coast of the island.

Another thing that makes me raise an eyebrow is where the paper is published -- the Housman Society Journal, which is devoted to the study of the works of British classicist and poet A. E. Housman.  If Breeze's claim was all that and a bag of crisps, why hasn't it been published in a peer-reviewed journal devoted to historical linguistics?

Third, there's another classical reference to Thule that puts Breeze's claim on even thinner ice, which is from Strabo's Geographica, and states that when Pytheas got to Thule, he found it already thickly inhabited.  There is zero evidence that Iceland had any inhabitants prior to the Vikings -- it may be that the Inuit had summer camps in coastal western Iceland, but that is pure speculation without any hard evidential support.  The earliest Norse writings about Iceland describe it as "a barren and empty land, devoid of people."  Despite all this, Strabo writes:

The people [of Thule] live on millet and other herbs, and on fruits and roots; and where there are grain and honey, the people get their beverage, also, from them.  As for the grain, he says, since they have no pure sunshine, they pound it out in large storehouses, after first gathering in the ears thither; for the threshing floors become useless because of this lack of sunshine and because of the rains.

I can say from experience that establishing linguistic evidence for contact between two cultures is difficult, requires rigorous evidence, and can easily be confounded by chance similarities between words.  My own work, which involved trying to figure out the extent to which Old Norse infiltrated regional dialects of Old English and Archaic Gaelic, was no easy task (and was made even more difficult by the fact that two of the languages, Old Norse and Old English, share relatively recent a common root language -- Proto-Germanic -- so if you see similarities, are they due to borrowing or parallel descent?  Sometimes it's mighty hard to tell).

I'm not in academia and I'm in no position to write a formal refutation of Breeze's claim, but I sure as hell hope someone does.  Historical linguistics is not some kind of bastard child of free association and the game of Telephone.  I've no doubt that Breeze's expertise in the realm of ancient Celtic literature is far greater than mine -- but maybe he should stick to that subject.