The skein of lies

The only thing that is surprising about Representative-elect George Santos's tangled skein of lies is how unsurprising it is.

The list of his falsehoods is extensive, and include:

And so on and so forth.  Confronted with the list of falsehoods, he called them "embellishments" and "poor choices of words," instead of what they are, which are brazen, bald-faced lies. 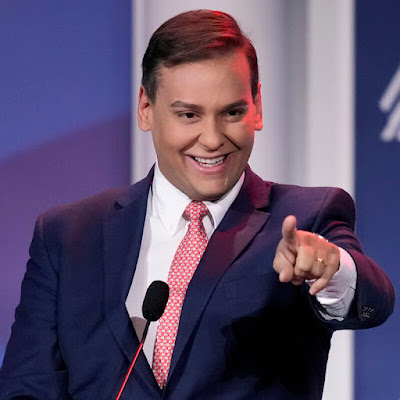 All appalling enough.  But what finally pissed me off enough to write about it here was an interview two days ago on Fox News, where Tulsi Gabbard (sitting in for Tucker Carlson) had some sharp words for Santos, calling him out on his lies and saying, "Have you no shame?" and "You don't seem to be taking this seriously."

Okay, whoa now.  Fox News has zero standing to call out Santos for lying.  They stood by and defended Donald Trump for lying pretty much every time he opened his damn mouth, and still largely support him (and attack anyone who opposes him).  They sided with Trump counselor Kellyanne Conway when she defended then-White House spokesperson Sean Spicer's lies about the number of attendees at the Inauguration, calling them "alternative facts."  They've been at the forefront of spreading lies and propaganda about climate change (it's a hoax), COVID-19 (it's no big deal), masks (they don't work), and vaccines (neither do they).

They do not get to stand on the moral high ground now and pretend they care about the truth.

In a very real sense, Fox News created George Santos.  Without the complete disdain they've shown for truth, without their "facts you don't like are lies by the radical left" philosophy, without the constant message of "every media agency in the world is lying to you except us," the network of easily-disproved falsehoods by George Santos wouldn't have lasted five minutes.  Members of his own party would have found out what a fraud he is, and fronted another candidate for the position.

But we're sunk so deep in the attitude that "truth doesn't matter as long as you're in power," he not only ran, but got elected.

It remains to be seen what will happen to him.  A House ethics committee is looking into his background, but whether his past actions crossed the line from "unethical" into "illegal" isn't certain.  It's probable that since in a week the House of Representatives will have a Republican majority, he'll sail into office without a problem.

Honestly, if you think Santos is shocking, you haven't been paying attention.  He's just the end of a long pattern of increasing disdain for inconvenient truths.  We haven't seen the last of his kind, either, especially given the likelihood that he won't face anything worse for his lying than a slap on the wrist.  Until we, as a voting citizenry, demand that our elected officials and the media we consume respect the truth above all, we will continue living out the famous quote by Jean de Maistre, that "A democracy is the form of government in which everyone has a voice, and therefore in which the people get exactly the leadership they deserve."