The strange case of Frederick Valentich

As skeptics, sometimes we have to admit that there are cases when we don't know the answer to a question -- and may not ever know.
It's not that it isn't frustrating.  Believe me, I get that.  One such question that is near and dear to my heart is whether or not there is intelligent extraterrestrial life.  While speculation runs rampant -- and I've done my own share of speculating -- the fact is, we have exactly zero evidence for it.  There are equally persuasive arguments for intelligent aliens being widespread and for humanity being, for all intents and purposes, alone in the universe.  It's very hard to derive a meaningful conclusion from the absence of data coupled with a huge and largely unexplored search field, so right now -- however much we'd like to meet the Vulcans and whatnot -- the most honest answer is "we don't know."
The same can happen with much less grandiose realms of inquiry.  Which brings me to a mystery I stumbled on a couple of days ago -- the puzzle of what happened to Frederick Valentich on October 21, 1978.
Valentich was a twenty-year-old Australian man who dreamed of a career in aviation, but a poor track record with academics and some rather erratic behavior kept getting in the way.  He applied twice to the Royal Australian Air Force, and was rejected both times because of "inadequate educational qualifications."  He successfully joined the RAAF Air Training Corps, and did part-time study to try for his commercial pilot's license -- but failed the qualifying examinations in all five subjects, not once but twice.  He got a license to fly small aircraft, but didn't even do well at that, straying into controlled air space over Sydney once, and then twice deliberately flying into a cloud (his license was only rated to allow him to fly in "visual meteorological conditions") -- behavior that was on the verge of grounding him permanently.
None of this discouraged him. 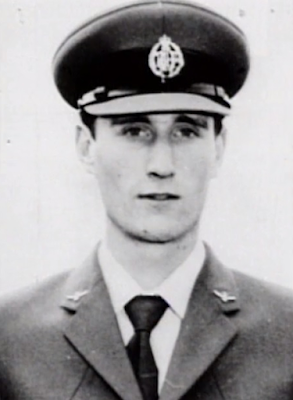 Frederick Valentich shortly before his disappearance [Image is in the Public Domain]
On the afternoon of October 21, 1978, Valentich took off from Melbourne Airport in a Cessna 182L heading toward King Island, about halfway between the southern coast of Australia and the northern tip of Tasmania.  His purpose is unknown; he told a friend he was going to meet some friends, and another that he was picking up a parcel of seafood, but neither turned out to be true.  At 7:06 PM he radioed Melbourne Air Traffic Control that he was flying at 1,400 meters and was being followed by a "large aircraft with four bright landing lights."  It kept getting closer and then moving away, he said.
Melbourne asked Valentich for more information.  He said that he was having engine problems, but the aircraft was still following him.  Then there was a silence, followed by Valentich saying, "It's not an aircraft."
Those were his last words.  They were followed by what are described as "metallic scraping noises," then... nothing.
A search commenced the next day, and over four days covered over a thousand square kilometers.  Neither Valentich nor any confirmable trace of his airplane were ever found.
A variety of explanations have been suggested to account for Valentich's disappearance.  These include:
It's a curious case, to say the least, made more curious by the aforementioned fact that he'd lied about his reason for heading toward King Island, and also that according to his father, Valentich was obsessed with UFOs and had expressed fear about being abducted.  Then, there's the following account, as related in Strange Skies: Pilot Encounters with UFOs, by Jerome Clark:

Several years after the incident, several members of a family -- an uncle, his son, and two nieces -- came forward to relate an experience they underwent on October 21, 1978.  As the story went, they were hunting rabbits on Cape Otway when one of the girls asked, "What is that light?"  Looking up, the uncle spotted an airplane (apparently Valentich's, the only one that would have been in the air at the time in question) and identified it as an aircraft light.  "No," the niece insisted.  "The light is above the airplane."  The four watched the plane and the light until it disappeared behind some nearby hills.

So what are we to make of all this?
Honestly, there's not much here to make.  Once again, we are faced with a complete absence of hard evidence.  Other than the conversation between Valentich and Melbourne Air Traffic Control, we've got nothing to go on other than anecdote.  Each of the above explanations is possible (even, loath though I am to admit it, the alien abduction one).  Certainly each one admits to arguments against.  It's likely that his plane went down in Bass Strait due to pilot error, but likely doesn't mean case closed.
So the rather unsatisfying conclusion is that we don't know what happened to Frederick Valentich, and probably never will.
When faced with a situation like this, the best we can do is hold our opinion in abeyance, forever if need be.  I get that it's frustrating; the human mind's drive to know stuff is mighty powerful.  But as good skeptics we need to admit it when the evidence is simply inadequate to draw a conclusion, any conclusion.
And it seems like, in the strange case of Frederick Valentich, we might never have a better answer than that.
****************************************