I don't always need to understand things to appreciate them.

In fact, there's a part of me that likes having my mind blown.  I find it reassuring that the universe is way bigger and more complex than I am, and the fact that I actually can parse a bit of it with my little tiny mind is astonishing and cool.  How could it possibly be surprising that there's so much more out there than the fragment of it I can comprehend?

This explains my love for twisty, complicated fiction, in which you're not handed all the answers and everything doesn't get wrapped up with a neat bow at the end.  It's why I thoroughly enjoyed the last season of Doctor Who, the six-part story arc called "Flux."  Apparently it pissed a lot of fans off because it had a quirky, complicated plot that left a bunch of loose ends, but I loved that.  (I'm also kind of in love with Jodie Whittaker's Thirteenth Doctor, but that's another matter.) 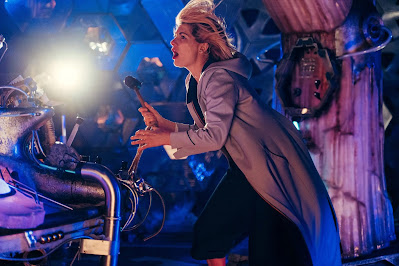 I don't feel like I need all the answers.  I'm not only fine with having to piece together what exactly happened to whom, but I'm okay that sometimes I don't know.  You just have to accept that even with all the information right there in front of you, it's still not enough to figure everything out.

Because, after all, that's how the universe itself is.

[Nota bene: Please don't @ me about how much you hated Flux, or how I'm crediting Doctor Who showrunner Chris Chibnall with way too much cleverness by comparing his work to the very nature of the universe.  For one thing, you're not going to change my mind.  For another, I can't be arsed to argue about a matter of taste.  Thanks.]

In any case, back to actual science.  That sense of reality being so weird and complicated that it's beyond my grasp is why I keep coming back to the topic of quantum physics.  It is so bizarrely counterintuitive that a lot of laypeople hear about it, scoff, and say, "Okay, that can't be real."  The problem with the scoffers is that although sometimes we're not even sure what the predictions of quantum mechanics mean, they are superbly accurate.  It's one of the most thoroughly tested scientific models in existence, and it has passed every test.  There are measurements made using the quantum model that have been demonstrated to align with the predictions to the tenth decimal place.

That's a level of accuracy you find almost nowhere else in science.

The reason all this wild stuff comes up is because of a pair of papers (both still in peer review) that claim to have demonstrated something damn near incomprehensible -- the researchers say they have successfully split a photon and then triggered half of it to move backwards in time.

One of the biggest mysteries in physics is the question of the "arrow of time," a conundrum about which I wrote in some detail earlier this year.  The gist of the problem -- and I refer you to the post I linked if you want more information -- is that the vast majority of the equations of physics are time-reversible.  They work equally well backwards and forwards.  A simple example is that if you drop a ball with zero initial velocity, it will reach a speed of 9.8 meters per second after one second; if you toss a ball upward with an initial velocity of 9.8 meters per second, after one second it will have decelerated to a velocity of zero.  If you had a film clip of the two trajectories, the first one would look exactly like the second one running backwards, and vice versa; the physics works the same forwards as in reverse.

The question, then, is why is this so different from our experience?  We remember the past and don't know the future.  The physicists tell us that time is reversible, but it sure as hell seems irreversible to us.  If you see a ball falling, you don't think, "Hey, you know, that could be a ball thrown upward with time running backwards."  (Well, I do sometimes, but most people don't.)  The whole thing bothered Einstein no end.  "The distinction between past, present, and future," he said, "is only an illusion, albeit a stubbornly persistent one."

This skew between our day-to-day experience and what the equations of physics describe is why the recent papers are so fascinating.  What the researchers did was to take a photon, split it, and allow the two halves to travel through a crystal.  During its travels, one half had its polarity reversed.  When the two pieces were recombined, it produced an interference pattern -- a pattern of light and dark stripes -- only possible, the physicists say, if the reversed-polarity photon had actually been traveling backwards in time as it traveled forwards in space.

In the macroscopic world, time is intrinsically asymmetric, flowing in a specific direction, from past to future.  However, the same is not necessarily true for quantum systems, as some quantum processes produce valid quantum evolutions under time reversal.  Supposing that such processes can be probed in both time directions, we can also consider quantum processes probed in a coherent superposition of forwards and backwards time directions.  This yields a broader class of quantum processes than the ones considered so far in the literature, including those with indefinite causal order.  In this work, we demonstrate for the first time an operation belonging to this new class: the quantum time flip.

This takes wibbly-wobbly-timey-wimey to a whole new level. 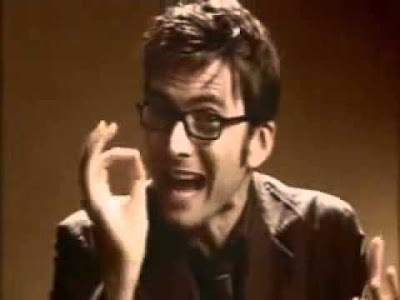 Do I really understand what happened here on a technical level?  Hell no.  But whatever it is, it's cool.  It shows us that our intuition about how things work is wildly and fundamentally incomplete.  And I, for one, love that.  It's amazing that not only are there things out there in the universe that are bafflingly weird, we're actually making some inroads into figuring them out.
To quote the eminent physicist Richard Feynman, "I can live with doubt and uncertainty and not knowing.  I think it's much more interesting to live not knowing than to have answers which might be wrong.  I have approximate answers and possible beliefs and different degrees of certainty about different things, but I'm not absolutely sure about anything."
To which I can only say: precisely.  (Thanks to the wonderful Facebook pages Thinking is Power and Mensa Saskatchewan for throwing this quote my way -- if you're on Facebook, you should immediately follow them.  They post amazing stuff like this every day.)

I'm afraid I am, and will always be, a dilettante.  There are only a handful of subjects about which I feel any degree of confidence in my depth of comprehension.  But that's okay.  I make up for my lack of specialization by being eternally inquisitive, and honestly, I think that's more fun anyhow.

Three hundreds years ago, we didn't know atoms existed.  It was only in the early twentieth century that we figured out their structure, and that they aren't the little solid unbreakable spheres we thought they were.  (That concept is still locked into the word "atom" -- it comes from a Greek word meaning "can't be cut.")  Since then, we've delved deeper and deeper into the weird world of the very small, and what we're finding boggles the mind.  My intuition is that if you think it's gotten as strange as it can get, you haven't seen nothin' yet.