Even if we're just dining in the dark

Last night, Carol and I participated in an event called "Dark Dining."  The sixty participants were blindfolded, and then led in groups into a dining room, seated, and served a five-course meal.  At no time were we allowed to remove our blindfolds, and in fact at the conclusion we were led out of the room in groups back to the room where we started -- never to see the place where we ate dinner (unless at some time in the future, we cheat and go back there).

The whole idea was to heighten our sensory experience by depriving us of one of our senses, the one that in fact we require the least in order to enjoy a good meal.  You might think that it would have been a messy affair, but to my knowledge there was not a single spill the whole evening.  We did look kind of silly,  however, to judge by a photograph taken by one of the wait staff: 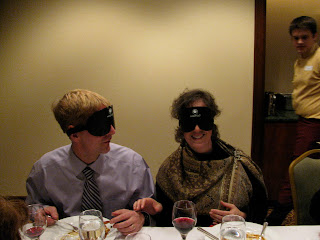 Some of my impressions:

1)  The thing I found the most disorienting was not having any idea of the physical space I was in.  My sense of hearing is quite good and by the middle of the evening I was fairly certain that we were in a long, narrow room, but it was a very weird feeling not having any real sense of where I was, or where I was in relation to the objects and other people in the room.  I did figure out that I was at the end of the table -- I suspected it fairly quickly by the pattern of sounds, but I didn't want to reach out my hand to find out and gut punch someone.

2)  My sense of taste is really quite inaccurate.  The big shocker of the night was dessert, which took me several bites to identify as chocolate.  My first sense was that it was something a little sweet and a little bitter, but I believe that one of my neighbors said "chocolate" before I had decided that was what it was.  This makes me wonder to what extent the visual sense does contribute to your sense of taste, priming the brain for what it will be experiencing.

3)  It's almost impossible to turn off the brain's determination to create visual images.  Terry and Kornelia, our dining companions across the table, were complete strangers to us, and Carol and I both found ourselves creating strong visual impressions of them despite having exactly zero hard evidence to go on.  Need I add that neither of our mental images were even close?

4)  It's really, really difficult to eat pot roast when you can't see what you're doing.  The best technique is to spear a big piece and gnaw, caveman-style, chunks off of it.  I figured, "what the hell, no one can see me but the wait staff, and they're probably used to this sort of thing."

5)  My wife has a warped sense of humor.  At several points, we were supposed to stop talking and listen to some music, and during that time the wait staff would do things like brush a hand across our shoulders, fan us with something, or walk around clinking glasses -- all to make us more aware of our other senses.  So the next time the music played, Carol touched the back of my neck, and I thought, "ah, the wait staff is up to their tricks again."  Then she stuck her finger in my ear.  I have to admit, her aim was impeccable.  Either that, or I have big ears.

All of this put my in mind of the Ganzfeld Experiments, done in the 1930s by psychologist Wolfgang Metzger.  He had his subjects blindfolded and placed in sensory deprivation, or (in one variation) staring at a field of uniform color (the "ganzfeld," German for "complete field," of the name).  In all cases, subjects reported heightened awareness, their electroencephalogram outputs changed, and some subjects hallucinated.  (One wonders if those subjects thought a finger was being put into their ears.)  The Ganzfeld Experiments were extended in the late 1970s by Dean Radin and Daryl Bem, who reported that subjects in sensory deprivation were capable of telepathy -- a finding that has been called seriously into question by skeptics, but remains an intriguing claim of what is supposedly "the strongest quantifiable evidence of telepathy to date."

Be that as it may, it was a fascinating evening, and one which forced me to slow down (physically and mentally) and really focus on what I was experiencing.  And the food and wine was delicious.  If you're interested in finding out more, or seeing if there's a dark dining experience near you, here's a link to the Dark Dining Project.  Give it a try -- it'll be an unforgettable evening.
Posted by Gordon Bonnet at 2:35 AM