In the third of our series on Giving Woo-Woo Explanations For Every Damn Thing You See, we have:  chance resemblances proving that famous people are actually Evil Undead Creatures of the Night.

I was looking through the news yesterday, and I came across the story of a Civil War era photograph from Tennessee being offered at auction.  What's unusual about it is that the owner is hoping someone will pay a million dollars for it.  By now, you're probably pretty curious about it, so without further ado, here's the photograph: 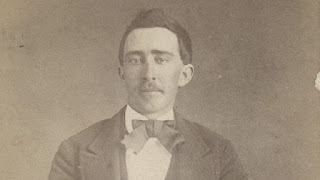 But that's not what the owner claims.  The owner claims that it is Nicolas Cage.  Here's the advertisement for the item in the auction:


Original c.1870 carte de visite showing a man who looks exactly like Nick Cage. Personally, I believe it's him and that he is some sort of walking undead / vampire, et cetera, who quickens / reinvents himself once every 75 years or so.  150 years from now, he might be a politician, the leader of a cult, or a talk show host.  This is not a trick photo of any kind and has not been manipulated in Photoshop or any other graphics program.

Oh, okay.  That makes sense.  Nicolas Cage is lying about having been born in California in 1964.  All of this stuff about his being the nephew of Francis Ford Coppola is also a lie.  Childhood photographs that you find on his fan site?  They're of some other kid.  It makes far more sense that he is an immortal vampire who lived in Tennessee during the Civil War.

*brief pause to pound my head on the desk*

Of course, this isn't the first time this sort of thing has been claimed.  You may not know it, but Keanu Reeves is also one of the undead, and I'm not referring to the fact that he only seems to be capable of a single facial expression: 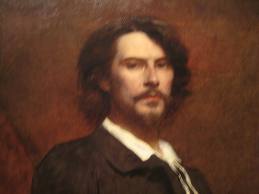 Yes, folks, this painting by the 19th century French painter Louis-Maurice Boutet de Monvel is actually of the star of The Matrix.  You'd think it would be hard to persuade an evil immortal vampire to sit still long enough to have his portrait painted.  Oh, well, I guess if you're The One, you can do whatever the hell you want.

Then, there's the claim that Shia LaBeouf is an immortal, shapeshifting clone (see the YouTube video here).  I think this one may be a joke, but honestly, who can tell?  As far as I can see the Nicolas Cage and Keanu Reeves claims are dead serious, so by comparison, the LaBeouf thing is maybe one notch more ridiculous, and still not as generally stupid as (for example) the claim made earlier this year that Han Solo had crashed the Millennium Falcon into the Baltic Sea, where it was later found by some intrepid Swedish treasure hunters.

The whole thing kind of makes me crazy, mostly because I feel sure that today I'll have at least one student ask me today, "Did you hear that they found a photograph of Nicolas Cage from the Civil War?" causing various other students to say, "Dude, that's amazing," or words to that effect, and I'm going to have to exert a heroic effort not to say something extremely snarky.
Posted by Gordon Bonnet at 2:50 AM