Our Lady of the Holy Television Screen

My friend Mark was working on a home improvement project, and generating a great quantity of dust.  After working for some hours, he went into his living room, and found the following eerie image in the dust patterns on the screen of his television: 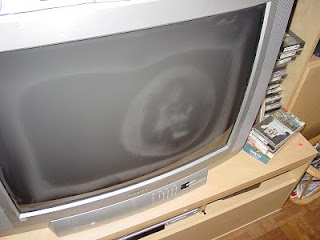 The bit of the image in the lower right-hand corner looked, to Mark's eye, like a woman holding a baby, and he immediately thought, "Hey, look!  It's Mary and Jesus!"  And, of course, he had to send the image to me.

Fortunately, however, Mark is also an electrical engineer, and knew what had happened.  While he was working on his project, his kids had been watching television, and had paused the DVD they were watching for a long time.  The cathode-ray tube in the television, bombarding the screen with positively-charged particles to create the same image for ten minutes or so, had left a residual pattern in the dust that had adhered to the screen.  All he was seeing was the ghostly afterimage of the last bit of the film his kids had been watching before they turned the DVD player off.

Of course, not everyone looks for such explanations.  Some people don't even seem to want to look for them.  Take Bishop David Ricken, of the Roman Catholic diocese of Green Bay, Wisconsin.

Bishop Ricken was one of a group of Catholic theologians who investigated the site of an alleged miracle -- a chapel in Champion, Wisconsin, where in 1859 a Belgian immigrant named Adele Brise supposedly saw an apparition of the Virgin Mary.  The chapel, and Brise's nearby grave, have become a mecca for believers, who think that their being at the site of the miracle will somehow heal disease.

But it's not the beliefs of the devout pilgrims I want to look at here; it's the actions of Bishop Ricken and his group, who after an inquiry into the claim decided that it was true, and certified the chapel as the site of a miracle.

And my question is: how on earth would you certify that a miracle had occurred over 150 years ago?  Brise herself is long dead; anyone who knew Brise is also long dead.  All we have are written records of her story.  How can that constitute evidence, even in the least scientific definition of the word?

Interestingly, an article at Catholic.org describing the claim (read the whole thing here) states that Brise's claim is the only "validated" appearance of the Virgin Mary in the United States; two others supposed visitations, at Necedah, Wisconsin and Bayside, New York, were investigated by the church and "found to be false."  How, pray tell, do you tell a false claim of something for which you have only anecdotal evidence from a true one?

In any case, the apparition Brise claims she saw -- of a shining woman in white who told Brise to "gather the children in this wild country, and teach them what they need for salvation" -- led her to become a Franciscan nun, and later to found a Catholic school.  So it's pretty clear that Brise herself thought she'd seen Mary, if her later actions are any indication.

But lots of people do lots of things for specious reasons, or no particular reason at all -- there's no way now, even if you believe in the basic tenets of the Catholic religion, to verify her claim based on any reasonable criteria for certainty.  This didn't stop Ricken, of course, and nor does it seem to dissuade the hundreds of pilgrims who go to the Shrine of Our Lady of Good Help to search for healing.

It's all too easy to fool the human brain -- given the deep-seated need by the devout to see the object of their worship, coupled with the lengths this sometimes drives them to -- self-imposed sleep deprivation, fasting, and other forms of denial of bodily needs -- it does not take much of a stretch to attribute such visions to hallucination.  And just as in the case of Mark's apparition of Mary and Jesus on his television screen, the natural explanation certainly is a more plausible version of what happened, however Ricken and his trio of theologian friends think they can certify the veracity of a claim from 150 years ago for which there is no tangible evidence whatsoever.
Posted by Gordon Bonnet at 2:47 AM