So, today's the first day of school here in upstate New York, and I'm sure there are thousands of nervous boys and girls who are on the verge of being awakened by parents, siblings, or alarm clocks, and getting themselves ready for the start of another school year.  And lots of little ghostly children are stretching and yawning (well, I assume that ghosts stretch and yawn, but I have no empirical data on that) and preparing for another nine months of haunting, before the school is again empty and the ghosts have to find other occupations than scaring the living.

Every school I've worked in has, according to the students, been haunted.  My current school supposedly had a haunted gym, and for years I was periodically regaled by students with accounts of being alone in the locker room and "hearing noises" and "seeing shadowy shapes."  This usually resulted in my initiating a discussion of the phrase "tangible evidence," making suggestions for other possible explanations for noises and shadows, and describing the principle of Ockham's Razor.  The stories have kind of tapered off, however, since a renovation project a few years ago turned what was the gym into the cafeteria, and a new, larger gym was built on what was bare ground.  Since that time I haven't heard any more about ghosts.  Maybe even ghostly kids are repelled by cafeteria food, I dunno.

We're apparently not the only ones who have enrollment from the ranks of the spirit world, however.  A Frankfort, Kentucky school for the disabled is supposedly haunted by the spirit of a kid who was killed in a bus accident.  A worker in the school, identified only as "Belinda," relates that custodians heard the sound of footsteps in empty halls at night, and students heard noises from inside lockers, and heard their names called when no one was there.  "Belinda" herself was discussing the haunting in the cafeteria with another staff member, and a pot on an overhead rack "came up off the spoke and flew clear across the room!"  However, as we have only "Belinda's" word for this, I'm thinking this one carries about as much weight as my former students' "shadows and noises."

Apparently, you can have all kinds of ghosts at schools.  "Deb" from a town in the hill country of Australia describes barbequing hamburgers for some eight-year-old students of hers who were staying at the school for a sleepover, when "a little dog - a Jack Russell terrier - popped out of the wall!"  The ghostly dog "ran around barking" and ran "through a wall into the Tech Studies room."  Deb, whose nerves we should all admire, went into the Tech Studies room, and lo, there was the dog, standing on his hind legs, barking at a "glowing green orb."  Finally, both dog and orb "floated away into the sky."

I bet by then the hamburgers were reduced to disc-shaped charcoal briquets, but who can blame her?

Lastly, we have a photograph taken by one Margaret Cowart, when she visited the oldest wooden schoolhouse in the United States, situated in St. Augustine, Florida, that seems to show the face of a rather severe looking schoolteacher (see inset on upper right): 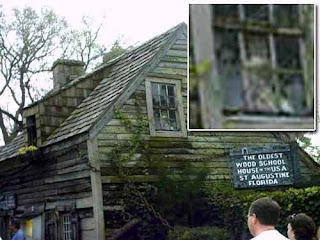 I'm hoping that no one expects me to continue going to school after I'm dead.  My feeling is, I spend enough time in my classroom as it is - once I'm dead, I'd like to visit a few more interesting places.  I could totally get into haunting, say, a beach in Costa Rica.  Why a schoolteacher would stick around in a musty old building not only after retirement but after death, especially one that isn't even a working school any more, just to glare menacingly out of windows at passersby, is beyond me.

In any case, if any of my readers are students, allow me to wish you a pleasant and productive school year, free of ghostly footsteps, flying cookware, floating dogs, glowing orbs, and glowering teachers (dead or alive).

An equal wish of goodwill goes out to all you teachers and school staff members out there.  May all of your problems this year be no worse than mildly unruly, but still living, students, and no Jack Russell terriers of either sort, dead or alive.  We have to maintain some classroom decorum, here.
Posted by Gordon Bonnet at 2:46 AM