The ghost in the window

One of the difficulties of being a skeptic interested in claims of the paranormal is to determine what is meant by "credible evidence."

Today and tomorrow we'll take two of the most common paranormal claims -- ghosts and UFOs -- and consider what it would take to turn someone like me into a believer.  Then we'll look at one (of each), representative recent claims of a ghost and a UFO respectively, and see if they meet some kind of baseline of evidential support.

Aficionados of hauntings usually have a variety of arguments in favor of the existence of ghosts.  An experience of seeing the spirits of the dead, they say, is ubiquitous.  Just about every culture on Earth has a tradition of an afterlife, and virtually all of them describe the experience of meeting a relic of the dead.  Anecdotal accounts probably number in the millions.  Ghostly photographs, of course, are also common, and some are undeniably creepy (whatever you can say about their authenticity).  Newer, higher tech methods are cropping up, including the use of electromagnetic field sensors and sensitive audio equipment, and modern ghosthunters claim that both of these tools have yielded positive results.

Okay, now for the skepticism.  Just about every culture on Earth has a tradition of a deity, and even if you accept that some conception of god is right, they can't all be right because their gods differ wildly from each other.  So even accepting, for the sake of argument, that some sort of god exists, 99% of cultures on Earth got the majority of his/her/its attributes wrong.  Simple ubiquity as an argument for a belief is mildly suggestive, nothing more.  As far as photographs, they are becoming increasingly easy to fake (which doesn't mean that they all are fakes, but simply that it might be difficult to tell the fakes from any out there that are real).  And you have to wonder if the claims that new equipment picking up EMF and suspicious sounds aren't mistaking correlation for causation -- perhaps EMF or peculiar sounds exist in a place because of some purely natural phenomenon, and those are then interpreted by us as evidence for a ghostly presence.  (This last statement is pure speculation, of course, but you might want to recall the famous case of a low-frequency standing sound wave in a building causing an illusion of ghosts -- read about it here.)  In order to convince me, I'd have to see a ghost myself, under conditions that precluded the possibility of trickery, or else have some sort of experiment done, with an adequate set of controls, that showed hard data indicating the presence of some sort of "ghostly energy" (a frequent claim by ghosthunters).

Now for the case study.

A derelict Victorian guesthouse in Kendal, Cumbria, England was scheduled for demolition a couple of weeks ago, and the demolition supervisor took some photographs of it for his company's records.  After having the photographs printed, he noticed something pretty peculiar in one of them: 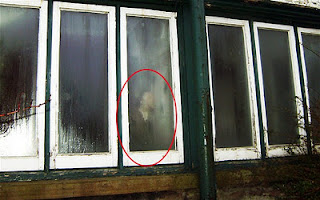 Let's look at a closeup:

Okay.  So, what is it?  Well, apparently the demolition supervisor, who is named David Armstrong, was pretty creeped out when he saw this.  In Armstrong's words, "There was only a black wall behind the window, we had taken everything out – there were no visible features or anything with a skin color."  Couple this with the claim of one of Armstrong's workmen, Stuart Shan, that the place is haunted:  "The day before we took the photo we were stripping the building inside and I noticed the chandelier swinging on its own.  We said at the time the place felt strange.  My hairs were standing on end when I saw the photo.  I believe it is a ghost."

Given all of the scary stuff happening, Armstrong brought the story (and the photograph) to the attention of the property owner, David Grimshaw.  And Grimshaw took one look at the photograph -- and said that the figure was clearly that of of his deceased mother, Frances Grimshaw, who used to "stand looking out of that very window, and wore large earrings and a bow on her dress just like the figure in the window."

So, what do we have here?  I have to admit that the photograph is pretty odd, whether or not it actually is depicting an old lady's ghost.  Let's, for the moment at least, admit it into evidence.  What about Shan's story of a swinging chandelier?  Well, you'll note from his statement that he made his claim after seeing the photograph, so you have to be at least a little skeptical at this point, wondering if perhaps he wasn't adding a story of a ghostly presence pushing the chandelier to bolster his boss' claim that the photograph was of ghostly provenance (or, possibly, to get in on the publicity that was sure to come -- which worked, didn't it?).

Then, we have the claim by David Grimshaw that the figure looked "just like his mother."  Well, one of the sources I used actually had a photograph of the late Mrs. Grimshaw, so let's take a look: 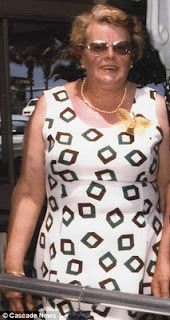 Well, the first thing that strikes me is that the figure in the window looks nothing like Mrs. Grimshaw.  The figure in the window has what looks like brown hair, possibly pulled back into a bun, and a high forehead, and seems to me to be on the skinny side.  Then we have blonde, curly-haired, stocky Mrs. Grimshaw.  Any resemblance between the two certainly escapes me.

Well, perhaps the figure isn't Mrs. Grimshaw, but could it still be a ghost?  Myself, I just can't take a single photograph, however creepy, and turn it into evidence for an afterlife.  Because, honestly, that's all we have.  Meaning no disrespect to Mr. Shan's reputation, but corroborating the photographic evidence after the fact with a story of the chandelier swinging really doesn't meet what I would consider the minimum standards of reliable evidence.

As far as the photograph, there is just too much chance of fakery, or (failing that) our old friend pareidolia (the tendency of humans to see faces in random patterns of color, light, and shadow) to put too much weight on it as evidence.  So with the Kendal haunting, we're right back where we started; weakly suggestive evidence that really doesn't provide what a true skeptic would consider convincing.

Again, to reiterate: that doesn't mean that ghosts don't exist.  All it means is that the jury's still out.  As befits a true skeptic, we don't have to decide now -- the jury can remain out forever, until we have enough in the way of hard evidence to make a judgment.

Tomorrow:  a UFO collides with a bird?
Posted by Gordon Bonnet at 3:04 AM