New from the "You Can't Win With These People" department, we have news that Google Earth did not, in fact, discover Atlantis in 2009.

Or, as the Atlanteans would have you believe, they are covering up the fact that they found Atlantis for their own nefarious reasons.

You may remember the news from two years ago, when the newly-launched Google Ocean began to add imaging data on the topography of the ocean floor.  You could, if you wanted to, view the mysterious and inaccessible contours of the abyssal plains and mid-ocean ridges.  It was all very cool, a real triumph of science and technology.

Until, that is, they posted the following, from off the coast of Africa: 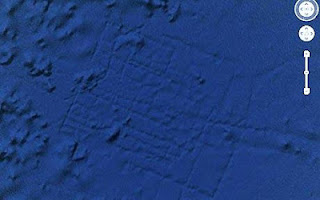 After all the woo-woos stopped having multiple orgasms, and actually stopped to think about it, at least some of them realized that it couldn't be what it looked like, because the scale was all wrong.  If this was the remnants of a sunken city, the streets of the city (presumably the apparent grooves in the photograph) would have had to be over a half a mile across.  Google Earth, for their part, immediately recognized what was going on, and said that the "grid lines" didn't exist, that they were a sensor artifact produced by using overlapping data sets that didn't quite line up.

So, last week they released a new image, with the problem compensated for, and lo and behold, the "sunken city" disappears: 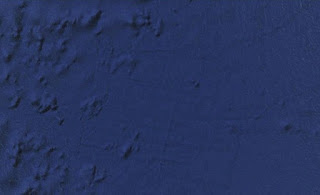 So you'd think that at that point, all of the Atlanteans would sort of go, "Oh.  Okay.  I see now.  What a bunch of nimrods we were," and go home.

Sites have started springing up all over that Google Earth is participating in a giant coverup, that they slipped up in letting the original image become public, and now they're trying to cover their tracks.  (For one particularly funny example, watch this short YouTube video from one of the conspiracy-theory wingnuts.)  The new image, they say, has deliberately erased evidence of the existence of Atlantis -- it was the original image that was correct.

What I find the funniest about all this is that none of them seem to stop to consider what possible motive Google Earth would have for eliminating the evidence of a ruined city on the sea floor.  If the thing exists, it would only be of interest to archaeologists -- it's not like there's anything down there that is worthy of all of the effort.  If anything, you'd think that the scientists working on Google Earth would be excited if it were true -- scientists tend to get that way when they come across new and unexpected findings, because that's how you make your name in the scientific world, and (more importantly) that's how you get grant money.

So anyway, I'd like to end with a picture of what's really down there.  You know, what Google Earth et al. are covering up. 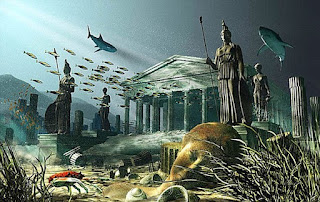 Yes, I know that Google Earth didn't show any statues with spears.  That's because they systematically removed all evidence of them from their maps.  But they're down there, because Plato said so.  And when it comes to evidence, who are we going to trust - a Greek philosopher from 2,500 years ago, or a bunch of silly old stick-in-the-mud Ph.D.s in science?