A friend of mine sent me a link yesterday with the sinister message, "Dude, you are so screwed."  When I clicked it, it brought me to a webpage called "TATTOO: The Cup of Devils," wherein I learned that anyone with tattoos is doomed to the fiery pit for all eternity.

I have two tattoos, one of them that I got some years back, and the other one done only last month.  Little did I know that when I went under the needle gun, I was sealing my fate. 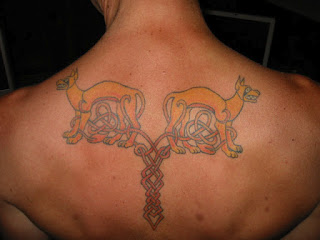 My one-way ticket to hell

Other things I learned on this page:

Throughout history the tattoo bears the mark of paganism, demonism, Baal worship, shamanism, mysticism, heathenism, cannibalism and just about every other pagan belief known. The tattoo has NEVER been associated with Bible Believing Christians. And whenever and wherever, in history Christianity appears – tattoos disappear. The only exception -- 20th century, lukewarm, carnal, disobedient, Laodicean Christians.

The problem, the author (Terry Watkins) says, is that tattoos are not just decorative, they're portals for demonic entities:


The tattooist, shaman or the occult priest many times uses the tattoo as a point of contact, or inlets into the spiritual world. The tattoo is much more than just a body decoration. It’s more than just a layer of ink cut into the skin. In fact, the tattoo in every culture, in every country, up until the 20th century, was a vehicle for pagan spiritual and religious invocations. Even today, in many countries (including the United States), the tattoo is believed to be a bridge into the supernatural world... Tribal tattoos are designs that bear serious symbolic mystical and occult meanings. Tribal tattoos, especially, are possible channels into spiritual and demonic possession.

My designs aren't "tribal," they're Celtic, in honor of my Scottish and Breton ancestry, and also because they're cool-looking.  So I wonder if that counts?  It'd be kind of a shame if I went to all of that trouble and pain, and could have gotten myself a Demonic Portal, but chose the wrong design, and now all of your better demons are possessing guys with Maori tribal tattoos on their shoulders. 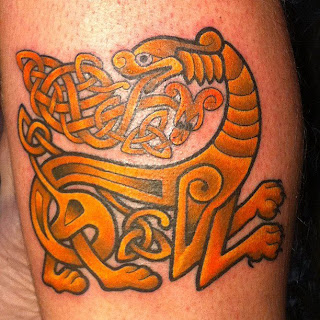 And if once wasn't bad enough, I went and did it again.

Some of the source material that Watkins takes out of context is downright funny, especially the stuff from Ronald Scutt's book Art, Sex, and Symbol.  This book, which is a scholarly look at ritual art (including tattoos) through the ages, is neither pro nor anti-tattoo, but to read the quotes that Watkins lifts from Scutt, you'd think that it was composed of hundreds of pages of biblically-based warnings.  My favorite is the quote alleging that tattoos are associated with "megalithic building, ear-piercing, and serpent worship."  To which I can only respond that I have yet to build a megalith, I have no piercings of any kind, and I like and respect serpents, but "worship" is a bit of an overstatement.  The quotes from Steve Gilbert's book Tattoo History: A Source Book also provide for some entertaining examples of how you can lift quotes from anywhere to prove anything, as long as you cherry-pick carefully:

When Cortez and his conquistadors arrived on the coast of Mexico in 1519, they were horrified to discover that natives not only worshipped devils in the form of status and idols, but also had somehow managed to imprint indelible images of these idols on their skin. The Spaniards, who had never heard of tattooing, recognized it at once as the work of Satan.

Of course, the Spanish thought lots of things were the works of Satan, including most of the art work, historical artifacts, and writings of damn near every civilization they ran into, so I'm not sure they're all that reliable a source on the subject.

Watkins goes on and on about how evil it all is, concluding with:


Throughout history tattoos have symbolized rebellion. There’s nothing normal about a tattoo. A tattoo screams of unabashed rebellion and sexual deviancy...  Is there any doubt about who the "master tattooist" is???

Which reminds me of the Saturday Night Live "Church Lady" sketch, that always ended with, "Could it be... SATAN?"

So, anyway, that's today's jaunt through the world of bizarre superstition.  I find it kind of curious that Watkins is this concerned about body art, frankly; you'd think that as a bible-toting Christian, he'd spend more time talking about rather more pressing issues, such as the fact that "Love thy neighbor as thyself" hasn't really sunk in all that well for a lot of people.  And as far as me, I suppose I was headed to hell long before I got my first ink, given that at that point I was already an atheist.  But reading Watkins' webpage does make me realize how neglectful I've been, as a tattooed person.  I still have a long way to go in the cannibalism, unabashed rebellion, and sexual deviancy departments, and I've got to get right on that serpent-worshiping thing.  Oh, and I wonder where I'm going to put the megalith I'm supposed to build?  I'm thinking the front yard.  That would certainly make a statement.