It's been a busy week, here in the cryptozoological wing of the Skeptophilia research offices.  We're currently tracking three stories about alleged spine-chilling, bizarre, non-human life-forms, and we're not even talking about the cast of Jersey Shore.

First, we've got a story from The Examiner about an old man in the Philippines who was attacked by a shape-shifting monster called an "aswang" or "manananggal," which attacks humans and eats their livers.  The still photographs show, lo and behold, an old man being confronted by someone who looks like he's wearing one of the rubberized monster heads from the movie Alien: 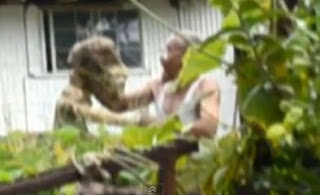 So, anyway, the story goes on to say how there's a video of the incident but it "hasn't been released yet," which sounds kind of fishy right from the get-go.  Also a bit sketchy is the lack of detail; the victim wasn't named, although it does say that the victim's brother "José" filmed the entire incident.  Which raises the question of why he didn't run to help, instead of standing there with a video camera while his brother had his liver eaten.

Then, I noticed that the guy who went to the Philippines to gather information for the report was none other than Blake Cousins, who appeared in Skeptophilia just last week -- as the "investigative reporter" who did the video clip about the 12-year-old boy from Australia who made himself an "Atlantean copper headband" that allowed him to talk to spirits from inside the Hollow Earth.  In fact, even the site Phantoms and Monsters, not generally the most skeptical of sources, called this story "possible buffoonery."  (Here)  So given those two strikes against it, this story is almost certainly a non-starter, especially considering the credibility Cousins has, or the lack thereof.  So let's move on to our next story, which takes us to the dry hillsides of Utah.


The UK Daily Mail is reporting on a story about some hikers near Ben Lomond Peak in Weber County, Utah, who saw... a goat man.

In fact, one of them, Coty Creighton, took a photograph of Goat Man: 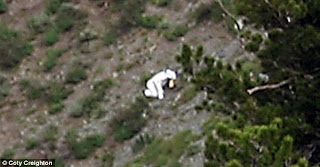 Creighton told reporters at the Utah Standard Examiner that he "...thought it was a deformed goat. It was clumsy, not nimble…  He was on his hands and knees, crawling along the mountainside."

In a separate communication with Salt Lake City's CityWeekly.Net, Creighton said, "I was racking my brain trying to figure out what other type of animal it could be.  An albino bear?  A honky Sasquatch?"

At this point, I had to stop for a moment to clean the coffee spatters off my computer screen.

Creighton, however, got out binoculars and took a closer look, and found out that it was none of those things.  It was...

Creighton stared at the guy for about five minutes, and at some point, the Goat Man realized he was being observed, and stopped moving -- and just stared back.  Creighton got creeped out, and said he wasn't going to get any closer, because "Something was definitely off with that guy."

I'd say that's a major understatement.  So if you're going to be in Utah any time soon, make sure you keep your eyes peeled for Goat Man.


Our third report comes all the way from the Moon, via MUFON (the Mutual UFO Network) and the site Ghost Theory.  (Source)  It shows a still photograph, and a video clip, of a pulsating, cloudlike "anomaly" hovering over a lunar crater.  Scott McMan, of Ghost Theory, writes, "The person who submitted the video seemed as confused as I was because he could only make the following statement: 'I don’t know what to make of this object.'"  People who've analyzed the video say that the "entity... moves in a lifelike fashion."

Well, I'm a bit at a loss myself, but my initial reaction is that it looks like a stationary object whose image is being distorted by the passage of the light rays from it through the Earth's atmosphere.  This effect, similar to the heat shimmer you see above a hot roadway on a clear day, is caused by light bending as it passes through media with different indices of refraction, warping the image, and (if the medium itself is moving) making it appear that the object itself is moving.  I'll admit, though, that it's pretty bizarre-looking.  And even though I strongly suspect that this has a perfectly natural explanation that has nothing to do with an alien entity moving in a lifelike fashion, at least it doesn't shout out "hoax!" to me.

Which is more than I can say for the "aswang" photographs and the Utah Goat Man.
Posted by Gordon Bonnet at 4:44 AM