A study in tropical colors

As my regular readers know, I just got back a couple of days ago from a two-and-a-half week trip to Malaysia.  I thought it might be interesting to step aside for a day from my usual agenda of lobbing verbal bombs at the woo-woos, and give a few of my impressions of this country.

I was drawn to Malaysia by the birds.  I am a fanatical birdwatcher, an avocation that I am more and more beginning to think of as being some kind of benign mental disorder.  The trip was an organized excursion put together by Birdquest International, a UK-based company that specializes in taking people to where the birds are.  So everyone on the trip shared my obsession -- all seven participants, and the two guides.  We shuffled along the trails in a tight, silent little pack, binoculars in hand, scanning trees and underbrush, listening for unusual calls or songs -- and then launching into action like a SWAT team when one was seen:  "Bulbul!  Olive-winged!  Large tree with round leaves, in foreground, nine o'clock, moving left!"  And everyone would swivel around to find the bird, and one by one you'd hear, "Got it, thanks!" and every once in a while a "Dammit!  It flew!"

But the birds were spectacular.  The grounds of the lodge where we stayed in Taman Negara National Park were frequently graced by four or five Crested Firebacks, a pheasant species that looks like it's ready for a fancy costume ball.  Not all of them were that easy; it took us several hours of work to locate the elusive Garnet Pitta, a bird that has been called the Jewel of the Rain Forest (photo courtesy of the Wikimedia Commons): 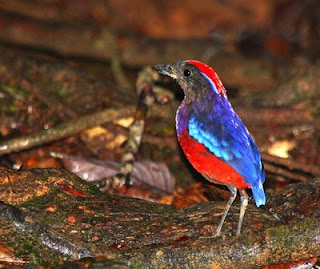 We never, ever were without our binoculars, except when we were sleeping.  We wore them at meals, during rides in the van from one locale to another, and when we were hauling our luggage around.  And all it took was the cry of "Bird!" to stop us from all other pursuits and hoist the lenses into the air to see what might have flown in.

Of course, it's not that that was the only attraction to Malaysia.  It's a stunningly beautiful country, with huge stands of pristine rain forest, enormous trees draped with lianas and ferns.  A botanist would go mad here from the diversity of plant life.  I pride myself on my knowledge of plants, and I only recognized perhaps 10% of what I was seeing.  Take this strangely-shaped leaf for example: 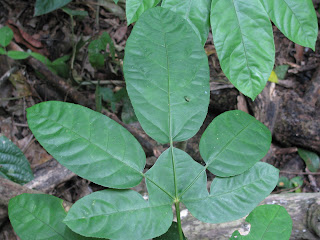 No idea what it is, other than "cool."  Because of the thin soils, most of the trees have these sculpted buttress-roots, that never failed to remind me of Old Man Willow from The Lord of the Rings: 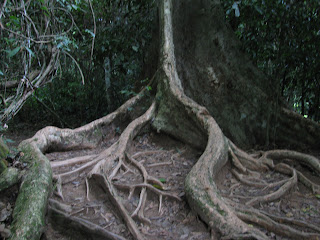 Besides the biology of the place, there's the culture.  The food was always interesting, and often delicious.  We had a hundred different takes on curry, most with coconut, a food I heartily approve of.  I finally got to try durian, the famous spiky (and smelly) fruit of Southeast Asia.  Durian has such a pungent smell that it is illegal to open one on public transport or in a hotel room, and I found first-hand that the smell clings to your skin and clothing for hours.  What does it smell like?  Let me quote food writer Richard Sterling: "Its odor is best described as pig shit, turpentine, and onions, garnished with a gym sock."  Anthony Bourdain, even though he likes the stuff, says that after eating it "your breath smells like you've been French-kissing your dead grandmother."  So, of course, I had to try it.  And... I thought it was delicious.  The flavor is kind of indescribable -- musky, sweet, creamy, a little oily.  But definitely wonderful, and like nothing else I've ever tasted.

I also ran face-first into sambal ulek, which I have renamed "Malaysian Death Sauce" because I had no idea how freakin' hot it was until I had slathered it all over my breakfast.  Now, I'm from southern Louisiana, and have a very high (probably genetic) tolerance for pepper, and this was hotter than anything I've ever eaten.  It was only my hatred of losing face amongst comparative strangers that kept me from dumping my plate and taking a second serving with three drops (rather than three heaping spoonfuls) of the stuff.

And speaking of hot: Malaysia is also the other kind of hot.  The temperature varies from blazing hot, all the way up through sauna and right into the realm of pressure cooker.  I was constantly wringing wet with sweat, and I usually have a high tolerance for hot weather.  In the highlands (we spent four days at Fraser's Hill in the Cameron Highlands of central Malaysia) it was a bit cooler, but that's like saying that "compared to a blast furnace, a bread oven is comfortable."  It was still near 100% humidity, and I think the temperature only dropped below 80 F for a brief time at night.

The heat and humidity also encourage a variety of animal life, and not all of it is of the oh-look-at-the-cute-little-monkey type.  Malaysia has leeches.  Terrestrial leeches.  These live in the leaf-litter of the forest floor, attach themselves to your shoes, and then crawl up your pant leg in search of dinner.  Most of our party got bitten at least once -- I was one of the only exceptions, probably because I daily doused my boots in high-strength insect repellent, to the point that by the end of my trip my boots were composed of 5% shoe leather and 95% DEET.  If I ever get rid of those boots, I will probably have to file an Environmental Impact Statement.  But I didn't get bitten, unlike poor Linda, a retired nurse from Oakland who got bitten about a dozen times and constantly had large bloodstains on her socks, pants, and shirt.

One of the most curious things about Malaysia was the pervasive role of religion.  61% of Malaysians are Muslim; we saw many veiled women, and daily heard the chanted call to prayer broadcast over speakers.  But 61%, although a majority, means that there are plenty of other beliefs; there are substantial numbers of Hindus (whose brilliantly-colored temples were often seen on our van trips), Buddhists, and even a few animists amongst the Orang Asli, or aboriginal settlers of the peninsula.  But the Malaysians are, by and large, a people amongst whom the adherence to some religion is taken as given, and who have a big focus on decorum and morality.  I saw a few tourists who were showing more skin than was considered proper -- women in short-shorts, men who were shirtless -- and saw more than one skew glance being given to them.  I wore shorts on occasion (while not actively birding in the forest; wearing shorts in the Malaysian forest is like waving a sign in front of the leeches that you're open for dinner) and wondered if the tattoo on my leg would attract any negative attention.  I didn't notice any, but you have to wonder what the more conservative citizens think of some of the foreigners they see.

Last: Malaysia is far away.  It took over 24 hours in the air to get me there, and it is exactly half a day off from my home time zone; when I Skyped with my wife, in the places where wifi was available, I was always had the vertigo-inducing awareness of being on the opposite side of a giant spinning ball.  When it was day in New York, it was night in Malaysia, and we had to plan to meet -- as she was getting ready to head to work, I was getting ready to head to bed.  On the way back, I took the longest nonstop flight in the world -- Hong Kong to New York City/JFK.  Sixteen hours in the air.  And although I had no travel mishaps whatsoever -- not so much as a five-minute departure delay -- I do wish I had not been on the special Screaming Toddler Flight.  I've never been so glad to get off a plane.

So, anyway, those are a few impressions of my first visit to the continent of Asia.  I came away with an impression of a friendly people, a commitment to protecting their beautiful environment, and 199 "life birds" -- species I'd never seen before.  I survived sambal ulek and durian, and all in all, had a wonderful time.  Still, it's nice to be home, where the temperature is mild, breakfast sauces don't burn your face off, and you can walk in the woods without being bitten by leeches.
Posted by Gordon Bonnet at 4:35 AM