I spend a lot of time on this blog railing at the internet as being a conduit for nonsense.  But today, I have a positive story, a wonderful story, about a Norwegian skeptic, some woo-woo chocolate makers, and an unsuccessful attempt by the latter to bully the former into silence.  [Source] [Source]

Xoçai is an American chocolate company.  Besides having a brand name that sounds like a Klingon death threat, they have a seriously New Age/alternative health slant on their marketing, and make a variety of wild claims about what their product can do for you.  The following advertisement was widely distributed in Norway: 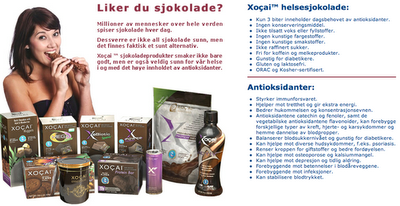 
DO YOU LIKE CHOCOLATE?
Millions of people all over the world eat chocolate every day. Unfortunately not all chocolate is healthy, but a healthy alternative does actually exist. Xoçai chocolate products don’t just taste nice; they’re also very healthy because of the high antioxidant-content.
XOCAI HEALTH CHOCOLATE:
- Three bites cover your daily need of antioxidants
- No preservatives
- No added wax or fillers
- No artificial coloring
- No artificial sweeteners
- No refined sugar
- Caffeine and sugar free
- Beneficial for diabetics
- Gluten and lactose free
- ORAC and Kosher certified
ANTIOXIDANTS:
- Strengthen the immune system
- Help against fatigue and give extra energy
- Improve memory and concentration
- The antioxidants catechin and phenols, as well as the vegetable antioxidants flavonoids, can prevent different forms of cancer, heart disease and the formation of blood clots
- Balances blood glucose levels and are beneficial for diabetics
- Can help against skin disease, e.g. psoriasis.
- Cleanse the body of toxins and improve digestion
- Can help against osteoporosis and calcium deficiency
- Can help against depression and early aging
- Prevent inflammation of blood vessel walls
- Prevent infections
- Can stabilize blood pressure

Yes, Xoçai is actually claiming that eating their chocolate is "beneficial for diabetics" and "can prevent cancer."  I suppose that at least we should be thankful that at least they didn't include "helps to remedy the aftereffects of Dementor attacks."

Anyhow, a Norwegian blogger, who (for reasons that will become obvious) has preferred to remain anonymous, challenged these claims.  (My sources, links posted above, gave him the pseudonym "Morten" and I will stick with that to avoid confusion in case you are interested in reading further about this.)  Morten questioned not only the unsupported medical claims but also Xoçai's sales model, which is an Amway-style MLM (Multi-Level Marketing) approach.  Shortly after he wrote his piece, he received the following email:

As an association for over 9 000 Norwegian Xoçai-members, we have over the last year received over a hundred complaints from our members concerning your blog www.[anonymous].no

From the signals we have received it will be a seven digit lawsuit, and that’s not in Norwegian «kroner». This because the company now wishes to make an example once and for all, and such create precedence for other countries in Scandinavia and Europe.
We have also been asked on numerous occasions to account for your blog and person on our website, which we now have done on the grounds of information sent by our members. You can read more on: www.sjokoservice.no

We are of course aware that the company [anonymous company] doesn’t have any responsibility for your blog – but as it can be documented that a lot of your activity on the blogpage has been during work hours, we assume it is with your employer’s [anonymous company] knowledge and blessing in accordance with your terms of employment.

In the light of your cynical activities it must be admitted that this isn’t the best advertisement for the company [anonymous company] and your co-workers, neither now nor when the process starts.

The email was also sent to his employer and various coworkers.

Sjokoservice Norge, the Norwegian legal arm of Xoçai, followed this up by a post on their own website that included Morten's name, place of employment, telephone number, and address, and a sly suggestion that Xoçai employees might want to "contact (him) directly."

Then it got worse.  Sjokoservice Norge sent Morten a second email, with an attachment that included Morten's address, the names of his parents, siblings, and wife, and a direct statement that the information was being sent out to nine thousand Xoçai employees!

Morten contacted Xoçai's representatives, asking them to elaborate on which claims he had made that they considered incorrect, and saying that if they could prove that he had misspoken, he'd amend or remove the post.  Sjokoservice Norge said that it was too late, that they had already initiated a lawsuit, but hinted that they might be willing to stop pursuing legal action if Morten deleted his posts and removed all mention of the company from his blog.  Morten caved, and removed the posts.

So far, I guess the message is: "don't make a woo-woo mad."  And at this point in reading the source material on this story, I'm remembering all of the snarky posts I've done in the past about various weird claims, and wondering if maybe I should change my name and move to a small uncharted island off the coast of Mozambique.  But then, I continued reading, and found that a wonderful thing happened.

Have you ever heard of the Streisand Effect?  It occurs when someone attempts to censor or suppress a story on the internet, and as a result causes the story to become viral.  (The name comes from a 2003 lawsuit by Barbra Streisand that attempted to force photographer Kenneth Adelman to remove an aerial photograph of her California mansion from an online photograph collection; the photograph was viewed six times before the lawsuit was filed, and 420,000 times afterwards.)  Well, in their heavy-handed, mafia-style bullying of a blogger who asked too many questions, Xoçai may have triggered the same thing.  Morten's original posts, which he removed when Xoçai threatened him, have been translated and posted on a mirror site (read them here and here).  As far as Sjokoservice Norge, which was acting as Xoçai's brass-knuckles organization in Norway, chairman Terje Babsvik and his brother, Jon-Atle Babsvik, have denied any knowledge of the threatening emails to Morten, and Roger Meyer, Sjokoservice Norge's spokesperson, has "gone on vacation" and "is impossible to get a hold of."  The whole thing has bounced into the skeptics network worldwide, and has been featured on The Baloney Detective, Letting Off Steam (you should definitely check this one out and read the responses by Xoçai drones; they come off sounding like scary Scientologists), and Sharon Hill's wonderful site Doubtful News, among many.

Of course, a rich corporation like Xoçai is probably not going to be seriously harmed by this -- although it'd certainly be nice if they stopped making unsubstantiated (and almost certainly false) medical claims in their advertisements.  And Xoçai has attempted to put the quietus on the story by flooding Google with stories that use the keywords "Xoçai," "threatens," and "blogger," but lead you to links that basically state how wonderful their product is, and how it "threatens" rival and inferior chocolate brands, so much so that many "bloggers" mention it.  Thus far, I'd have to call this Chocolate War a draw.  But even if it doesn't knock them back as hard as I'd like, it does lead me to one cheering conclusion; given the chance, the internet can be a force for rationality.

Oh, and also: don't piss skeptics off.  We generally know how to do research, and we're pretty good at arguing from a factual basis.
Posted by Gordon Bonnet at 2:53 AM