First, we have a report in from West Berkshire in the UK, where a resident has called in a sighting of a mysterious creature that's been nicknamed "the Creature from Curridge."  [Source]

Spotted on October 3 by a businessman named Don Prater, Curry (you just know eventually that's what they'll call it, might as well start now) was described as being a gray, oddly-proportioned quadruped that was unlike anything Prater had ever seen.

Prater was out for an early-evening walk with his border collie, Bozzy, when he saw the bizarre creature.

"After the footpath bends left, about 25 yards ahead of us were two animals," Prater told reporters for Newbury Today.  "One of the animals looked like a domestic cat but the other one stunned me.  It was a dark or grey color.  The height of its head was about two foot but it had the head of a deer.  The neck was about eight to ten inches long and thin like a swan’s neck.  The body was a cross between a cat and a dog.  It had a bushy tail.  Everything about it was wrong."

Prater went around the neighborhood, asking if anyone else had seen anything like it, but all he got were negatives.  He did provide reporters with a sketch of what he'd spotted: 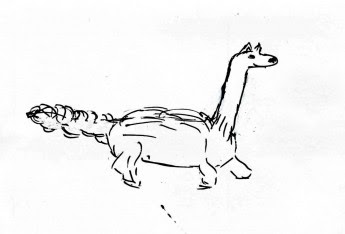 For comparison purposes, here's a photograph of an alpaca: 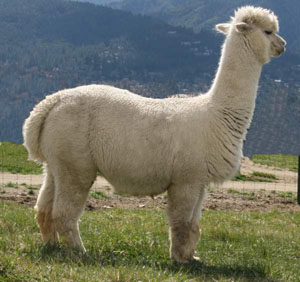 So I think we can all agree that we've got a pretty good match, here.


A little harder to fathom is a story that came to my attention through reports from several of my students.  "Have you heard about the Colorado... um, Mosquito Men?" one asked, and when I said, in some incredulity, "Mosquito Men?", he replied, "Well, not Mosquito Men.  But I'm pretty sure they fly."  So I did some searching for "Colorado Flying Men," and lo and behold, there have been a number of reports lately from the San Luis Valley of flying creatures that look like "a cross between Mothman and Dracula."  [Source]

Notwithstanding the fact that Mothman and Dracula share the characteristic of both being fictional, I began to do a bit of digging, and I found that the San Luis Valley is a hotspot of all sorts of weird stuff -- it has some of the USA's highest numbers of UFO sightings, reports of cattle mutilations, reports of cryptids, and reports of various other odd goings-on.  Besides the flying humanoids, there have been sightings of thunderbirds, and no, I'm not talking about the car: 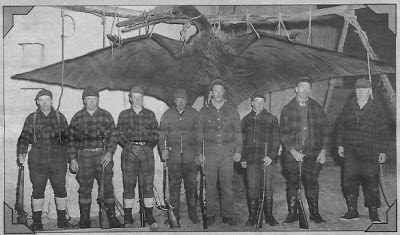 In fact, so much bizarre stuff happens in the San Luis Valley that it's beginning to get a reputation as a magnet for wackos.  "When the going gets weird, the weird end up in Colorado's San Luis Valley," writes Christopher Weir in Metroactive.  "Hometowns are like families.  You always think yours is more bizarre or dysfunctional than the next.  Not so, of course...  As for hometowns, yours has nothing on Crestone and the surrounding San Luis Valley.  Wondrously depicted by self-appointed paranormal investigator and Crestone resident Christopher O'Brien, the San Luis Valley -- a breathtaking expanse that straddles southern Colorado and northern New Mexico -- is plagued by flying saucers, cow vandals, space guns, serial killers, spook lights, ghost trains, coma healers, prairie dragons and even something called a 'bi-locating nun.'"

So this led me to wonder what a "prairie dragon" was (I found out that they are semi-transparent reptiles that appear in groups and try to get into your home), and of course, any mention of a "bi-locating nun" was bound to stir my curiosity (turns out that this refers to a 17th century Spanish woman, Sister Marie de Jesus Agreda, who visited the San Luis Valley in spirit form, successfully converted some natives, and because of the claim narrowly escaped being executed by the Inquisition).

So, anyway, about the Flying Men.  Apparently, they've been seen by several people over the past two years, flapping along with huge membranous wings, and making "high-pitched hissing or screeching sounds."  Of course, no one has any hard evidence of this, or even any photographs, not that this would exactly count for evidence in these days of PhotoShop.  But the reports continue, and cryptozoologists worldwide are now excitedly turning their eyes toward the Rocky Mountains.

As usual, I wish them all luck.  Being a biologist, no one would be more thrilled than me if some of these reports of bizarre creatures, unknown to science, turned out to be true.  And if I were a betting man, I'd say that they'll have a greater chance of success searching around in the high deserts of Colorado than they would looking for Curry, the Wild Alpaca of West Berkshire.
Posted by Gordon Bonnet at 2:38 AM