As a kid, I loved scary stories.  Still do, really.  And one of the tales I remember reading in one of those books with names like True Tales of Terror was the famous story of the moving coffins of Barbados.

You might well have heard this one yourself, as it's made the rounds, and is often used to support the contention that Spirits and Mysterious Forces of the Supernatural actually exist.  Here's an abbreviated version; if you'd like to find out more, a little digging will turn up a more detailed, and undoubtedly scarier, description of the alleged facts of the case.

The Chase family of Barbados were wealthy plantation owners, and had a family vault carved out of stone in the churchyard of Christ Church Parish, in the town of Oistins.  The first person whose body was placed in the vault was a Mrs. Thomasina Goddard, in 1807.  Two-year-old Mary Ann Chase was laid to rest there in 1812, and her older sister Dorcas Chase in 1814.  A few weeks later, Dorcas and Mary Ann's father, Thomas Chase, died, and when the vault was opened to receive his coffin, the three coffins that had already been interred there were found moved -- none were in their original places.  The three coffins were put back where they should have been, and the Chase family patriarch's coffin added.  The family suspected that the disarray had been caused by an attempted grave robbery, and to foil further attacks they had a large stone cemented across the opening. 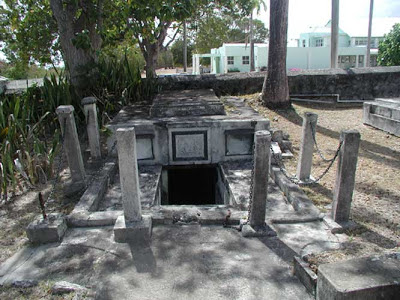 When it was reopened four years later for the burial of eleven-year-old Charles Brewster Ames, the coffins were again found moved, even though the stone and its cement binding were undisturbed.  Even Thomas Chase's heavy, lead-lined coffin was out of place.  Fifty-two days later, it was again reopened for the burial of Samuel Brewster, and once again the coffins were in disarray, including one of them standing against the wall head-downward.

By this time, the story was becoming a well-known mystery across the island, and when it was opened again in 1819, and again found in a state of chaos, the governor of the island, Lord Combermere, ordered an investigation.  A layer of fine sand was spread on the floor of the vault, and the opening was sealed again, an insignia of the governor's pressed into the wet cement to prevent any trickery.  The governor ordered the vault reopened in 1820 -- and again, the same result.  The coffins were moved -- but the sand, and the seal, were undisturbed.

The governor ordered the coffins reburied elsewhere, which was promptly done.  The vault was abandoned, but is still in existence, and many people visit it yearly to see the site of such a chilling legend.

Now, of course, the first question for a skeptic is: what is the quality of the evidence?

The fact is: not very high.  The originator of the tale seems to be Reverend Thomas Orderson, Rector of Christ Church, who claimed to have been there at the various openings of the vault.  The problem is, the sources of the time, based on Orderson's recollections, all vary in their details -- the one I presented above is the one that has appeared in most recent publications.  But the earliest versions, such as the one that appeared in James Edward Alexander's Transatlantic Sketches in 1833, and other recountings of the story that were published in 1844 and 1860, disagree with each other considerably.

Add that to the fact that folklorist Andrew Lang went to Barbados, and combed through the registers of Christ Church Parish for anything that could substantiate the information contained in the story -- and found nothing.  Not even the newspapers of the time, which certainly would have published such a sensational story, had a hint of the wild goings on in the Chase vault.

Much has been said about the possible causes of the "restless coffins" incident -- seepage of water into the vault, earthquakes, and the more outlandish answers of vengeful ghosts, voodoo, or evil curses.  But in order even to have a need for an explanation, we have to establish first that there is something to explain -- and in the case of the Barbados coffins, it seems likely that the whole thing was spun from whole cloth, probably by Reverend Orderson himself.

Psychics and ghost-hunters often get impatient with skeptics for their tendency to turn a wry eye on anecdotal evidence, but the fact is, eyewitness accounts and recollections of events are notoriously unreliable.  Odd, isn't it, that eyewitness testimony is considered the highest level of reliability in a court of law, when in science, it's usually considered one of the lowest?  It is simply too easy to fool the human perceptual apparatus, to twist memory or engender memories that are entirely false, and (not to put too fine a point on it) to lie outright.  It may be that juries take eyewitnesses seriously, but in science, we need more than just someone saying, "I saw it happen myself, I remember it clearly."
Posted by Gordon Bonnet at 4:35 AM