What is the proof, you might ask?  It's a photograph, to wit: 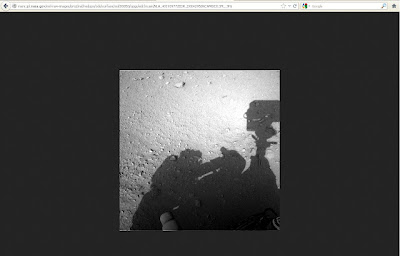 What we are looking at, claims an article over at UFO Blogger entitled, "Who is Cleaning the NASA Mars Rover Curiosity?", is a man in a space suit leaning over and applying Windex to the camera lens.

Amongst the many problems with this conjecture is that if NASA was smart enough to be able to send a human crew along with Curiosity, lo under our very noses, then presumably they would be smart enough not to post photographs publicly showing the shadow of one of said crew.  Especially given that supposedly they're doing this with evil intent.  Notwithstanding that argument, the poster over at UFO Blogger says if we don't buy the manned-mission hypothesis, we can only come to one other possible reasonable conclusion -- that the Mars landing was a fake, and the rover is currently sending back photographs from the Atacama Desert (and the article conveniently has some photographs of the Atacama Desert for comparison).  Way at the end the writer admits that it could be a "shadow illusion," but you get the impression that (s)he doesn't think that's likely at all.

And neither do the people who posted the comments section.  A couple of samples will suffice:

"Why would they pull such a scam? This government truly sucks. Not even surprised by anything anymore."

"You know guys... its becoming clear to me that NASA is doing this purposely for the 'conspiracy crowd'. they know we're not buying it yet they still have us distracted, our attention diverted, from whats really important as we waste our time and mental energy on their BS. we need to totally ignore NASA at this point."


Yup.  Those doggone attention hogs down at NASA are never satisfied unless we're watching them.

Of course, the other problem with this whole idiotic contention is that it's remarkably difficult to determine what an object looks like from its shadow.  If you think I'm exaggerating, take a look at this amazing shadow art by Sue Webster and Tim Noble, in which mounds of trash illuminated with light from a particular angle create shadows that look like people, a pair of rats having sex, two severed heads on spikes, and a variety of other things.  Add a bit of pareidolia into the mix -- the tendency of people to see human forms in random shapes -- and you've got an explanation for the shadow in the Mars photograph that doesn't require you to believe that NASA is either duping us all by sending the rover to Chile, or else sneakily including a human crew on the mission for their own nefarious purposes.

So anyhow, that's pretty much that, as far as I can see.  The rover will have to manage without any space-suited humans cleaning the camera lens, and the woo-woos will have to find another ridiculous conjecture to blather on about.  The latter might actually be a forlorn hope, because as we've seen before, once woo-woos catch hold of an idea, they hold on like grim death despite the most cogent argument to the contrary.  But at least the rest of us can go back to enjoying the photographs from Curiosity for what they are -- amazing images of our strange and uninhabited neighbor world.
Posted by Gordon Bonnet at 2:35 AM