A wing and a prayer

Like many biologically-minded types, I love dinosaurs and other strange, extinct animals.  My particular favorite group are the pterosaurs, which in my opinion are a level of awesome that has no parallel in any modern animal group.  (Well, seals and the big cats are close.  But my point stands.)  They varied in size from the tiny, furry Sordes pilosus, which was only 60 cm from wingtip to wingtip, to the impossibly huge Quetzalcoatlus, with a wingspan of over ten meters -- as big as a light plane.

Imagine what it'd be like if one of those glided past as you were mowing the lawn.

Unfortunately, none of us will ever have that experience, because the last of the pterosaurs died in the Cretaceous Extinction, 65 million years ago.  Apparently the group had been diminishing ever since Jurassic times, when they reached the peak of their diversity, but the asteroid collision that occurred at the "K-T Boundary" effectivevly knocked out the remaining species.

Well, that's what the paleontologists think, anyway.  If you ask young-Earth creationists, you get a different answer.

Take, for example, ObjectiveMinistries.org.  On an unintentionally hilarious page called "Pterosaurs: An Introduction," we find out that pterosaurs actually survived until the late Middle Ages, and were one of the species that gave rise to the idea of dragons:


Pterosaurs (ter’ə·sôrs) are flying reptiles with leathery or membranous wings attached to the sides of their bodies and supported by an elongated fourth digit on their forelimbs. They were created by the Lord on the fifth day of His Creation Week (Genesis 1:20-22) and were a constant presence in the skies over Eden, where they peacefully ate fruit and plants. After the Fall, many of their descendants degenerated to a carnivorous diet and became feared by man, although non-wicked specimens preserved on the Ark helped to temper this degenerative tendency after the Flood. Various Pterosaur kinds were common throughout Eurasia and Northern Africa up until the early Middle Ages and interacted extensively with Man. Today, although Evolutionists falsely insist that they are extinct, pterosaurs can still be found, hidden away in the unexplored wilds of our world.

We then are treated to a drawing that I guffawed over for about ten minutes: 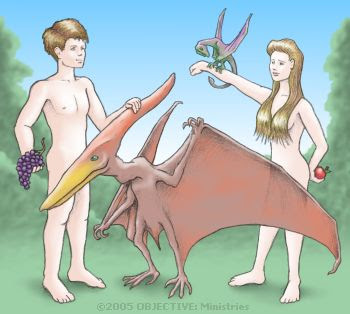 This picture has so many wonderful features that it's hard to pick out my favorite, but I think that the winner would have to be the way that the pterosaur's snout and wing fortuitously cover up Adam and Eve's naughty bits.  Also, is it my imagination, or does Adam look a little too much like Justin Bieber?

Anyhow, amongst the other fun things I learned on this website was that the creationists have dreamed up a new approach to making their mythology "scientific," which is called "baraminology."  Never heard of it?  Neither had I, until today.  It turns out that it hearkens back to the biblical idea of a biological "type" -- a "baramin," in their terminology -- and is a sneaky way of getting around the fact that there are now dozens of known, explained examples of one species becoming another (by the canonical definition of species as "a population of mutually interfertile organisms").  They explain away these scientifically-verified instances of evolution, several of which I looked at in greater detail in last year's post "Grass, gulls, mosquitoes, and mice," as somehow not counting because you don't have one "baramin" evolving into another.  "Unlike the incorrect Evolutionist model that supposes that life forms a continuous lineage from Mushroom to Monkey to Man," the ObjectiveMinistries website explains, "the Creation model -- supported by science and the Bible -- shows that the pattern of life is marked first and foremost by discontinuity.  When we step back and look at all the life on the planet, it is clear that we can group the various species into distinct baramins, and that the spaces between these baramins are discontinuities that no amount of Evolutionist fantasizing can bring together.  Humans (one baramin) do not form a continuity with apes (another baramin)."

So, it's the whole "microevolution but not macroevolution" foolishness again, not to mention the usual mischaracterization of what the evolutionary model actually says ("mushroom to monkey to man," my ass), with the added spice of claiming that the creationist model is "supported by science."

This last bit is especially humorous given a paper that just came out last week in Paleontologia Electronica, written by Phil Senter and Pondanesa D. Wilkins.  Senter and Wilkins, unlike the nimrods who write for ObjectiveMinistries.org, are actual scientists, and their paper -- "Late-surviving Pterosaur?" -- is a gem.

Apparently one of the creationists' pieces of "evidence" that pterosaurs didn't all die in the biblical Great Flood is a skeleton of a "dragon" that was studied, and drawn in detail, by 17th century Dutch engineer Cornelius Meyer.  Meyer's drawings of the skeleton were followed up by a reconstruction of what he thought the living beast had looked like:

So, of course, this has added fuel to the fire regarding pterosaurs surviving into modern times -- although why the survival of a prehistoric animal would support creationism is a bit of a mystery.  But since their arguments all basically boil down to stating a fact and claiming that god did it ("Pterosaurs!  Therefore god!  The human eye!  Therefore god!  Bananas!  Therefore god!  Ha ha!  We win!"), I guess that's not to be wondered at.

Be that as it may, it still did my heart good to find out that Senter and Wilkins did an intensive analysis of Meyer's drawings -- which, fortunately, were greatly detailed and scientifically accurate, even if his conclusions weren't -- and their conclusion is, unsurprisingly, that the "dragon skeleton" is a hoax.

The skull is from a dog.  The mandible is from a different dog.  The hindlimb is actually the forelimb of a bear.  The ribs are from a large fish.  The tail and wings are sculpted fakes, and do not match what is known from fossils about the morphology of pterosaur tails and wings.  In Senter and Wilkins' eloquent words:


The solving of the mystery of the zoological composition of Meyer's dragon puts to rest the notion that Italians encountered live pterosaurs in the seventeenth century. It also sheds light on a strange and little-remembered episode in Italian history.  The case involves superstition, rumor, political intrigue, shady dealings, mighty feats of engineering, the impressive talent of an artisan savvy enough to combine two dogs and a bear and a fish and make it work, and the sagacity of an engineer who risked his career to turn a potentially job-wrecking superstition to his advantage.  Such an episode deserves to be counted among one of the greatest zoological hoaxes of Renaissance Europe...  This piece of young-Earth creationist "evidence" therefore now joins the ranks of other discredited "evidence" for human-pterosaur coexistence and against the existence of the passage of millions of years.

I sometimes get asked, usually by science-minded laypersons, why I spend so much time fighting with the creationists.  What does it really matter if these people believe their Bronze-Age mythology instead of science?  And if that was all it was, I probably wouldn't be fighting them (laughing at them, maybe, but not fighting).  But this particular worldview comes with a desperate need to foist their view upon others, and (especially) to indoctrinate children with their anti-science, evidence-free way of explaining the world.  They're not content to believe what they want to, and discuss their silly beliefs in their churches; they want those beliefs taught in public schools, they want them written into biology textbooks, they want them respected (by mandate from state law) as somehow being on equal footing as reputable science.

And that's where I stop laughing, and put my fists up.

p.s.  If you haven't yet voted for Skeptophilia as the best skeptical blog of 2012, there's still time!  If you've enjoyed reading this blog, please go to Skeptic.org, scroll down to the "Best Blog" category, and put in Skeptophilia.blogspot.com.  I'd really appreciate it!
Posted by Gordon Bonnet at 2:47 AM