At the risk of repeating myself, popular media makes me crazy sometimes.

My most recent bout of media-fueled facepalming happened because of an article in Scotsman, entitled "Loch Ness Monster: New Species Linked to Sightings."  Being an aficionado of all things cryptozoological, I checked it out eagerly, and at the beginning I found the obligatory famous Nessie photograph: 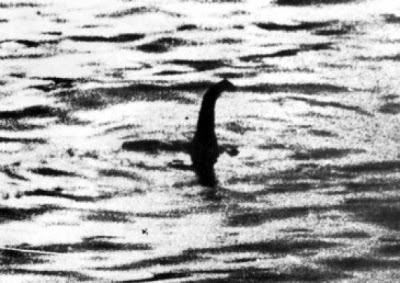 This was followed up by a description of a newly-named fossil animal, Tyrannoneustes lythrodectikos, whose remains were found a hundred years ago in a clay pit near Peterborough.  Instead of telling us much about the fossils, the article's author, Will Cooper, immediately leaps off a cliff into WooWooLand:


Edinburgh University’s recent discovery of a new blood-biting super predator species could shine new light on the Loch Ness monster say Loch Ness experts...  Adrian Shine from the Loch Ness Centre and Exhibition has spent around forty years studying the Loch, and believes that the newly discovered prehistoric predator could fit in with sightings of the famed Loch Ness monster.

We then see a reconstruction of the "blood-biting super predator," which I include below: 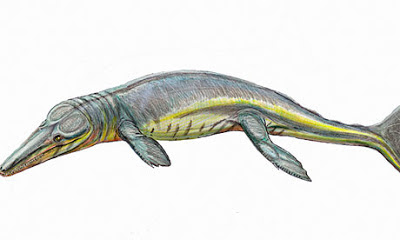 Well, this put me on notice right away; is it just me, or does this look nothing like the Loch Ness Monster?

Even Cooper seems to realize that he's gone a little off the beam, but he waits until the very end of the article to admit it:


However, suggestions of a link between this new blood-biting predator to Loch Ness have been discounted by a leading authority on dinosaurs... Angela Milner is a retired research associate with the Natural History Museum, she said: "Crocodiles do not like our climate. We’re talking about things that have been perhaps seen in Loch Ness — no way could a crocodile survive."

Oh, really?  That's the strongest objection you could think of?  How about the fact that the Nessie photo that opened the article was proven to be a fake in 1993?  How about the fact that Tyrannoneustes lived 163 million years ago, and has about as much relevance to whatever might be living in Loch Ness today as brachiosaurus has to the deer eating your vegetable garden?  How about some mention of the fact that Scotland was completely covered by a big freakin' glacier 1.5 million years ago, so any surviving pleisiosaurs would have been converted to pleisiosaur popsicles?

So, basically, we have what could have been an interesting news story -- scientists figuring out how a prehistoric animal fits with our understanding of vertebrate evolution -- and it turns into a ridiculous hash about the Loch Ness Monster.  (For a much better look at the story, and an example of popular media actually doing something right, go here.)

Being a science teacher, the whole thing makes me especially frustrated, because (unfortunately) kids are the most susceptible to the "I read it in the newspaper, it must be true" mentality.  I try to combat this in my Critical Thinking class -- almost the very first thing we talk about is that there is no such thing as unbiased media, and so any time you read, listen, or watch, you should keep your brain engaged.  But many, many children in this world reach adulthood without ever being taught to question what they're exposed to.

So I know that you can't take what you read in an online news source as gospel.  I also know that I shouldn't take this stuff so seriously.  I just wish that the people who write this tripe would try a little harder to represent science correctly.

But if any of my students come in and tell me today, "Hey, did you hear that they found fossils in Scotland that prove that the Loch Ness Monster is real?" I'm gonna want to find Will Cooper and shake him till his teeth rattle.
Posted by Gordon Bonnet at 2:35 AM