In the iconic movie (and book) Jurassic Park, scientists use genetic technology -- and samples of blood from the stomachs of mosquitoes preserved in amber -- to recreate various dinosaur species.  With, of course, terrible results, being that in science fiction, nothing good ever comes out of scientists trying to "play god."  Various people were messily devoured, and the ones that escaped (barely) were left to ponder if it was possible for scientific research to go too far.

We seem to be at the point of finding out.

Not, of course, that it will be dinosaur-era animals, at least not at first.  Way too little DNA is left intact in fossilized remains from 65-plus-million years ago to pull a Jurassic Park-style trick and resurrect, say, the Pteranodon (always one of my favorites).  But we will, in, short order, see the first reborn extinct species created in a lab.

The best candidate for the winner in this Race to Raise the Dead is likely to be the Gastric-brooding Frog, a bizarre amphibian species from Australia that gets its name from the females' behavior of carrying their tadpoles around in their stomachs.  The frog was declared extinct in the wild in 1979, and the last captive individual died in 1983. 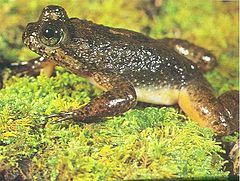 The technique is simple to describe, and immensely difficult in practice; obtain DNA samples from preserved specimens, insert that DNA into the fertilized egg cell of a related species that has had its own DNA removed, and hopefully this zygote will begin to divide and develop -- into an individual of the species that donated the DNA.

Of course, a million things can go wrong.  The role of genetic switches in development is still a new area of research; it's known that your DNA when you were an embryo was different than your DNA is now, especially with regards to which segments were being actively transcribed and which were not.  In order to get this technique to work, the nucleotides in DNA not only have to be in the correct sequence, the genes encoded therein have to turn on and turn off in a tightly-orchestrated fashion in order to produce a normal individual.

The hurdles, however, haven't discouraged scientists in this field.  The research team working on the Gastric-brooding Frog, led by Mike Archer of the University of New South Wales, has actually gotten the genetically altered embryonic cells to divide, apparently in a completely normal fashion, which has encouraged other groups working toward the same goal.  In the United States, a group called "Revive and Restore" is trying to bring back the Passenger Pigeon, once the most abundant bird in North America, which was driven to extinction by overhunting in 1914. 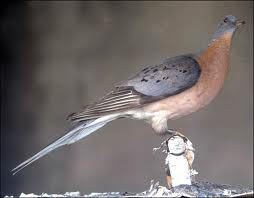 And Ben Novak, of the Passenger Pigeon "de-extinction" project, believes that it is only a matter of time.  "This whole idea that extinction is forever is just nonsense," he said, in an interview in Forbes.  "Someone could make a major breakthrough in next two years."

Me, I'm of two minds about this.  As a biologist, I have to say that the whole idea is just tremendously cool.  The idea that I could one day see a formerly extinct animal, alive and well, is just thrilling.  I'd give a lot to see a Thylacine, a Carolina Parakeet, a Moa, a Kaua'i O'o, or a Giant Ground Sloth.  And what about more remote animals, ones from further back?  How would you like to be eye-to-eye with a Brontops? 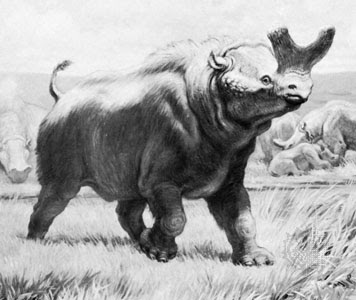 Of course, the more distant in the past you reach, the more difficult the procedure becomes.  Not only has any DNA from prehistoric animals had longer to degrade, often to the point of there being no useful fragments left, there's the problem of finding a related species in whose eggs you could do the insertion process.  Whether Gastric-brooding Frogs and Passenger Pigeons will return soon is a matter of conjecture, but it is nearly certain that seeing a Brontops stomping around in your garden is a far more remote possibility, one which may never be realized.

Then, of course, there are the inevitable ethical issues surrounding resurrecting extinct species.  The time of the Passenger Pigeon, for example, is long past -- when there were thousands of square miles of trackless forest in the eastern half of North America.  This bird only survived well in huge flocks (tens of thousands of individuals), which "darkened the skies when they flew over," according to accounts of people who saw them.  One, two, or even a couple of dozen of birds would be nothing more than a curiosity -- it would not be the same as truly reintroducing the species, a goal that is probably impossible due to the changes in the ecosystem.

But still, it's a fascinating idea.  For me, the coolness factor outweighs my ethical qualms, which probably isn't a good thing to admit.  Be that as it may, it is absolutely stunning how far science has come since the last Passenger Pigeon closed her eyes in death in 1914.  The ways in which the world has changed are far deeper, and more meaningful, than the visible alterations in the landscape.  And it looks like very soon, one of the laws we thought was an absolute -- extinction is forever -- may be overturned.
Posted by Gordon Bonnet at 5:07 AM