It's been a busy week,  here at Worldwide Wacko Watch.  I and my investigative team (made up of my two highly-trained dogs, Doolin and Grendel) have dug up some wonderful stories that will hopefully not make you lose complete faith in the intelligence of the human race.

First, from Indonesia, we have word that there is a law being drafted that will make black magic illegal.  Not only will casting spells and harming someone be punishable by jail time, even claiming to be able to do so will be considered a criminal offense.  Khatibul Umam Wiranu, an MP from the Democrat Party, believes that these measures are necessary to protect the populace from evil magicians.  But, he cautions, any charges of witchcraft filed should be "based on fact finding, not [just] on someone's statement."

Well, that should at least make it less likely anyone's going to be arrested.

Other proposed changes to the penal code include increasing jail time for such crimes as having sex with someone you're not married to.

The best part?  Proponents of the new laws are calling this a push to "modernize" Indonesia's out-of-date criminal code, which was last revised in 1918.  Because worrying about who's getting laid by whom, and claiming that the creepy-looking old lady down the street is a witch, is so 21st century.


Go a few hundred miles north into China, and we find our second story, which is a "beauty treatment" called "huǒ liáo" that involves setting your face on fire.  [Source]

I thought that mooshing charcoal paste and nightingale poop extract on your skin was the dumbest beauty treatment I'd ever heard, but this one takes the prize.  Huǒ liáo consists of soaking a towel in alcohol and a "secret elixir," and the practitioner putting it on your face or other "problem area" and then setting it ablaze.  The practitioner is supposed to quickly smother the fire with another towel.  Don't believe me?  Here's a picture of someone having the treatment: 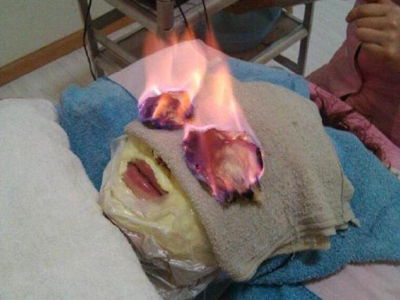 Nope, I see nothing at all that could possibly go wrong with that.

When asked about the treatment, a doctor who specializes in "natural cures," Dr. Jacob Teitelbaum, said, "While alcohol will help carry whatever is in the elixir into the body, it's not really necessary to light it on fire.  However, one explanation is that extreme heat triggers an adrenaline response which can shift your body's chemistry, improving some symptoms like indigestion and slow metabolism."

You know, if I want an adrenaline rush, I'll just go ziplining or ride a roller coaster.  Anyone who needs to set his/her face on fire in order to get an "adrenaline response" has other problems besides dull skin.


Next, we have a story in from Spain that someone has discovered a carving in some stonework in a cathedral that dates from the 12th century that depicts...

The carving, which apparently shows a guy in an Apollo-program-style space suit, is on the Cathedral of Salamanca.  Want to take a look?  Here you go: 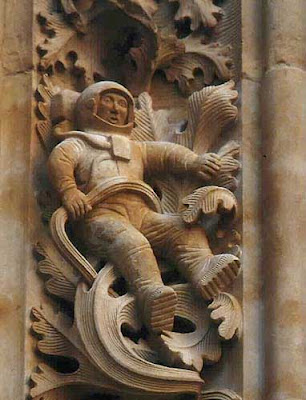 Of course, this has given multiple orgasms to the whole "ancient astronauts" crew, the ones who think that Chariots of the Gods is Holy Writ, who think the pyramids were built by aliens, and so on.  The only problem is, the cathedral was renovated in 1992, and this stonework was clearly added then by an artist with a sense of humor.  In fact, Snopes.com has a page on this claim, and they even found an article in a Portuguese newspaper that described the figure:


The renovation of the Cathedral of Salamanca in 1992 integrated modern and contemporary motifs, including a carved figure of an astronaut.  The use of this motif was in the tradition of cathedral builders and restorers including contemporary motifs among older ones as a way of signing their works.  The person responsible for the restoration, Jeronimo Garcia, chose an astronaut as the symbol of the twentieth century.

Well, that sounds pretty unequivocal, doesn't it?  Unfortunately, this hasn't convinced anyone except the people who were already skeptical, and all it's done is hooked up the Ancient Astronauts crew with the Conspiracy Theories crew, and now we have claims that the Spanish (and/or Portuguese) governments are covering up the evidence of ancient alien invasion, for god alone knows what reason.


In any case, this brings us to our last story, which is about a petition that is currently out there to save planet Earth from an extraterrestrial attack.  How, exactly, signing a petition is going to help, I don't know.  Maybe when the aliens get here, and are on the verge of blowing us to smithereens with their laser cannons, we can shout, "No!  You can't do that!  WE HAVE A PETITION!"  Maybe the idea is that if enough people sign it, governments will for god's sake do something, such as to deploy a protective shield around the Earth in the fashion of the historical documentary Men in Black III.  I dunno.

In any case, the petition has currently garnered a whole fourteen signatures.  They're shooting for 100,000.  You can sign if you want to.  Me, I probably won't.  My general feeling is that any species that modernizes laws by outlawing witchcraft and premarital sex, and considers setting your face on fire a beauty treatment, deserves everything it gets.
Posted by Gordon Bonnet at 4:34 AM