You put the water in the water, and drink it all up...

Let me just say, right up front, that I love my students.

They never fail to give me some optimism for humanity's future.  It's true that they sometimes come pre-installed with silly ideas; but I find that the vast majority of them are curious, interested in the world around them, and enjoy being challenged.  Given the opportunity to learn some of the skills of critical thinking, they rise, and often exceed, the target.

One student on the hope-for-the-future list is a young man I just met this year who has already supplied me with a number of topics for this blog, putting him in the running for the winner of the Junior Skeptophile Award for 2013.  His latest was one that I actually thought was satire for a while -- Poe's Law once again biting us in the ass.  But sadly, no, this one is real, which will shock you when you find out what it is.

I'm just going to give you a moment to ponder that one, okay?

Are you thinking, "Wait.  That can't mean what it seems to mean."  But yes, it does.  These people are taking water... and then diluting it a bunch of times, with water.  And of course, being that this is homeopathy we're talking about, the more you dilute the water with water, the stronger the water gets.  This water is diluted to "30c" -- which is homeopathic parlance for one part water in 10 to the 30th power parts, um, water.

That's some strong water, friends.  As a coworker of mine commented, "I'll bet it's really good at curing dehydration."

(Look, I'm not claiming this isn't ridiculous.  Don't yell at me.) 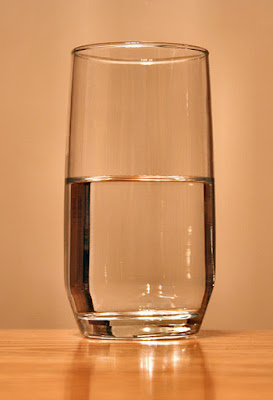 [image courtesy of photographer Derek Jensen and the Wikimedia Commons]

Anyway, here's the catch: the water they're diluting is "new water," i.e., just formed from hydrogen and oxygen gas.  You dilute the new water with old water, and so on and so forth.  There's a whole page devoted to the "proving" of this "remedy."  Now, I always want to make sure that I'm being accurate myself, so just to be sure that I understood it, I looked up "proving" on the "Homeopathic Terms" page of HealingWithHomeopathy.net, and I found the following definition:

Which, as a definition, kind of sucks.  It's as if you defined "physics" as "a body of practice engaged in by physicists, mostly done since the 17th century, following a specific set of rules and standard protocols.  That's all you need to know."

Well, I wanted more than that, so I went to the wonderful site The Skeptic's Dictionary, and found on their page for homeopathy the following:


Hahnemann [the founder of homeopathy] experimented on himself with various drugs over several years and concluded that "a doctor should use only those remedies which would have the power to create, in a healthy body, symptoms similar to those that might be seen in the sick person being treated" (Williams, Guy R. The Age of Miracles: Medicine and Surgery in the Nineteenth Century (Academy Chicago Publishers 1981).)... (He) called this method of finding what symptoms a drug caused in a healthy person a "proving."


I have felt invisible over the last few days, and with one particular person, it was as though I hadn't existed as she hadn't thought of me. People didn't register my presence.

Feel very light headed as though the top of my head, from the eyes upward, has dissolved and I am merging into the atmosphere.

Can't stop drawing spirals while taking notes. I concentrate better if I draw those spirals.

I had this strange feeling of being a bird with a large beak. My nose felt as if it coming outward and down to meet my chin, which was also coming outward and up. My face felt contorted. My tongue was being squeezed into a very small space.

Twitch in left eye, underneath, lasts about 2 hours.

The end of my nose is in spasm, intermittently through out the day.

So.  I guess now we know what water diluted with water is useful for.  And in case you're wondering what other treatments are out there, there's a page called "Provings" linked on their website (link provided above) that tells you about other "remedies" these folks have worked on.  These include "30c" dilutions of:
And no, I don't think they're joking.

So, anyway, I think we can all agree that my student has found quite a treasure-trove of facepalming material, here.  But to return to the hopeful note of my opening paragraphs, keep in mind that these young people who, over and over, demonstrate to me that they are capable of high-level critical thinking -- those are our future.  With minds like this leaping forward into adulthood, I think we have every reason to be optimistic.  Wouldn't it be nice if one day, I can retire from this blog, because I've run out of topics, and this sort of superstitious hocus-pocus is a thing of the past?

I, for one, wouldn't mind that as an outcome, at all.
Posted by Gordon Bonnet at 2:45 AM