After having dealt, in the last few days, with problems with the oversight of public education, the ongoing effort to force the teaching of Intelligent Design in biology classrooms, and the attitudes of the religious toward atheists, it's time to turn to a much more pressing issue, to wit: Do dogs have chakras?

Chakras, you may know, are "energy flow centers" in your body, and are connected with the "meridians" that are the basis of a lot of alt-med modalities, including acupuncture, reflexology, and tapping.  The idea, apparently, is that human diseases are caused by having clogged chakras.

The Skeptic's Dictionary says about chakras, "According to kundalini yoga, a chakra (pronounced chuckrah and meaning wheel or circle in Sanskrit) is a center of prana or energy. It is said that there are several of these that begin at the base of the spine and end at the top of the head... The alleged energy of the chakras is not scientifically measurable, though some have tried to connect the chakras with physical organs such as the pineal gland and the thymus."  The wonderful site Skeptics South Australia is blunter still: "The fact that, even amongst so-called ‘chakra experts’ there are so many different opinions as to their numbers, and locations, strongly suggests that chakras exist only in the imagination of believers, that they are nothing more than a metaphysical belief that has no substance in reality."

Now, of course, we should never let a little matter like whether something actually exists stop us from blathering on about how it might manifest in other species.  Which brings us to an inadvertently hilarious article on the site The Blissful Dog called, "Dogs Have Chakras, Too!"


The chakras can have various levels of activity. When they’re open, balanced or aligned the Chakras are considered working as they should. Ideally, all chakras would be balanced. Instincts would work with our feelings and thinking. However, this is usually not the case. Some chakras are not open enough (being under-active), and to compensate, other chakras are over-active. The ideal state is where the chakras are completely balanced. This is as true for your dogs as it is for you! Especially since they pick up and take on so many of our emotions.

Mostly what my dogs seem to pick up is dropped food, but maybe that's just because their TableScraps Chakra is over-active.

Then we hear about how despite Skeptics South Australia's pointing out that hardly anyone agrees about where these mysterious (i.e. nonexistent) forces reside, everyone really agrees, especially with regards to dogs:


Most agree that there are seven major Chakras and for simplicity’s sake, we will work with that system for now for our dogs. I do feel that additional Chakras are located in their paws, tails (or tail area) and in their noses, in my humble opinion and will share information as I gather it. 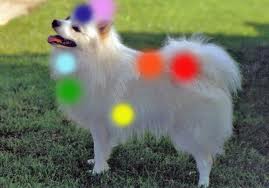 One specific example will suffice, but I strongly recommend that you go to the website and read them all.  I will not be responsible for damage to your computer screen if you are drinking anything while you do so:


Third Eye Chakra – Color: Indigo Stone/Crystal: Sapphire, tourmaline, sapphire, sodalite, azurite and clear quartz. The Third Eye chakra is about insight and visualisation. When it is open and balanced, your dog will be intuitive and well balanced between the world of people and that of dogs. If it is under-active, your dog will not be not very good at thinking for herself, and you [sic] may tend to rely on you too much and might even get confused easily.

This clearly sounds like the problem with my dog Grendel, who is very well-meaning but who seems to have about three active synapses in his brain, two of which are devoted to the concept of "Let's play tug-of-war with this rope toy."  He is a very sweet dog, but his facial expression can best be summed up by the word, "Derp?"  I guess I'd better balance his Third Eye using sapphire, or something.

So, the important question is: what do you do for your dog if his chakras are unbalanced?  Turns out it's simple:


Your dog may fit some of the patterns discussed above and you want your beloved one to be BALANCED! There are a few things you can do quite easily… You can also spend more time alone, in a quiet space with your dog. Pet them, even a brief massage and just concentrate on THEM for 10-15 minutes a day. This can be pretty miraculous in itself…the intention is the focus, isn’t it?

Well, I'm sure that both my dogs would be completely in favor of that.  Petting could happen for 24 hours a day, and they would both still be of the opinion that it was Insufficient To Meet Their Needs.

But this all raises a more important question: if dogs have chakras (The Blissful Dog says, "... why not?  They are energetic beings!"), do other animals?  Does a cockroach have chakras?  How about a tapeworm?  Or a jellyfish?  Doing acupuncture on a jellyfish sounds downright messy.  What about possums?  I'll be damned if I'll give a possum a massage.  Those things creep me right the hell out.  They're just going to have to continue to waddle around the back yard with misaligned meridians.

So, anyhow, the bottom line is: spend more time petting your dog.  This is actually good advice, even if you take the whole chakra thing out of it.  I know when I have a hard day, it always makes me feel better to sit on the floor and snuggle with Grendel for a while.  And it always warms my heart when, after I've spent some time scratching his ears, he looks up at me with a searching expression in his big brown eyes, as if to say, "Hey, rope-toy?  Whatcha think, huh?  Derp?"
Posted by Gordon Bonnet at 3:01 AM