The Black Death, aliens, and the role of chaos in history

Yesterday's post, about the alien origins of humanity, generated a nice round of "you think that's a crazy belief, wait till you see this one!" from my readers.  The best contender in this game of Wingnut One-Upmanship came from another student, who found out that not only did aliens produce our species, they've been trying to kill us ever since.

I guess it's understandable, really.  Our stewardship of the globe hasn't exactly been praiseworthy.  It's no wonder that our superpowerful alien cousins, who still presumably live on our original homeworld (with its clement temperatures, 30-hour rotational period, and "no geomagnetic storms or glaciers"), would have some second thoughts about sending us here.  So it turns out that they've repeatedly tried to get rid of us.

This conclusion comes from a stellar piece of research entitled "Did Aliens Create the 'Black Death' and Other Diseases During the Middle Ages?  (And Are They Still Creating Diseases Today?)," which not only would win an award for the longest article title ever, but is yet another example of a piece of journalism that should say, in its entirety, "NO."  Unfortunately, the author doesn't take that route.  We're told that the 14th century plague has to be extraterrestrial in origin:


A great many people throughout Europe and other plague-stricken regions of the world were reporting that outbreaks of the plague were caused by foul-smelling “mists” and bright lights were reported far more frequently and in many more locations than were rodent infestations. The plague years were, in fact, a period of heavy UFO activity.

Well, I hate to be unimaginative, but the foul smells during the Middle Ages don't really require UFOs to explain them.  There was a fairly appalling lack of sanitation, particularly in the big cities.  Apparently just the amount of human waste lying around in heavily populated areas was enough to create a smell that would blow your hair back -- even 19th century London was a frightful-smelling place, according to Steven Johnson's wonderful book The Ghost Map (which chronicles the cholera epidemic of the 1850s, and how it led to the creation of an efficient city-wide sewer system).  And the fact that rodents weren't "reported frequently" is pretty certainly because of their ubiquity, not because they were absent.

But of course, it's not just the stinky mist and bright lights that are brought out as evidence:


A second phenomenon was sometimes reported: the appearance of frightening human-like figures dressed in black. Those figures were often seen on the outskirts of a town or village and their presence would signal the outbreak of an epidemic almost immediately. It appears that the “scythes” may have been long instruments designed to spray poison or germ-laden gas. Strange men dressed in black, “demons’ and other terrifying figures were observed in other European communities. The frightening creatures were often observed carrying long “brooms,” “scythes,” or “swords” that were used to “sweep” or “knock” on the doors of people’s homes. The inhabitants of those homes fell ill with plague afterwards. It is from these reports that people created the popular image of “Death” as a skeleton or demon carrying a scythe. In looking at this haunting image of death, we may, in fact, be staring into the face of the UFO.”

Right.  Because we're not talking about a superstitious, credulous bunch of people here.  They can't possibly have made this up to explain a terrifying event that they didn't have the science to understand. 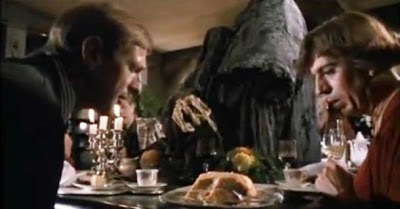 Maybe it wasn't rats or aliens.  Maybe it was the "saaaalmon mooouuussse."


This Awareness indicates that what in Medieval times were termed demons, and what many of the Christian faith considered to be demons, are in fact what entities refer today to as extraterrestrial aliens. The Greys from Zeta Reticuli today are not precisely the same invaders as those of the Medieval times. The Medieval aliens were both Reptoid and also of the Grey community that now is underground and known as the Deros. The Deros underground are demented forms of Zeta Greys, which have been here for many thousands of years, living underground to avoid sunlight and to avoid communication with humans except on those occasions where they seek to make contact for one reason or another.

Oh.  Okay.  Because that makes sense.

You know, I think that the problem here is that people are uncomfortable with the chaotic, random nature of much of life, especially the bad parts.  If something bad happens, the immediate impulse is to look for someone, or something, to blame.  This explains so much woo-woo thinking, doesn't it?  Without even trying hard, I found three examples that were linked on Reddit in the last two days -- an article on the website of the Institute for Natural Healing that attributes all cancer to eating meat, a claim that the government is covering up how dangerous vaccines are, and an allegation that WiFi in schools is causing headaches in children.

Somehow, we just can't accept that people get sick, sometimes for no obvious reason.  It's not enough to celebrate the astonishing advances in medical science over the last hundred years, that have generated new records in the healthy human life span -- because, unfortunately, they haven't eliminated all disease and suffering.  The fact that we still get sick, we still grow old and die, must mean that there is some insidious plan behind it all.

It can't just be that we live in a world that's kind of a rough place, a world where bad things happen sometimes.  Not even in the case of the Black Death, where we (1) have identified the bacterium that causes it, (2) know the vector that transmitted it, (3) have evidence from medical records of the time that the symptoms are consistent with subsequent outbreaks, and even (4) have tissue samples (bones) that show evidence of Yersinia pestis infection.  No, that's not enough.  It has to be the evil demented aliens causing it all.

Anyhow, however understandable it is to want there to be some kind of overarching reason why stuff happens, rationality forces us to concede the role that chaos has in human history.  No extraterrestrial epidemics necessary.

And in case any of you were considering trying to one-up this story, I have to request, with all due respect: if you know of anything loonier than this claim, you probably shouldn't tell me about it.  I've done enough facepalms over this one to last me a while.
Posted by Gordon Bonnet at 2:56 AM