Water-tight compartments in the brain

Today's topic is compartmentalization, a psychological phenomenon that is defined thus:


Compartmentalization is an unconscious psychological defense mechanism used to avoid cognitive dissonance, or the mental discomfort and anxiety caused by a person's having conflicting values, cognitions, emotions, beliefs, etc. within themselves.

Compartmentalization allows these conflicting ideas to co-exist by inhibiting direct or explicit acknowledgement and interaction between separate compartmentalized self states.  [Source]

While I'm sure that we all engage in this defense mechanism to one extent or another, in more extreme cases it does result in stances that (from the outside) look completely ludicrous.  It explains, for example, two of my former students, both brilliantly successful in my AP Biology class, both of whom were Young-Earth Creationists.  One of them, when I asked how she could accept the rest of science and reject evolutionary biology, answered -- without any apparent rancor -- that the rest of science was just fine, and she believed it to be true, but when science and Christianity conflict then the science has to be wrong, because she knew that the bible is true.  The other student seemed more conflicted about the whole thing, but ended up with basically the same solution.

One of these students, by the way, is now a medical doctor, and the other an environmental lawyer.

The whole subject of compartmentalization is on my mind today because of something that President Obama said this week with regard to climate change.  In a speech given at Georgetown University (excerpted and reviewed here), Obama stated that the United States needs to develop and implement a comprehensive plan to manage anthropogenic climate change, and outlined steps that he believes would accomplish what needs to be done.  About climate change deniers, he had the following to say: "I am willing to work with anybody…to combat this threat on behalf of our kids.  But I don't have much patience for anybody who argues the problem is not real.  We don't have time for a meeting of the Flat-Earth Society.  Sticking your head in the sand might make you feel safer, but it’s not going to protect you from the coming storm."

Which is a pretty good line... but, unfortunately, generated a response from the Daniel Shenton, president of the Flat-Earth Society, who said that actually, he believes in anthropogenic climate change.

"I accept that climate change is a process which has been ongoing since beginning of detectable history, but there seems to be a definite correlation between the recent increase in world-wide temperatures and man’s entry into the industrial age," Shenton said, in an email to Salon.  "If it’s a coincidence, it’s quite a remarkable one. We may have experienced a temperature increase even without our use of fossil fuels since the Industrial Revolution, but I doubt it would be as dramatic as what we’re seeing now."

To which I can only respond: but you think the Earth is flat?  What the hell?

I mean, I've seen compartmentalized brains before, but Shenton may win the prize.

Not only does Shenton believe that the Earth is flat, but he believes that:


1)  Photographs from satellites are "digitally manipulated."  Why scientists are so desperate to convince people that the Earth is a sphere isn't certain, but they sure seem determined.  They're an evil bunch, those scientists.

2) The view of the Earth from space by the astronauts is explained by the fact that the space program is a lie, neatly tying up this nonsense with the Moon-landing-is-faked conspiracy theory nonsense.

3)  The seasons are caused because the Sun moves in circles over the North Pole (the center of the disk) and "shines down like a spotlight."  (Hey, don't yell at me.  I don't believe this stuff, I'm just telling you about it.)

4)  The Earth's gravity is created because the flat disk of the Earth is accelerating upwards at 9.8 m/s^2.  This acceleration, while it would create an apparent gravitational pull (consistent with Einstein's General Theory of Relativity), has as its cause a mysterious "aetheric wind."  Put a different way, they are making shit up. 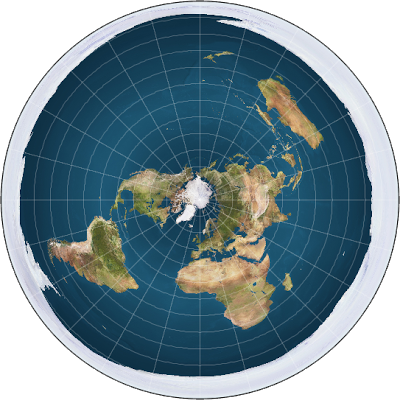 Oh, but the rest of science is just fine, and we have no problem with accepting anthropogenic climate change.

I wish I was joking, here.  But these people, hard though this may be to believe, are completely serious.

The problem is, once you have your brain this compartmentalized, you become impossible to argue with.  Just like my long-ago student, anything that brings up an internal contradiction or logical flaw is immediately dismissed as simply wrong.  It's like the old joke, strikingly relevant here, about the man who thought that the Earth was a flat disk resting on the back of a giant turtle.

"What is the turtle standing on?" asked a friend.

"Another turtle," the man said.

"But what is that turtle standing on?" the friend persisted.

I live in hope that one day, the water-tight compartments will begin to leak -- and that the resulting cognitive dissonance will require these folks to reevaluate their position.  But unfortunately, rationalism doesn't always win -- not with evolution, not with climate change, and not even with the Earth being an oblate spheroid.
Posted by Gordon Bonnet at 3:58 AM