I'd like to say, for the record, that it would be a nice thing if I felt confidence that the people elected to public office in the United States were smarter than I am.

Isn't that a good thing to wish for?  I know I don't have what it takes to be in congress, or (heaven forfend) to be the president.  The number of disparate fields that you have to be conversant with in order to be effective, the degree to which you have to understand the government, law, foreign policy -- I'm overwhelmed just thinking about it.

It is, therefore, a little terrifying to me when I see people in leadership roles in our government who seem to be kind of... dumb.

I don't make this statement lightly, and it's not just on the basis of the fact that I might disagree with some of them.  I would expect that, considering the complexity of what they deal with.  But when someone in government, an elected official that a majority of voters thought the best person for the job, makes a statement that is pure, unadulterated idiocy -- that I find alarming.

Take the pronouncement that came from Representative Jeff Miller (R-FL) this week, regarding an increasingly hot-button issue -- climate change. 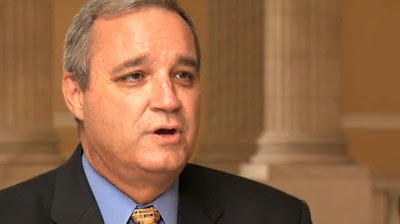 During a "Coffee With a Congressman" event held on Tuesday, Miller was confronted by some residents of the district he represents, and asked to defend his views on the environment.  Miller railed against the people who are in favor of tougher environmental safety standards as follows:


There are people who want to shut down that entire facility [a factory in his district].  The president wants to shut down all coal facilities.  He wants to bankrupt the entire state of West Virginia, and Pennsylvania, too...  All these people who drive electric cars around, talk about how great they are, forget that when you plug that thing into the wall, it's getting its electricity from a power plant somewhere, and it probably is a coal plant.

Well, so far, okay; maybe he got a little carried away when he claimed that the president wants to bankrupt two entire states, but he's got a point that unless we clean up electrical production at the source, electric cars are just one step away from producing the pollution ourselves.  But then he goes right off the deep end:


Lemme tell you, this whole Al Gore thing of climate change, unfortunately, it's not doing this nation any good...  The scientific community is not at consensus with this... I will defund the EPA, it has done more to slow the growth of industry than any agency out there...  You ask, why do I go against the scientists?  Well, I have scientists that I rely on, the scientists that I rely on say our climate has changed [sic].  Look, it wasn’t just a few years ago, what was the problem that existed?  It wasn’t global warming, we were gonna all be an ice cube.  We’re not ice cubes.  Our climate will continue to change because of the way God formed the Earth.

Look, I know that there are still questions about climate change.  We don't know to what extent the current warmup is a natural rebound, and to what extent it is anthropogenic in origin -- although the vast majority of climatologists attribute the rapid rate of warming to anthropogenic causes.  We don't know how far it will continue, or how much we could slow it down if we cut back on fossil fuel use.  We can still discuss those issues, as well as discussing what, if any, response our government should have toward them.

But to have someone like this guy, behind the microphone, and clearly babbling incoherently... about "ice cubes?"  And the "scientific community not being at consensus?"  And that he consulted "scientists he relies on" and they say the climate is changing because of god?  I don't know about you, I sure as hell don't want the decisions regarding the welfare of this nation made by people who seem to have trouble stringing words together into sentences, and whose understanding of scientific principles apparently leveled out in fourth grade on a visit to the Creation Museum.

Like I said, it's not that I think being a congressperson would be easy.  It's not a job that I would ever want.  But at least I am honest enough to admit it when I don't know something.  I guess that's taboo in politics, though, isn't it?  You can't ever say, "I'm sorry, I don't know about that."  But is it really any better to stand in front of a large, increasingly surly crowd, yammering on about climate change happening because god wants it to?

And regarding climate change, it's an answer we'd better get right, because as a friend of mine put it, it's an experiment we only get to run once.  Getting it right will mean having people in charge who have some basic knowledge of the science involved.  Not, unfortunately, talking heads like Representative Miller, who frankly sounds to me as if his IQ doesn't exceed his shoe size.
Posted by Gordon Bonnet at 2:08 AM