Following on the heels of my post yesterday regarding how much smarter and saner the conspiracy theorists are than us skeptics, today we will take a look at: homeopathic anti-chemtrail spray. 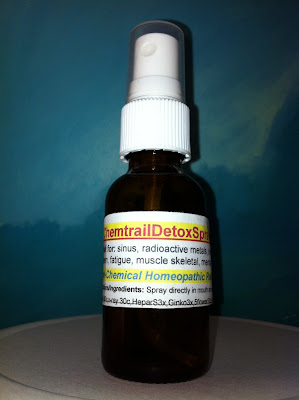 Yes, folks, guaranteed to "alleviate symptoms of chemtrail exposure," this homeopathic preparation (i.e. a bottle of water) is to be sprayed up the nose "until symptoms disappear."

At first, I thought this had to be a joke.  Or, at least, unique.  Surely no one else would come up with the idea of using worthless remedies for nonexistent chemtrail exposure.

Check out, for example, ChemBuster.  The website starts out by asking a very important question, namely: "Have you experienced symptoms of unknown origin?"  Because if you had "chronic fatigue," "chronic pain," "chronic headaches," or "mental and emotional problems," there could only be one answer:

The government is putting chemicals into jet fuel, so that when the jet fuel is burned, the chemicals are dispersed over the unsuspecting citizenry, where they are inhaled and cause you to feel crummy.

So who you gonna call?  ChemBuster!


ChemBuster contains 4 herbals and 9 homeopathics blended in a proprietary process designed to defeat, to annihilate, the pools of mycoplasma, heavy metals, respiratory problems and even mental problems associated with Chemtrail poisoning.

But ChemBuster has to be "activated" before use.  How do you activate it?  By purchasing an "orgone energy generator," setting the bottle next to it, and turning it on, which will "potentiate" it, increasing its strength by a factor of ten (following the mathematical principle that 10 x 0 = 0).

At this point, I should mention that the "orgone energy generator" uses the power of gemstones to "collect, concentrate, transmute and radiate all ambient subtle energy into life force," and that the person who came up with the idea of "orgone," Wilhelm Reich, believed that it was the "life energy" that was released suddenly during an orgasm.  I'm not making this up, by the way.  So here we have a claim that combines four ridiculous ideas -- homeopathy + chemtrails + gemstone energies + orgone.

Which may be a new record.

Now, if you don't want to buy homeopathic remedies and orgone energy generators to combat chemtrails, there could be a cheaper solution, namely: a spray bottle filled with vinegar.  Once again, I feel obliged to state outright that I'm not making this up.  Last year, we had a claim going around that was given some momentum by such pinnacles of rationality as Alex Jones and Jeff Rense, stating that if you were worried about the government dousing you with chemicals, all you had to do to "cleanse the air" was to spray some vinegar up toward the sky.  So people did it, because of course there never is an idea so completely idiotic that there won't be large quantities of people who will believe it.  Here is one explanation, if I can dignify it with that word (spelling and grammar as written, because you can only write "sic" so many times):


Vinegar does a lot as a support to our orgone devices. Why ? Reason is pretty simple:

It is all about the electrical charge of the atmosphere. Fellow gifters all around the world were trying to figure out how it is possible, that such cheap and funky substance, as vinegar, is delivering such spectacular effects on the chemtrail-rich atmosphere. Here is the simple explanation:

During the chemtrail attack, atmosphere is charged with a lots of positive ionts. Well, and dispersed vinegar is charging the atmosphere with negative ionts.

TRY IT YOURSELF. If you see the chemtrail attack in your sector is going on -  buy a liter or two of the vinegar, and disperse it on the asphalt surface of the road (it is the best platform for the vinegar to go up to the sky). Or throw black T-Shirt into the vinegar and leave it on the sunlight.

Vinegar begins AT ONCE to vapor to the sky, and sky is getting charged with the negative ionts by very aggresive chain reaction. Within maximally ONE HOUR you will get the results.

Yup.  Using a "funky substance" to fight "positive ionts" from "chemtrail attack in your sector."  Gotcha.

And lest you think that this explanation was immediately laughed into oblivion, I read the comments, without even putting on my anti-stupidity protective eyewear, and immediately came across one that read, "The idea of countering thousand dollars of chemtrail with cheap vinegar is very apealing [sic].  I'll try it. Must be very humiliating to them."

Ah, yes, them.  Those evil guys who are chemtrailing the hell out of us.  You know, I think that's the thing I understand the least about all of this; if the Illuminati in the government are dousing the skies with chemicals via jet contrails, and those contrails can be seen every day from damn near any spot in the United States, why don't we see all of the government employees walking around wearing big ol' respirators?  No, they're breathing the same air that we unsuspecting sheeple are.  So are the families of the government employees.  Everyone, pretty much, is breathing the same air, Illuminati and sheeple alike, and it seems that only the sheeple are affected?

Oh, wait, I forgot.  The government employees are Reptilian aliens, and they're immune.  Duh.

So, there you have it.  Using homeopathy, crystals, orgasmic energy, and vinegar to fight the chemtrails created by the llluminati.  I really think they should find a way to work in astrology, chakras, and the planet Nibiru, which would create a perfect storm of woo-woo quantum psychic vibrations, raising us to the next level of enlightenment.

On the other hand, I'm probably not ready for that.  Just let me stay unenlightened for the time being, at least until I recover from the forehead bruises I got from all of the headdesks I did while researching this post.
Posted by Gordon Bonnet at 3:25 AM