How not to administer First Aid

In the latest from the Now I've Seen Everything department, Amazon is offering a new item for sale: A Homeopathic Emergency First Aid Kit. 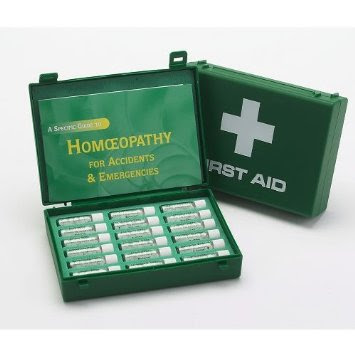 My first thought was to wonder how you could provide "homeopathic first aid," given that homeopathy rests on the idea that to prepare a "remedy," you take a sample of whatever it is that creates the same symptoms you have, and dilute it until there's none left.  How do you do that, for first aid situations?  If you accidentally smash your thumb with a hammer, do you stick the hammer in a container of water and shake it up, serial dilute the water with more water, and drink the result?

This would be even more difficult if you'd been, for example, hit by a car.

But the advertisement lists the remedies included, and unfortunately, there is no Tincture of Hammer or Extract of Oldsmobile included.  The kit includes: Aconite, Arnica, Apis, Arsenicum, Belladonna, Bellis perennis, Bryonia, Calendula, Cantharis, Carbo veg, China, Gelsemium, Hypericum, Ignatia, Ipecac, Phosphorus, Pulsatilla, and Silica.  The latter to be used, undoubtedly, when you get cut by broken glass.

What amazes me, here, is how Amazon doesn't see that this is a liability lawsuit waiting to happen.  Suppose you're out camping, and someone in your family gets stung by a bee, and goes into anaphylactic shock.  Well, fear not!  The handy Homeopathic First-Aid Kit has "Apis," which is (I am not making this up) extremely dilute bees.  So you give the little pills to the bee sting victim, instead of doing what anyone with more than five working brain cells would do, which is to get the victim to a hospital where he could get an epi pen shot.

I think we can all predict how this little scenario will end.

But no, the homeopaths claim; it's all based in science!  We've done experiments!  And it works!  To which I respond: I'm sorry, but homeopathy is only slightly more scientific than the "Four Humors" model of human physiology, which claimed that (for example) the best way to cure a fever was to remove a pint or two of the patient's blood.

Curiosity being what it is, however, I did look up "Apis" on the site "ABCHomeopathy," and I found that taking Apis is supposed to "act especially on outer parts, skin, coatings of inner organs, serous membranes.  It produces serous inflammation with effusion, membranes of brain, heart, pleuritic effusion, etc.  Extreme sensitiveness to touch and general soreness is marked."  If, actually, that was something you were trying for.  The list of conditions for which it is recommended is lengthy, and I will only mention a few of them that struck me as amusing:  "Stupor alternating with erotic mania;" "Jealous, fidgety, hard to please;" "Bores head into pillow and screams;" and "Feet too large."

Oh, and peritonitis.  Yes, you read that right.  This site recommends taking a sugar pill for peritonitis.

Speaking of asking for a lawsuit.

So, anyway, there you are.  You can buy your own homeopathic first-aid kit, if you have nothing better to do with $55, which in my opinion would include using it to start a campfire.  But to leave you on an upbeat note, I encourage you to watch this sketch from the British comedy show That Mitchell & Webb Look, wherein we get to see some actual use of "alternative medicine" in an emergency room.  Make sure to stick around to the end for a demonstration of how to make "homeopathic beer."  It'll cheer you up, even if you are "jealous, fidgety, and hard to please."