It is amazing to me, after all of these years of having a (rather guilty) fascination with cryptozoology, that I still can run into cryptids that I've never heard of.  This week, for example, I discovered two that were new to me -- one veritably in my own back yard.

The first came up because it's the 25th anniversary of its alleged appearance.  Back in 1988, farmers in Rhyader, Wales, began to report that their large animals -- especially sheep -- were being killed by "a single bite to the sternum."  One farm, owned by the Pugh family, lost over three dozen of its sheep to the attacker.

The article summarizing the events of a quarter-century ago states that the townspeople initially attributed the attacks to a "black panther."  This is somewhat amusing given that the only black panthers in Wales are in zoos, and if one went missing, the zookeeper would probably have noticed.  On the other hand, reports of giant marauding felines in Britain are common enough that the phenomenon has its own Wikipedia page, so I guess if we Yanks can have our Bigfoots, then the Brits can have their panthers. 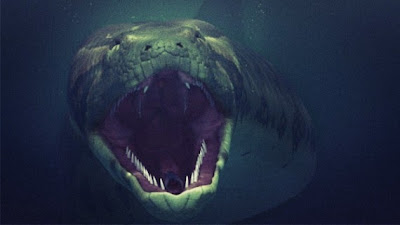 Not an actual photograph of the Beast of Rhyader

The author uses the term "Lovecraftian" to describe the beast, which is apt only in that it killed things.  Most of the creatures in Lovecraft's stories also sucked out their victims' souls, ate their faces, or converted them to puddles of sticky goo.  So I think we can say that the resemblance, if any, was purely coincidental.

In any case, the attacks suddenly ceased of their own accord in December of 1988, never to be repeated, and the mystery was never solved.


But if that's scary enough, little did I know that there was a similar beast only a few miles away from me.  In Cayuga Lake, a long, narrow glacial lake that's only five miles (as the crow flies) from my front door, there is a creature called "Old Greeny" that resembles the Beast of Rhyader in that (1) it's aquatic, (2) it's reptilian, and (3) it almost certainly doesn't exist.  But this last isn't going to stop the reports from coming in, one of them from an "unnamed resident of Lancaster County, Pennsylvania," who was visiting our fair region back in 2009, and had the following to say:


I’ve been face to face with Old Greeny; not more than 100 feet away from me as I stood on the northern shore of Lake Cayuga looking south across the lake; eight or nine years ago. It raised its triangular-tooth-filled jaws with aquatic plants hanging from it’s half-open mouth to break surface for only about three seconds before once again submerging. I will never forget that large, unblinking eye staring to the west at nothing in particular; never acknowledging my presence. Don’t let anyone tell you I saw a floating log or a beaver! I know I saw an animal that is not supposed to exist!  By what I observed I can tell you it was standing on the bottom when it raised its head for me to see; not swimming; but stationary! 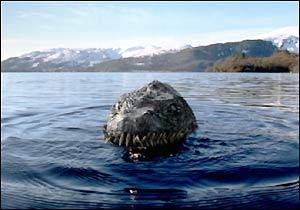 Not an actual photograph of Old Greeny

The same story reports that a local resident, one Steven Griffen, was bitten on the arm so hard by Old Greeny in 1974 that it broke his arm.  This might actually discourage me from swimming in Cayuga Lake if I was actually willing to swim in it in the first place, given that our climate is not exactly conducive to running around outside clad in nothing but swim trunks (this year, summer occurred on a Thursday).

But even so, I'll keep my eyes peeled when I'm down near the lake, and report back here if I see anything that is definitely not a beaver.

I'll also make sure that I'll listen for reports of local sheep being killed by "a single bite to the sternum."  That's gotta hurt, even if the attacker doesn't turn out to be "Lovecraftian."
Posted by Gordon Bonnet at 1:55 AM