Attack of the teenage exorcists

In previous posts I've described a lot of examples of Poe's Law -- a rule that states that it is impossible to tell the difference between a sufficiently well done satire and the real thing.  Today, I want to look at a different phenomenon -- the difficulty of determining when someone is making a claim because (s)he actually believes it to be true, or simply because it has the potential to generate a lot of money and notoriety.

It's the problem with psychics, isn't it?  Given the human capacity to lie convincingly, you can see that it would be difficult to determine if people like Psychic Sally Morgan sincerely believe that they can "see what's hidden," or if they are simply hoaxers and charlatans, in it to make money from the gullible.  (Note that even if the first is the case -- Morgan et al. actually do believe that they are psychic -- it has no relevance to the additional question of whether they are right.  There are lots of people who sincerely believe lots of things, and who are simply wrong or delusional.)

Which brings us to the trio of teenage exorcists who are currently embarked upon a quest to eliminate demons from England. 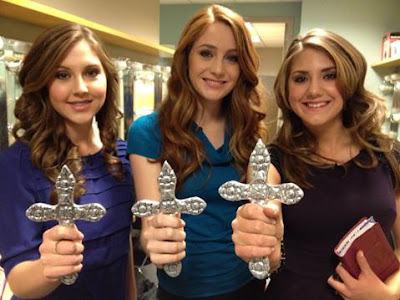 An upcoming documentary, filmed by Dan Murdoch and airing tomorrow on BBC3, chronicles the efforts of sisters Tess and Savannah Scherkenback and their friend Brynne Larson to exorcise the evil spirits that are currently troubling Great Britain.  These bad guys, the three say, were always kind of oozing around the place, but really gained a foothold recently...

... because of Harry Potter.

"It has been centuries in the making, but I believe it came to a pinnacle with the Harry Potter books," Savannah told reporters for The Daily Mail.  Her sister Tess agreed, adding, "The spells you are reading about are not made up.  They are real and come from witchcraft."

Funny, then, how when I shouted "Petrificus totalus!" at a student in my class who wouldn't stop talking, nothing happened.  Maybe the demon who is helping me was taking a nap, or something.

Be that as it may, these girls have gone all over the world with their dog-and-pony show, Casting Out Unclean Spirits and making Satan Get Thee Behind, um, Them, and raking in lots of money at each appearance.  It's clear that a lot of the audience members believe they're for real; there's the usual screaming and rolling-back-of-eyes and so on that accompanies exorcisms, followed by hallelujahs and praising of Jesus when the all-powerful Evil One is once again, surprisingly enough, vanquished.  But the question remains:  do the Weird Sisters themselves think that they're banishing demons -- or are they just charlatans who are in it for the money and publicity?

One thing that would argue for the former is that Brynne Larson is the daughter of Reverend Bob Larson, who is an evangelical wingnut of some proportion.  He's been around for a while; I remember listening to his radio program, Talk Back, in the 1980s when I lived in Seattle.  His major theme -- harped on in just about every single show -- was how the music industry was infested by demons, and how listening to rock-and-roll was going to endanger your soul.  He's written several books on the topic, including Rock & Roll: The Devil's Diversion, Hippies, Hindus, and Rock & Roll, Rock & the Church, and Rock, Practical Help for Those Who Listen to the Words and Don't like What They Hear, as well as the more general titles Larson's New Book of Cults and In The Name of Satan: How the Forces of Evil Work and What You Can Do to Defeat Them.  So it's pretty clear that Larson himself believes what he's saying, even though most of the rest of us think he should see a doctor about getting some antipsychotic meds. 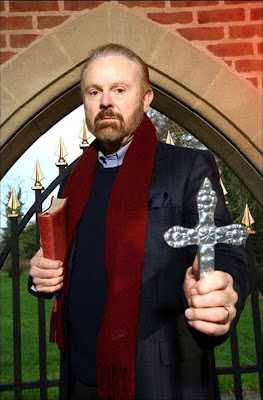 Actually, my most vivid memory of Larson's radio show is that he was notoriously slow on the five-second delay button when people would call up to harass him, which happened with clock-like regularity.  On one extremely memorable occasion, a woman called up, asked a couple of misleading questions about how to invite Jesus as her personal savior to get Larson off his guard, and then said, "I'm just curious to ask, Reverend, can god get it up?"

Larson, clearly not understanding, said, "I beg your pardon?"

She said, "Can god get it up?  You know?  Because after all, man was created in god's image, and my boyfriend has a hard-on pretty much constantly.  And god made the Virgin Mary pregnant, and all, so I was just wondering..."

Then followed a fifteen-minute rant about how the forces of Satan were constantly attacking him, and how evil and twisted and depraved they were, and how that woman must have been possessed by a devil to call him and say such a thing.  No mention was made about how his (human) tech crew should be doing a better job of screening his calls, which is the reaction I would have had.

My guess, about the teenage exorcists, is that they probably are at least nominal Christians, but that they know full well that what they're doing isn't real.  "Reality" is the last thing that "Reality TV" turns out to be, and I suspect that that this is no exception.  I also suspect that the British, who are in general considerably less religious than Americans, will simply roll their eyes at the documentary and then proceed to forget all about it.  And the trio will have to take their Malleus Maleficarum roadshow elsewhere.

I'm sure, however, that this isn't the last "documentary" of this sort that we'll see.  Because, after all, the exorcists aren't the only ones who are motivated by profit.  If Teenage Exorcists is successful in garnering anything approaching high ratings, it will probably be only the first of many such shows.

All of which makes me glad that we don't watch television.
Posted by Gordon Bonnet at 2:33 AM