When one of my loyal readers sent me an email asking if I'd heard about the alien microchip implanted in Napoleon's skull, I knew this was gonna be good.

I mean, you don't just combine the mortal remains of major historical figures with alien supertechnology, and not get something fantastic.

So I did a search for it, and man... well, let's just put it this way: I don't know how the hell I missed this one.  There were hits all over the place, a bunch of them just recently on conspiracy-type sites.  Here's a typical one, from earlier this year, courtesy of Bubblews, wherein we get the gist of the story:


While working on a grant from the French government to determine if a pituitary gland problem was the cause of Napoleon Bonaparte's small stature, one Dr. Andre DuBois claims to have discovered a half-inch long microchip implanted in the deceased ruler's skull...  DuBois suggests that, due to the bone growth around the chip, he believes it was implanted when he was very young.  Furthermore Dr. DuBois is quoted as saying, "Napoleon vanished from sight for a period of several days in July 1794, when he was 25.  He later claimed he’d been held prisoner during the Themidorian coup – but no record of that arrest exists.  I believe that is when the abduction took place."

So, we have a pretty amazing claim here, and a possible explanation for why Napoleon liked to stick his hand inside his shirt.  He was clearly adjusting the controls on bionic implants in his belly button. 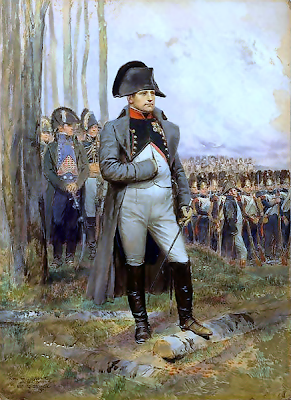 Anyhow, I started trying to backtrack, and figure out where the story originated.  I found an earlier version (September of 2011) that had more information:


Scientists examining the remains of Napoleon Bonaparte admit they are "deeply puzzled" by the discovery of a half-inch long microchip embedded in his skull.  They say the mysterious object could be an alien implant — suggesting that the French emperor was once abducted by a UFO!

"The possible ramifications of this discovery are almost too enormous to comprehend," declared Dr. Andre Dubois, who made the astonishing revelation in a French medical journal.  "Until now, every indication has been that victims of alien abduction are ordinary people who play no role in world events.  Now we have compelling evidence that extraterrestrials acted in the past to influence human history – and may continue to do so!"

Dr. Dubois made the amazing find while studying Napoleon’s exhumed skeleton on a $140,000 grant from the French government.

"I was hoping to learn whether he suffered from a pituitary disorder that contributed to his small stature," he explained.  But instead the researcher found something far more extraordinary: "As I examined the interior of the skull, my hand brushed across a tiny protrusion. “I then looked at the area under a magnifying glass – and was stunned to find that the object was some kind of super-advanced microchip."

Righty-o, then.  A doctor is given $140,000 by the French government to determine whether Napoleon, who was five-foot-seven, was a pituitary dwarf, and instead the doctor finds that the Emperor had an alien implant.

So, I tried to track it further back.  Both "Andre" and "Dubois" are common French names, so it was nearly impossible to narrow it down that way.  But I found a version of the story from 2010, and followed the lead from there, and ultimately it led back...

You'd think by this time I would just assume that this was the case.  After all, the same thing happened with the story of the alien burial site in Kigali, Rwanda, the story about how the Earth was about to be invaded by aliens from the planet Gootan, and the story about how there are glass pyramids under the Atlantic Ocean.  Apparently, there is an "all roads lead to Rome" rule about this phenomenon that goes something like, "all bullshit leads to The Weekly World News."

(By the way, for readers who check links -- the link I posted to The Weekly World News story on Napoleon is dated March of 2012, but that must have been an update or repost, because some of the comments on that link go back to 2009.  This really does appear to be the earliest iteration of the story available online.)

So, anyhow, there you have it: Napoleon is highly unlikely to have been an alien abductee.  A pity, really.  That sort of thing would make history class so much more interesting.  But I guess we'll just have to settle for the Peninsular War and the Battle of Leipzig, and try to make do with that.
Posted by Gordon Bonnet at 1:40 AM