One question I have for people who believe that there are powerful, invisible beings in control of the universe is why those beings don't seem to object more strenuously when they are disbelieved in or mocked outright.

I'm not just talking about deities here, as you'll see in a moment, although mythology does provide a great many examples of tales which, if true, should give scoffers pause.  The Greeks gods, in particular, were always smiting people for pretty much nothing.  Remember when Athena turned Arachne into a spider for claiming that she was the best weaver ever?  Or when King Salmoneus of Pylos was vaporized with a thunderbolt by Zeus when he claimed to be a god?  Then there was poor Actaeon, who was turned into a stag and then ripped limb from limb by his dogs just because he happened to catch a glimpse of the goddess Artemis naked. 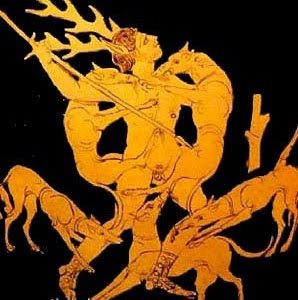 Looks from the picture like Actaeon was naked at the time, too, which certainly ups the creepiness factor and makes it understandable why Artemis freaked out a little.  But it still seems like an overreaction to me.

The Norse gods were a little better in that regard, although not if you were a Frost Giant.  Odin and Thor were always smiting the crap out of the Frost Giants, which is probably why you see so few Frost Giants around now.

And look at Yahweh in the Old Testament.  Given how many of his own followers he slew for various minor offenses, it's a wonder there are any of them left, either.  He killed seventy people just for looking at the Ark of the Covenant in 1 Samuel 6:19, bringing up visual images of the melting Nazis at the end of Raiders of the Lost Ark.  God also was not above using animals to do his dirty work -- remember how he sent bears to help out his pal Elisha in 2 Kings 2:23-24, and the bears ripped apart two dozen children who had teased Elisha about being bald? 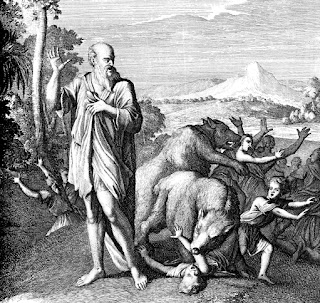 And let's not even go into how Yahweh killed virtually the entire population of the Earth during the Great Flood, men, women and children, just for some unspecified "wickedness."

So, we have some serious precedent, here, that being a non-believer, or (worse) an outright scoffer, isn't a safe thing to do, inviting being turned into or eaten by various animals, struck with lightning, drowned, or just suffering a generic smiting.

And here I sit, healthy as ever.  Odd, that.

All of this comes up, however, not because of anything connected directly with religion.  You probably know about the Reptilians, a race of shapeshifting evil cold-blooded aliens who have infiltrated the political world for nefarious reasons.  We're talking about some serious bad guys, here, worse even than Ann Coulter.

Now, belief in the Reptilians does share some of the same characteristics as religion, in that it requires faith-based acceptance of powerful entities whose existence, by definition, can't be proven.  So it is perhaps unsurprising that this week, on the wonderfully weird blog Phantoms & Monsters, we found out that like Zeus and Artemis and Yahweh and the rest, the Reptilians do not take kindly to being taunted.

A man who gave his name only as "Matt R." was interviewed a week ago with Daniel Ott of The Edge Radio Show, a weekly broadcast that bills itself as "exciting interviews on topics such as 9/11, Angels, Near Death Experiences, Planetary Anomalies, Black Ops, to Alternative Science, Prophesies, Lost Continents, Aliens, Cryptozoology, Bio Warfare and much more!"  Matt R. was describing his various abductions by Reptilians (he's apparently had more than one), and Ott made some kind of wisecrack about Reptilians.  Here's what happened next:


In the last 10 minutes of the show, the host cracked a joke about killing reptilians.  What can only be described as an inhuman growl jumped into our conversation immediately after.  Apparently, whatever reptilian was on the line wanted to voice their displeasure with his joke.  During this conversation, I was sitting inside a parked car with the engine off. I was talking on my Skype app, over my phone's 4G connection.  There was no other radio or computer anywhere near me.  I can't think of anything that could have produced a growling noise that vivid.  That certainly didn't sound like line interference.  There are no audio files or ring tones on my Samsung S3 that sound like that.  There was a deep guttural quality to it, which made it similar to what I've heard from reptilians before.  Mr. Ott does not have a history of pranking people on his program.  And I know there is no possible explanation for generation of that noise on my end.

And I'm thinking, "that's it?  A nasty growl is the best that the ultrapowerful, black-hearted controllers of the Earth can do?  After crossing the galaxy in their faster-than-light spaceships, infiltrating the government and replacing world leaders by assuming human form, and engaging in all sorts of evil stuff from genetic engineering of alien/human hybrids to inducing Miley Cyrus to "twerk" at the Video Music Awards, the best they can manage when someone threatens to kill them is a 'guttural growl?'"

Maybe that's why supernatural entities get so little respect these days.  I mean, if a god appeared in my classroom and turned a mouthy student into an earthworm, I would definitely stand up and take notice.  Depending on who the student was, I might even sacrifice a sheep or something as a way of saying, "Thanks."  And just think of all of the people in the world who really deserve being vaporized by lightning bolts.

If Thor is up there with his hammer, I know we'd all appreciate it if he'd get up off his lazy ass and use the thing, preferably starting with someone like Bashar al-Assad.

But of course, that sort of thing never happens.  It's kind of inconvenient, the way we never get any direct evidence of all of these things we're supposed to believe in, isn't it?  I mean, I've scoffed at both Reptilians and various religious beliefs pretty much continuously for two decades, and I haven't even heard so much as a growl.

Of course, you never know what's around the corner, so it could be that I'll get struck by a meteorite or something on the way to work today.

If that happens, won't I feel silly?
Posted by Gordon Bonnet at 2:10 AM