Sylphs to the rescue!

So, I have good news for those of you who are afraid of chemtrails.

I've posted more than once recently about the increasingly widespread claim that the government is lacing jet fuel with a variety of bad stuff, so that when the fuel goes through the engine, the bad stuff comes out in the exhaust and then settles out on us unsuspecting sheeple.  Some bad stuff that is supposedly thus dispersed:
If you are asking yourself how any of these things could (1) survive the combustion process in the engine, and be (2) in sufficiently high concentrations afterwards even to be detectable, much less to cause health effects, all that shows is that you have already been exposed to the mind-controlling drugs and are now a helpless pawn of the Illuminati.

However, all hope is not lost for you, my dazed, glassy-eyed friend.  Because the dirty work of the Evil Government Chemtrailers is now being counteracted and cleaned up...

As with many of the topics I stumble across, at first I thought this was a joke, intended to ridicule the people who believe in chemtrails, or perhaps just to calm them down and get them to go back inside and take their meds.  Sadly, it is not.  There is a whole subset of the chemtrail people who now believe that "Air Elementals" -- i.e., good fairies -- are getting up there and taking care of the evil nasty chemtrails for us.

Because clearly there is nothing like a nonexistent supernatural being for dealing with nonexistent bad guys.

As an example from the site I linked above, we have the following letter excerpt from a woman in Las Vegas, identified only as "Sarah C.:"

This morning I woke up hacking horribly and my daughter came to me and said she couldn't breath [sic] very well. So I went outside and sure enough they were spraying all over the place...  They made a huge mess of the sky.  When I first went out it was a clear day with blue skys [sic].  After 30 min of spraying the sky was covered in chemtrails.  I decided to use the power of intention and call on some Sylphs.  I don't think my intention alone was enough, but I think some of them came and did some clean up. In one of my pictures I think there is a Sylph in the shape of a bird...

I think there are some Sylphs cleaning the mess up.  It's been about an hour and a half and the sky is still blue but you can still see the remnants of the chemtrails, they look like smooshed cirrus clouds.   I also took a quick video of the spraying in progress.  I am really horrified that this is going on and no one is pitching a fit. 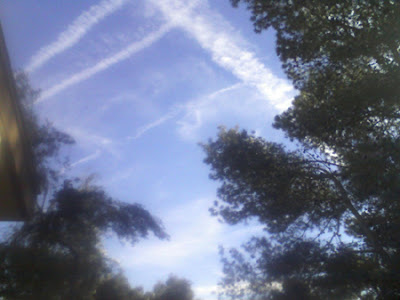 See the Sylph right there in the middle?  See it?

No, neither do I, but it's probably because of all of the mind-altering drugs I've inhaled from jet fuel.  You know how that goes.

Another person, "Bram," wrote in to say that he's helping things along because he built a machine that makes Sylphs:


I built a cloud-buster a couple years, ago....and have been enjoying Sylphs big-time, on a regular basis.  I was on the beach (a few blocks away) yesterday, and just happened to looked up. The sky was filled with these Friends.  It was very heartening.

Oh, I'm sure it was.  And I hope you and your "Friends" are very happy together. 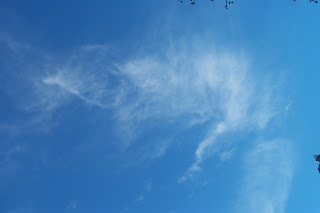 This looks to me less like a "Sylph" than it does like a "cloud."  But once she started editing, cropping, and otherwise monkeying around with the photograph, Ruth found out that what looks like a cloud to the rest of us is actually a Sylph who has shown up to clean up air pollution.  Ready for the edited version that proves her point? 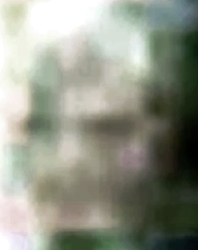 To me, this doesn't look like a benevolent Air Elemental, this looks like Lord Voldemort.  But what do I know?

Not much, apparently, according to Ruth.  Here's what she has to say about it:


Today, for a brief spell, the clouds above us cleared away and I spotted a fingerlike sylph pushing back the clouds, quite literally.  This was after I'd asked them to come and clear away a heavy black cloud over my garden!!

Shortly after this I was indooors [sic] and spotted a face in one of the remaing [sic] clouds, but it was a bit like some of your ghostlike faces, which I find quite alarming (my camera battery was low and so I also didn't get a picture).  Because of this, I asked it to smile and I sent it a smile and as I did so, the mouth space immediately turned upwards and the eye holes narrowed as they would when you smile!!  However, the face faded away almost immediatley [sic] after, as though I had hurt its feelings!!  How bizarre.... all very intriguing!!

Ha ha!  Yes, very intriguing!  Now please excuse me, while I back away slowly, keeping my eyes on you the whole time!

So, this once again indicates the truth of something I've commented on before, namely, that there is no claim so ridiculous that someone can't modify it so as to make it way more ridiculous.  Now, excuse me, but I have to go focus my attention on calling up some Fire Elementals, because it's cold in here.
Posted by Gordon Bonnet at 4:14 AM