The Freedom Festival comes to town

Much was my surprise when I found out that the wingnuts are coming to visit my own home town.

Let me say, at the outset, that my home town is tiny.  It has no stoplights.  Traffic jams consist of times you have to wait for three cars to pass before you can turn into the Shur-Save Grocery Store.  The high point of excitement in my village, and I am not making this up, is the day once a month when the Doug's FishFryMobile parks at the Fairgrounds so you can get takeout fried fish for dinner. 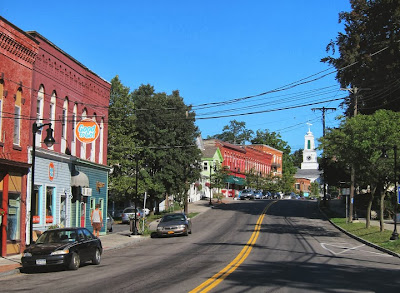 It is not, to put it mildly, a happenin' place.

So I was a bit surprised to find out that we were going to be the hosts of the Finger Lakes Freedom Festival.  Of course, at first, I didn't know what the Finger Lakes Freedom Festival was going to be; from the name, it sounded like it could be anything from a picnic for veterans to a meeting of the local Tea Party members.  The flyer didn't give anything much further in the way of clues:

Share your passion for freedom!  Learn how to preserve it!

Still not much to go on.  Could be innocuous, could be... scary.

My first inkling of what was actually happening came from a student of mine, who said, and I quote, "I think these people are insane.  You might want to look into it."  Then a colleague of mine said that he'd been given one of the flyers by a parent, who seemed a little... intense about the whole thing.

So I started doing some research.  And let me tell you, this is a dog-and-pony show of considerably larger proportions than I realized.

Let's look, for example, at the guest speakers.  Starting with:

Tom DeWeese, who is going to be speaking about "Sustainable Development and the Wrenching Transformation of America."  Again, innocent enough title -- could be a talk by a Natural Resources professor at Cornell, from the sound of it.

Nope.  In fact, DeWeese has been flagged by Daily Kos' "Wingnut Watch," who characterizes him as follows:

At the risk of giving him and his organization exposure, I thought it worth putting up a post here so we can be on the watch for him and his message. If you're serious about wanting to deal with major problems the world is facing - growth, energy, climate - you need to know about DeWeese. Because he's bound and determined to keep anything effective from being done. He's a classic case of Libertarian paranoia gone toxic.

If you're someone interested in seeing your local community adopt policies that save energy, conserve resources, and plan for the long run, Tom DeWeese is there to make sure it's not going to happen. He'll turn you into a communist/internationalist/socialist seeking to tell people what they can and can't do. He'll accuse you of brainwashing their kids, trying to take away their guns, driving jobs out of town, and just about anything he can get away with. He'll help organize all of the local low-information, paranoid folks to stop you. And he'll portray it all in terms of doing the Right Thing, the Patriotic Thing, the American Way.

Then we have Sheriff Richard Mack, the Arizona sheriff who gained notoriety by suing the Southern Poverty Law Center for slander, libel, and defamation, and sued the United States itself on the grounds that the Brady Handgun Violence Protection Act was unconstitutional.

But Mack seems sane as compared to Rosa Koire, whom the North Coast Journal describes as follows: "[Koire is] a 'forensic commercial real estate appriaser' from Santa Rosa who helped found a group called the Post Sustainability Institute. Koire explains how local governments use something called the Delphi technique to brainwash people into believing in such nefarious concepts as smart-growth, environmental stewardship and energy conservation.  'This is war,' Koire declares."


Save lives through education and awareness of suppressed information about the causes, prevention, and recovery from serious chronic diseases such as Mercury Poisoning, Autism, Cancer, Multiple Sclerosis, Alzheimer's, ALS, Diabetes, and other autoimmune and neurological disorders caused by environmental toxins and heavy metals.

That is: chemtrails, anti-vaxx, and so on.

Ultra-right-wing political contributors will include KrisAnne Hall ("The Roots of Liberty and the Bill of Rights"), Michael Chapman ("Our Censored Heritage" and "Education for Sustainable Tyranny"), and Judith Whitmore ("Citizen Vigilance Centers - Holding Elected Officials Accountable to the Constitution").

All in all, it should be good times.

I think what bothers me about all of this is how surreptitious they're being about the whole thing.  The names of the talks don't tell you much; the anti-vaxx, anti-public-education, conspiracy-theorist leanings of these people are being fairly thoroughly smothered under a veneer of respectable-sounding words like "freedom" and "liberty" and "constitutional" and "accountable."  If they aren't trying to hide anything, why don't they come out and be up front about what this "festival" is?

The answer, of course, is that they want to (1) get lots of people to show up who don't know what's going on, in the hopes of catching them off guard and convincing them; and (2) avoid hecklers.  While I can understand (2), (1) really pisses me off, because it smells of being disingenuous.  These flyers are being handed out all over my school, and kids are considering going without knowing the level of propaganda this represents -- and that isn't even addressing the political slant.  As I've mentioned before, I'm neither qualified nor inclined to comment on politics most of the time, but I do know science -- and the claims of these people that are scientific in nature are simply bogus, unsupported, and irresponsible.

I'm probably not going to attend, however.  For one thing, I'm not into seeking out conflict, especially in my home town.  I have to live here, after all.  For another, I don't think anything I say is going to convince any attendees who aren't already convinced.  But I do think it's important to know what you're getting into, if you are a local who's trying to decide whether to attend.

What seems certain is that the agenda is going to have to do with a lot of other things besides "freedom."
Posted by Gordon Bonnet at 2:21 AM