The UFO-and-aliens crowd (and also the conspiracy theorists) currently have their knickers in a twist over an object that showed up on a photograph of the surface of the Moon on Google Moon.  The object certainly is interesting; it shows seven evenly-spaced dots arranged along two lines at what appears to be a perfect right angle.

Certainly not something that looks... natural. 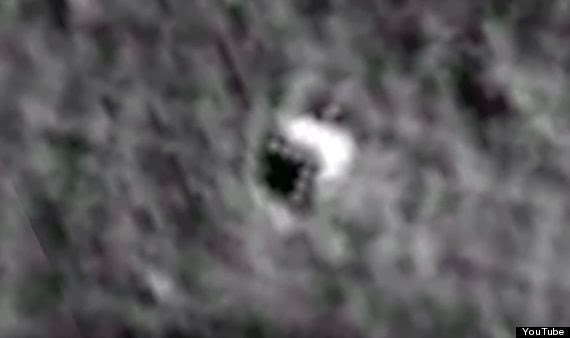 Speculation about what the object could be is running rampant.  So far, I've seen the following ideas:
Okay, I made the last one up.  But c'mon, people; it behooves us to remember that all we really have is a photograph with an odd image on it.  At the moment, we don't know what it is.  So endless speculation about what it is is kind of pointless, because we have exactly one (1) piece of data.

Things like this always remind me of what Neil deGrasse Tyson said, when asked in a talk if he "believed in UFOs:"


Remember what the "U" in "UFO" stands for.  There's a fascinating frailty of the human mind, that psychologists know all about; and it's called "Argument from Ignorance."  And this is how it goes, you ready?  Somebody sees lights flashing in the sky.  They've never seen it before.  They don't understand what it is.  They say, "A UFO!"  The "U" stands for "unidentified."  So they say, "I don't know what it is... it must be aliens from outer space, visiting from another planet."  Well... if you don't know what it is, that's where your conversation should stop.  You don't then say it must be anything.

Now, I know that it's only human to speculate, but what's really important is that we keep in mind that it is speculation... and that of all of the speculation we engage in, we need to be most wary of answers that seem appealing to us.  The answer that seems appealing -- that it's a downed spaceship, if you're an aficionado of UFO lore -- is going to be the one you're the most likely to accept without question, that you're likely to overlook evidence and logic against.

As a philosophy teacher of mine once said, "Beware of your pet theories.  They'll turn on you when you least expect it."

And of course, in this case, we do have a rational (non-alien-based) explanation for the image.  Ross Davidson, a digital image specialist at the Newcastle-upon-Tyne based web development firm OrangeBus, gives the following analysis of the strange image:


Basically it's similar to the thing you get in all those 'UFO videos' you see these days from people with digital cameras - when they use digital zoom too much, you get 'artifacts' as the missing data is recreated using an algorithm which create regular shapes simply because of the nature of digital.

As such a simple point of light becomes something like this.

If he rotated the camera the shape would rotate with it...

You can get similar things with still photos when you blow them up - the moon pic shows a 'triangle' because it's digital - made up of pixels.

If you look at the dark lines in the pic they all align in the same way - it's just a shadow which pretty much aligns with the pixels and when compressed/zoomed looks perfectly triangular.

Not, mind you, that I wouldn't love it if it did turn out to be a crashed spaceship.  If I had to pick one thing that I would love to have evidence of in my lifetime, it's extraterrestrial intelligence.  But thus far, I don't think this is it.  Does it deserve further investigation?  Of course.  Do I think it's a spaceship, or a lunar base, or even a giant pasta strainer?

Remember what the "U" in "UFO" stands for.
Posted by Gordon Bonnet at 3:35 AM