I've always had a fairly good memory -- for certain things, at least.  I usually lecture my classes without notes, for example.  I find that it keeps my teaching fluid, much more so than it would be if I were just reading from a script.  (Every once in a while, though, the technique fails me, and I have to check something, or simply can't remember a particular term -- an occurrence I'm finding ever more common as I mosey my way through my 50s.)

At the same time, though, I'm constantly aware of how plastic and unreliable human memory is.  We form impressions of events, and sometimes those impressions are actually very far from correct.  The odd thing is that these pseudomemories don't seem inaccurate, or fuzzy.  My personal experience is that memories which are flat wrong seem perfectly solid -- until someone points out that facts demonstrate conclusively that what I'm remembering can't be correct.

It is this seeming certainty that is puzzling, and sometimes alarming.  A study back in 2005 by James Ost, a cognitive psychologist at the University of Portsmouth (England), demonstrated all of this with frightening clarity.  Ost took a group of volunteers in England and in Sweden, and asked them if they'd seen CCTV footage of the 2005 Tavistock Square bombing, when in fact no such footage exists.  50% of the Swedish participants said they had, and a full 84% of the English ones did!  Further, when Ost asked the volunteers who had responded "yes" for details about the video footage, they gave surprising amounts of information.  Ost asked one participant, "Was the bus moving when the bomb went off?" and received the following response: "The bus had just stopped to let two people off, when two women got on, and a man.  He placed the bag by his side, the woman sat down and doors closed.  As the bus left there was an explosion and then everyone started to scream."

So, as unsettling as it seems, a lot of what we remember didn't happen that way, or perhaps didn't happen at all.  Not a pleasant thought, but it seems like it's pretty universal to the way the human mind works.

Ost's study makes what I ran across yesterday all the more bizarre.  On a website called "The Mandela Effect," we are introduced to a woman named Fiona Broome, whose interest lies in exactly the sort of memory side-slips that Ost researched.  Her curiosity about such occurrences started when she realized how many of her acquaintances "remembered" that Nelson Mandela had died in jail -- even recalled details of his funeral from news stories they'd read.  But instead of coming to Ost's conclusion, which is that human memory is simply unreliable, Broome has reached a different explanation.

Broome thinks that these represent memories accessed from alternate realities.

"That’s not a conspiracy theory," Broome writes.  "It’s related to alternate history and parallel realities.  Exploring the quantum / 'Sliders' concept further, I discovered an entire world of shifting realities that people try to reconcile daily...  These aren’t simple errors in memory; they seem to be fully-constructed incidents (or sequential events) from the past.  They exceed the normal range of forgetfulness.  Even stranger, other people seem to have identical memories."

What are these "identical memories" that many people supposedly share?  They include:
And apparently, Fiona Broome and the others of her mindset actually think that all of this is better explained by their somehow accessing an "alternate universe" than it is by their simply not remembering stuff correctly.

Even if you buy the "many worlds" interpretation of quantum mechanics -- a conjecture which is far from settled amongst physicists, however many plots of science fiction movies depend on its being correct -- there's absolutely no reason to believe that we still have access to alternate timelines once splitting has occurred.  If that were true, and people could jump back and forth between universes, it kind of throws the Law of Conservation of Matter and Energy right out of the window.  And that law pairs up with the Second Law of Thermodynamics as two of the most fundamental building blocks of our understanding of the universe, and -- more importantly -- they are two laws for which no exception has ever been shown. 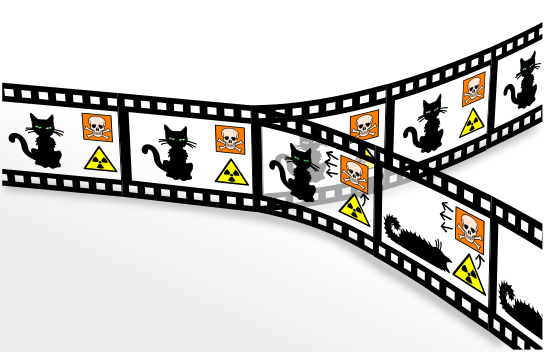 Even ardent many-worlds supporters like Hugh Everett and John Archibald Wheeler believed that once the timeline has forked, the two universes are permanently sealed off from one another.  No information, much less matter and energy, can get from one to the other, which means that if many-worlds is right, there's no way to prove it (this, in fact, is one of the main objections from detractors).  So even though timeline-jumping is a central trope in my novel Lock & Key, I am very much of the opinion that the entire idea rests on a physical impossibility (which is why the novel is filed in the "fiction" section).

Sadly, this leaves Fiona Broome et al. kind of getting sliced to ribbons by Ockham's Razor.  Bit of a shame, really, because it would be cool if we could get a glimpse of alternate universes.  It brings to mind a quote from C. S. Lewis's novel Prince Caspian:


"You mean," said Lucy rather faintly, "that it would have turned out all right – somehow?  But how?  Please, Aslan!  Am I not to know?

"To know what would have happened, child?" said Aslan.  "No. Nobody is ever told that."

It may well be that Broome's conjecture is more appealing than Ost's is; that our memory lapses represent the glittering remains of sideward steps into other worlds instead of simple neural failures.  But unfortunately, Ost's conclusion lines up better with the evidence.  Other studies, showing how easy it is to implant false memories, and how completely convincing those pseudomemories seem, indicate that what's really happening is that we are creating our recollections as we go, and some of them are simply invented from bits and pieces, from suggestions, or out of thin air.

The world, it seems, is far more solid than our memory of it.  So if Sri Lanka appears to have moved to the southeast, as some people apparently believe, then it's much more likely that you simply don't remember your geography very well than it is that you've had a glimpse of an alternate Earth in which the island is anchored elsewhere.
Posted by Gordon Bonnet at 2:11 AM