I hate to break it to you, LiveScience, but in the interest of accuracy, it's probably time to take the word "Science" out of the name of your website.

What you're promoting isn't really science, any more than The History Channel has anything even remotely to do with history.  You're passing along to the public the idea that science is this mushy, hand-waving pursuit, where you can do an "experiment" to support an idea you'd already decided was true, generate essentially nothing in the way of data, and then claim that your results support whatever your original contention was.

I say this in light of a recent story called "Shroud of Turin: Could Ancient Earthquake Explain Face of Jesus?"  If the very title makes you suspicious, then good; you're starting out from the right vantage point.

Let's begin with the facts.  The Shroud of Turin is a piece of linen cloth that has been preserved for centuries as a holy relic -- supposedly the sheet that covered Jesus' body after the crucifixion.  It shows the image of a naked man, with wounds similar to those described in the bible. 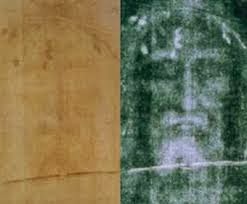 The problem is, the linen cloth was carbon-14 dated -- a step that the religious powers-that-be resisted for decades -- and it was conclusively shown to date to around 1350 C.E.  It is, put simply, a fake.  So you'd think that would be that.

As we've seen before, that is never that when religion enters the picture.

The article in LiveScience tells about a study headed by Alberto Carpinteri of the Politecnico di Torino, in Turin, Italy, which discovered that when you crush rocks using a mechanical press, it can cause a brief emission of neutrons.  From that single piece of information, he concludes the following:
Oh, come on, now.  This qualifies as science?  It's about as bad an example of assuming your conclusion as I've ever seen.  And if earthquakes interfered with carbon-14 and nitrogen-14 levels, then radiocarbon dating would never work, since earthquakes happen basically all the time, all over the Earth.  And yet carbon-14 dating has been shown to be extremely accurate, over and over again.

So you have to wonder why Carpinteri et al. don't just say, "It was magic, and I believe it," and be done with it.  Why all of the scientific trappings?

Well, I know the answer, of course; people these days are getting a little iffy in the firmness of their religious convictions, and science is beginning to hold more sway over people's minds than religious authority does.  If you can convince folks that the science supports religion, you've pulled 'em right back in.

To LiveScience's credit, at least they took the time to talk to an actual scientist, geochemist Gordon Cook of the University of Glasgow.  Cook, unsurprisingly, was dubious.  "It would have to be a really local effect not to be measurable elsewhere," Cook said.  "People have been measuring materials of that age for decades now and nobody has ever encountered this."

However, even though they quoted Cook, the fact that LiveScience chose to publicize this non-science means that they're giving it unwarranted credence, and that's just irresponsible.  A "study" like this wouldn't make it through the first round of peer review.  Carpinteri and his team are relying on press statements -- and sites like LiveScience -- to publicize what is, at its heart, a religious statement of faith.

So the whole thing is a little frustrating.  It won't change anything, probably; the scientists will almost certainly just roll their eyes and go back to what they were doing, and the religious people who want to believe in the Shroud's relic status will continue to believe.

But I maintain: LiveScience, The History Channel, The Discovery Channel, and other popularizers of a pseudoscientific worldview are not doing science any favors by convincing the public that this sort of foolishness deserves to be considered seriously.  I'd almost rather that they stick to Bigfoot, UFOs, and pieces about how the Vikings were alien time-travelers.  At least that stuff is mildly entertaining.
Posted by Gordon Bonnet at 4:53 AM